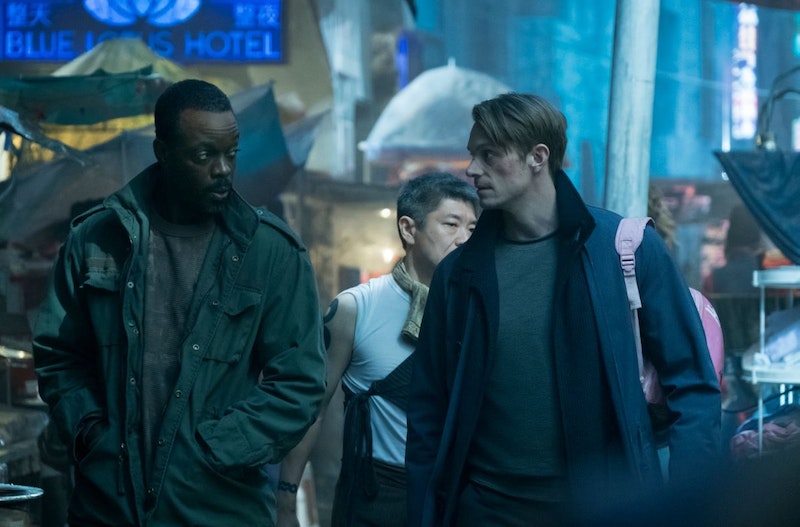 Netflix’s Altered Carbon might have a bright future in sci-fi binge streaming, not because it’s great but because most of the other TV shows and films in its genre are lousy. Try to imagine your favorite Blade Runner knockoffs of the past 32 years. Nemesis might come to mind, The Fifth Element, Gattaca, Strange Days, Johnny Mnemonic, The Matrix, District 9, Chappie, Automata, Elysium, even the Twilight Zone-ish Black Mirror. Without fail, each of them takes a facet of William Gibson’s dystopian vision and runs with it as far as possible—as if there has only ever been one functioning imagination in the room and it’s the duty of subsequent storytellers to mine that imaginative landscape as narrowly and deeply as possible.

The primary difference between Altered Carbon and these others is that it tries, with a great amount of wide-eyed fanboy sincerity, to revive all the clichés simultaneously, working the cyberpunk formula so hard that audiences are at least be able to enjoy a simulation of something vaguely like a William Gibson story. Altered Carbon doesn’t try to be anything other than a derivative. It simply hopes you’ll agree that it has been a very faithful derivative.

By the final episode of season one (which completes the story of Richard K. Morgan’s first novel in the Takeshi Kovacs trilogy), we’ve seen beautiful Yakuza hitwomen, clones in vats, sexbots, cybernetic arms, holographic advertisements projected against an endless urban sprawl, the near-seamless integration of VR-cyberspace and reality, endless rain, lots of full-frontal highly-toned naked bodies, cameras in eyeballs, Silicon Valley levels of debauchery in a technocratic elite, kung fu fighting, and a private detective haunted by the past as he pieces together his fragmented memory. Fantastic. I felt like I was reading Neuromancer all over again, only this time with a plot so strictly indebted to the noir-thriller arc that every turn felt telegraphed.

It’s not bad to use genre elements. There are only so many ways to tell a particular kind of story and if you want to write about sexy androids with supercomputers in their fingernails or grubby urban landscapes in the future that have evolved into disturbing meta-ecologies, you can’t avoid going cyberpunk. But it’s bad when Central Casting determines everything. There should be at least one meaningful unique component to distinguish the story within its genre. Otherwise, it’s not really a story; it’s an advertisement for the thing it’s imitating.

The best things about Altered Carbon (both the Netflix series and Morgan’s 2002 novel, which I finished two days before the show became available) are unfortunately the incidental details. In the book, it’s the narrative voice pitched solidly within the first person detective fiction type but allowed to develop a certain thoughtfulness over time. In the Netflix series, it’s POE, played by Chris Conner, an “AI hotel” that thinks it’s Edgar Allan Poe and steals every scene it’s in; though, POE wasn’t part of the novel at all. These are good, but they’re not enough to make Altered Carbon transcend the genre and become more than just a cyberpunk style piece.

In fairness, Gibson had to distinguish his writing from Philip K. Dick. He achieved this by sometimes writing beautiful sentences and mediating the Dickian future-shock paranoia, absurd technological brutality, and attendant psychosis by including fascinating, sometimes hypnotic surfaces. Conversely, Morgan plays it as safely as possible, creating middle-of-the-road science fiction.

His most cited quote comes from a 2002 post-release interview for the novel in which he formulates what sounds like a general thesis statement for all dystopian sci-fi: “Society is, always has been and always will be a structure for the exploitation and oppression of the majority through systems of political force dictated by an elite, enforced by thugs, uniformed or not, and upheld by a willful ignorance and stupidity on the part of the very majority whom the system oppresses.” Ah so. Now the books, movies, graphic novels, and cultural criticism since Dick published Do Androids Dream of Electric Sheep? finally make sense. We’ve come so far since 1968. Haven’t we?

All in, I wanted to like Altered Carbon as a series, since I didn’t enjoy the novel as much as I thought I would. Having watched the first season, I feel like I’ve spent a long night with a state-of-the-art Real Doll—a lot of work went into producing her but, in the end, she’s still just a silicone replicant with a pre-recorded message.