The Clue to Camp

The 1985 comedy gleefully opens every closet. 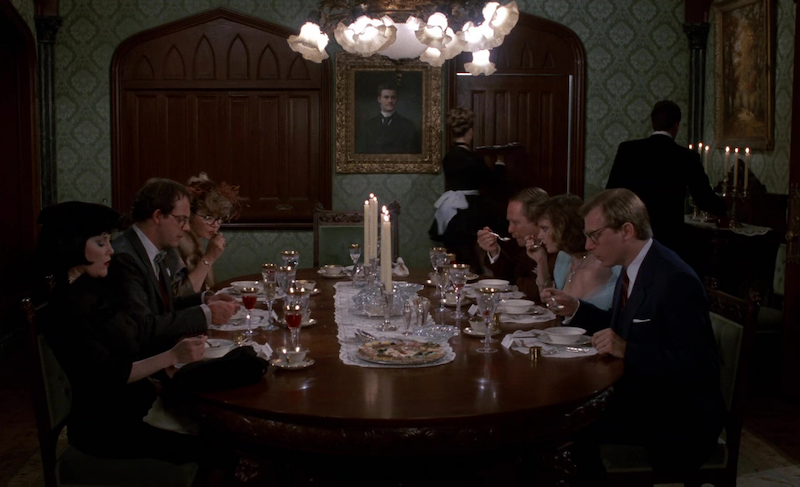 This is the first post in a series on 1980s comedies.

Philip Core in his wonderful 1996 book Camp argues that camp is all about secrets. Camp, for Core, is intimately connected to the closet; in camp, the tension between hiding the truth and openly displaying it becomes an aesthetic effect. Camp is the art of hiding in plain sight, and the process of hiding in plain sight transformed into art.

Core's book is subtitled The Lie That Tells the Truth. That could also have been the tagline for Clue, an arch film that’s one long series of ecstatically knowing winks. Even for a mystery, Clue is hyperbolically jammed with secrets. At the center of the convoluted plot is Wadsworth (Tim Curry), Mr. Boddy's butler (or so he says). Wadsworth was also blackmailed by Boddy; his wife had friends who were socialists ("gasp!" as the assembled cast says.) In order to get out from Boddy's thumb, Wadsworth invited six other blackmail victims to a gothic mansion to confront their tormentor. Wadsworth planned to send Boddy to the police, but someone decides to kill him. Who dunnit?

All the assembled guests have secrets they’re trying to keep quiet, and someone has another secret because they're a murderer. The suspects with double or triple lives include the bosomy maid Yvette (Colleen Camp) and the knife-sharpening cook  (Kellye Nakahara), and the passing motorist, and the cop who shows up, and the singing telegram—everyone, in fact, is someone they’re not, and often, since the film has a series of three multiple choice endings, everyone is more than one someone they’re not.

For example, Miss Scarlet (Lesley Ann Warren) is not really Miss Scarlet—everyone's name within the film is an alias. It turns out that she (whoever she is) is semi-secretly a Washington DC madam; Yvette worked for her and Colonel Mustard (Martin Mull) was once a client. In some endings, Scarlet is also a murderer—and in one she’s the murderous blackmailing mastermind, and her prostitution business is just a cover for ferreting out secrets to sell to America's Cold War enemies. As with Green, Scarlet weaves pretense within pretense—and all her lies are truthful, since, in a film, with an actor playing a part, a revelation of pretense is a revelation of reality.

In films, pretend is pleasure; the audience tells itself that what's on the screen is real in order to trick itself into enjoying thrills and laughs. Clue openly parodies and revels in the filmgoer's frisson of complicity. The last quarter of the film is a virtuoso reprise of everything that's gone before, as Tim Curry as Wadsworth races about the house reenacting the plot as the rest of the cast mills around, an impromptu breathless audience. One of the best moments is when Wadsworth restages the moment when Mr. Green slaps a hysterical Mrs. Peacock (Eileen Brennan). "I had to stop her screaming," Wadsworth intones, perfectly capturing Green's creepy phrasing, somewhere between despair and lasciviousness. Is Wadsworth parodying a gay man, or is he parodying a straight man who has slipped out of (stereotypical) character as a gay man and is trying to undo the error? We're watching Curry as pure theater, giving a line reading that’s completely unnecessary to the plot, but is a pleasure precisely because the layers of mimicry go so deep we're left only with the surface: which is Curry, acting.

Camp isn't just about secrets and surfaces; it's about sexual secrets and surfaces. The pleasure of Clue is in part the open embrace of performance, as in the gloriously chatty ad-libbed monologue in which Mrs. White (Madeline Kahn) admits to her hatred of Yvette—"Yes, I did it. I killed Yvette. I hated her so much, it... it... it... flames... flames, on the sides of my face, breathing... breathless... heaping breaths... heaping." But it's not just the nature of the performance there that's great; it's the repressed, offhand passion. Kahn ebulliently creates sense of a submerged sensuality breaking forth while still being repressed—of heaving bosoms and torrid romance nodded to rather than embraced.

Sex is everywhere and nowhere. There’s no romantic storyline in the film; there’s no actual clasp between lovers. The closest the film gets is a set piece in which, in order to fool a policeman, several characters pretend to be having a party and making out with corpses. "These people are just having a good time; there's nothing illegal about it!" the bamboozled cop exclaims. Perverse sex is normal sex, the closet opens and everyone is happy—as long as the authorities don't know what they're looking at.

The film is full of such intimations of abnormal pleasure quickly denied or deflected.  Photo negatives of Col. Mustard performing unmentionable acts with Yvette are flourished, but never shown; Professor Plum (Christopher Lloyd) tries to reenact them, but is rebuffed. Plum, a psychologist, is being blackmailed for having had sex with his patients. Mrs. White is being blackmailed for having murdered her husband—and specifically for having cut off his head and his penis (when the castration is revealed, all the men cross their legs uncomfortably). "Husbands should be like Kleenex: soft, strong and disposable, White muses. "You lure men to their deaths like a spider with flies," Mustard shouts. "Flies are where men are most vulnerable," White replies, in an elaborately innocent single-entendre.

The sex suffusing the film isn't just in dialogue. Yvette spends the entire film in a preposterous French maid outfit, and Miss Scarlet's dress hugs her curves so closely it's a wonder she can breathe. The film has been criticized on occasion for catering to the male gaze, and it certainly does that—Professor Plum slides his hand to Miss Scarlet's rear, much to her disgust, and the heterosexual men surge around Yvette whenever they have the chance. But the gaze is hardly restricted to a single straight channel. White and Yvette have a charged moment of recognition—and since White murders husbands, when she murders Yvette, there's a sexual implication. Scarlett checks out Yvette's bosom and asks her at dinner what she's keeping warm; the line between the professional madam evaluating charms and simply evaluating charms is deliberately blurred. And every scene with Mr. Green and other men is played for sexual connotations, as men move away from him on the couch.

Each of the three endings concludes with the police galumphing onto the scene to a fanfare of triumphal music. Mysteries are revealed, order is restored, the queer party, with its disordered and excessive passion, is broken up. All the actors put down their parts—supposedly. But the restoration of order is also presented as a campy goof; the FBI agent in charge originally adopts the persona of a Jehovah's Witness warning against sin, and a phone call from J. Edgar Hoover is a reminder that the FBI chief had his own secrets.

If you've got three endings, you've actually got no ending. When the police show up once, the law is victorious; when they show up three times, it seems like carelessness. Communism is a red herring, the actors announce three times in three different endings—but with so many red herrings, you have to wonder if the anti-Communist forces of light are a red herring too. Clue encourages you to imagine a possible alternate closing, in which the sex workers, the gay people, the socialist fellow-travelers, and the vengeful feminists don't get rounded up, but get to keep acting and partying forever. In Clue exposing secrets leads to repression and justice, three times. But that's pretend.