Fat Master and His Murders 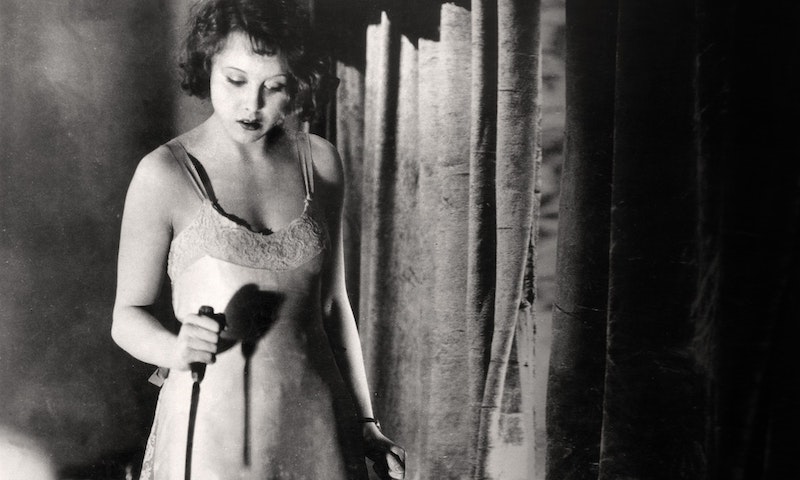 Kino Lorber has two new restorations out now of particular note: Alfred Hitchcock’s Blackmail and Murder!, his first and third sound films respectively. Both have been largely unavailable for a long time, and the DVD’s that existed looked awful. Restorations of relatively obscure films like Alphaville and Buffalo Bill and the Indians, or Sitting Bull’s History Lesson are important not only because more people can see them, but with these 2K and 4K restorations, more people will respond to them.

When I watched Blackmail for the first time, on a terrible DVD, I didn’t think much of it. The image, and especially the sound were so bad that it was like watching through gauze. Remember that all of these movies I've mentioned are by very famous directors. When I see these films restored and presented this way, I think of the thousands of films that are lost. These movies are 90 years old—they’re a tangible link to the past, and to see them so clear and detailed is stunning, no matter the quality of the film itself. These are minor works at best, but for Hitchcock scholars and fans, they are necessary curios for study.

Murder! is a frustrating film because so much of it is taken up by Herbert Marshall’s awful performance. He’s the lone juror to hold out on convicting Diana (Norah Baring) for the murder of Edna Druce, but he gives in and changes his vote to guilty so everyone can go home for the day. And of course he has a change of heart and regrets it later on, staying up at night and distracted during the day deliberating what he should’ve and could’ve done. The rest of Murder! is watching this guy run around like a false Poirot, completely unable to sell the performance or make it convincing and compelling.

As soon as he shows up, the film becomes a rote procedural relying on someone who cannot carry its weight. Murder! is a mix of 12 Angry Men and dozens of other relatively unremarkable Hitchcock movies. The ending presages both Psycho and Saboteur, and the finale is one of the most pitch black and funny setpieces in his body of work: a trapeze artist at the top of a circus tent looking at the cops ready to arrest him below. Without a word, we see him mull over possibilities before nonchalantly tying a noose with a nearby rope and hanging himself before the shocked audience. It’s what makes Murder! more than a stiff exercise.

Blackmail, on the other hand, is full of stellar performances, from leads Anny Ondra and John Longden down to Cyril Ritchard as a washed-up vaudevillian, to Donald Calthrop as a Scotland Yard agent eager to blackmail Ondra’s character, and of course all the fussy old ladies and dense dolts that Hitchcock put in his films throughout his career. Blackmail’s machinations are primitive and too familiar for comfort: this could happen today. A woman has an argument with her boyfriend, she leaves with another man, they go home and he makes the moves on her, she gets increasingly uncomfortable, he makes his move, gets rejected, tries to force her to the ground, she stabs him, he dies, she doesn’t know what to do. It doesn’t look good: her word against the crime scene? What about the boyfriend, is he still “with her” so to speak?

That the blackmail of the title comes later, when a Scotland Yard agent tries to take advantage of Ondra and Longden, goes to show how rotten and convoluted Hitchcock’s view of the world is (Blackmail is one of the few films that Hitchcock adapted for the screen himself). So many people are put in danger and some even die because a man tried to take advantage of a woman. The “blackmail” of the title—the gloves she left at the scene—are only damning if you believe that Ondra’s testimony that she killed the man in self-defense would never hold up in a late-1920s London court. Blackmail is better known and more brisk than Murder!, but they have a lot in common: Hitchcock’s cinema is defined by his fear of false imprisonment, and in these early sound works, the base of his most famous work is laid bare. He would only explore Kafkaesque horror of bureaucracy in such stark terms again in The Wrong Man, his overlooked masterpiece from 1956.

Kino’s restorations are superb, and both movies come with considerable extras: Murder! includes trailers, commentary, an alternate ending, and Mary, a German language version of the film directed by Hitchcock a year later; and Blackmail comes with multiple versions of the film: sound and silent versions (shot simultaneously), both in either 1:33 or 1:20:1, the original aspect ratio. To see them brought back from the dead is truly something else, like putting glasses on for the first time. If only all of film history was treated with such care.