Bart Freundlich’s After the Wedding is Unsuccessful and Inhuman

Great actors flailing with an overwrought clunky script: a movie too boring to be bizarre. D- 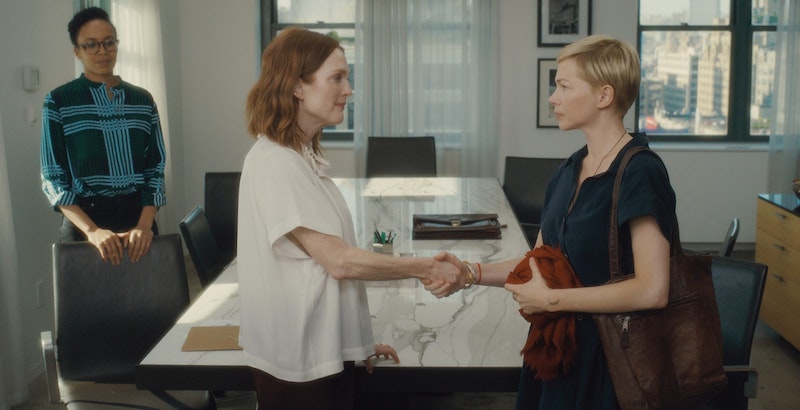 Bart Freundlich’s remake of After the Wedding is a bizarre and unsettling combo of “dialysis-core”—old people, good conversation, good food, and good wine—and “epiphany-core,” unearned and false revelations, melodrama without any of the fun. Only Almodóvar could take a story this overwrought and self-serious and turn it into something engaging, funny, and moving. But Freundlich doesn’t realize he’s making a melodrama, he thinks this is Terms of Endearment when it’s closer to Life Itself without any of the truly surreal flourishes like a pregnant woman getting hit by a bus, or Oscar Isaac shooting himself in front of his therapist, a hysterical Annette Bening (who also gets hit by a bus, in an earlier fantasy sequence… it’s honestly worth seeing). By comparison, After the Wedding has little to offer: it’s slow and feels empty and incomplete. It’s a half-finished house: grotesque and useless.

No one makes it out alive: Billy Crudup and Abby Quinn are usually at least okay, and Michelle Williams and Julianne Moore are two of the best American actors working today. Moore gives a textbook performance, and it’s often easy to mistake her histrionics for other “weepies” and dark comedies she’s known for, like Magnolia, Still Alice or Maps to the Stars. Williams, on the other hand, can’t even manage to phone it in without looking ridiculous. All of her tics and modes are cycled through, as with Moore, a greatest hits sort of performance—but she can’t escape the clunky and often silly script. Her big scenes—stewing, steaming, screaming—want to make her look good and they let her down. There isn’t a sympathetic or even likable character in this movie, and somehow, everyone in a plot as convoluted and high concept as this, acts in self-interest while gaslighting whoever they may be talking to at the time.

Anthony Lane neatly sliced through After the Wedding in his review for The New Yorker: “Isabel (Michelle Williams), an aid worker, flies from India, where she helps to run an orphanage, to New York. She is banking on financial assistance from Theresa (Julianne Moore), the founder of ‘the biggest media-placement company in the United States.’ Things are pretty busy for Theresa, what with her daughter, Grace (Abby Quinn), getting married at the weekend, but she makes time for Isabel, who sits down and launches into her pitch about the youthful poor of India. 'There are over two hundred thousand child prostitutes in the south alone,’ she says. ‘Five times that number suffer from malnutrition.’ Theresa is in the middle of replying, when her assistant interrupts and says, ‘I have the caterers on the line. They want to know if they can use mussels and shrimp in the risotto. There’s a lobster shortage.’ And that, I’m ashamed to say, is when I lost it. Other than arranging for a giant boxing glove with the words ‘BITTER IRONY’ stitched on the front to come bursting out of the cinema screen on an extendable arm and whop me on the nose, there’s not much more that Freundlich could do to signal his intentions.”

In a film with such intense material, and so much attention paid to the script, there’s remarkably little attention paid to details like sound design, staging, and cinematography. I don’t think Freundlich’s direction is very good either; he picks bad takes. After the Wedding feels so unpleasant and strange because so much is missing and it’s lifeless. Pregnant pauses, bad jokes, landmine dialogue, all in a vast digital hell of no depth. It feels computer-generated, assembled by AI from dozens, perhaps hundreds of other movies. Lane is obviously correct as well in pointing out that the movie contradicts itself; at first showing the absurd wealth inequality of Indian orphans to Manhattan business moguls (what does Moore’s company do exactly? I’m not sure Freundlich knows either). But the most offensive thing about After the Wedding is its inhumanity, its lack of self-awareness while handling very difficult subject matter.

Williams and Crudup agreed to abandon and give up for adoption their infant daughter, but by the time Williams disappeared, Crudup had second thoughts and raised her alone until he met Moore shortly thereafter. They had kids of their own, twin boys, and now Moore has brought Williams back from India—knowingly or not—to tie up loose ends before she dies of cancer that she’s been keeping from everyone until, oh, 80 minutes into the movie. The ludicrous dialogue could work in a more venal and cynical melodrama, but watching After the Wedding, one doubts if Freundlich’s aesthetic sensibilities move far beyond Chrysler commercials.

The movie is shot digitally with a bizarre, alien-like roving robot’s eye: not quite Lanthimos’ style of drone cinematography, but just as inhuman and unintentionally off-putting. Because in a movie as emotionally charged as this, the mis en scene and form have a big impact on how authentic everything comes across. Again, Almodóvar can do this. You can go way off the deep end and make a Life Itself or a Collateral Beauty, or you can settle for something in the middle like this, that I can assure you no one wants.