The Quibbits' Go to the Movies

Nicky took us the movies on Monday. 🤗 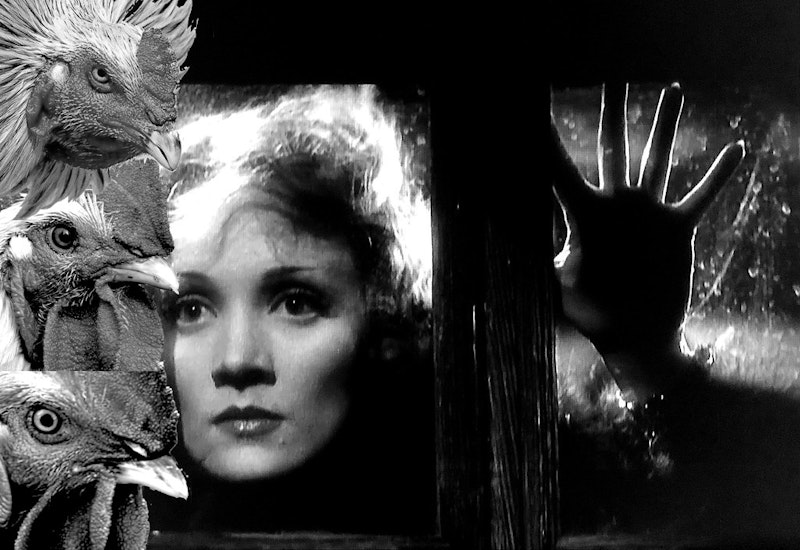 Monica: Nicky took us to the movies to see Marlene Dietrich in Shanghai Express. We loved it; Rooster and I are big fans of German Expressionism, particularly in the cinema. I remember seeing Josef von Sternberg cart an orphan girl onto a set once in 1938, visiting Los Angeles, and ever since I’ve always associated him with wheelbarrows. Who knows whatever happened to that man? He was gone after Marlene was gone.

But I digress—I’m the cinephile of the two of us, Rooster and me. We have our fun, but if you look at it straight (and I do), I’m the one that knows about world cinema. I’ve seen The Apu Trilogy. I’ve seen Greed. I’ve seen Sátántangó twice—once in its original Hungarian run and once more in New York on holiday. Rooster never came. He was always out “looking for paper birds,” people to write about. People forget about the momentum he had in the mid-1950s: Freeze or I’ll Shoot You Red! was his first published book of fiction and a surprise bestseller, vacuumed out of happy bookstalls by rowdy youths in knitted pajamas looking for adventure and guns and girls and violence.

Rooster’s a brilliant mechanical writer, the best I’ve ever met or read by a long shot no contest, but sometimes he gets stuck. Often he gets stuck. This is a problem, and has been a problem since we met. Of course these slumps and depressions are followed by magnificent bursts of productive creativity that somehow make our lives possible, and these novels come. Pulp fiction. He could write it in his sleep, and has. I never bother the claw reaching for the quill.

Rooster: I’d like to dispute something my wife said. I am not a dilettante, nor am I cinephile. I’m a mild appreciator of all things, but of living things first and foremost. Perhaps my beloved has taken too much tack from our bastard relative Bennington, and perhaps her increased levels of pettiness are his fault. I resent him for that, we all do. But whether or not my wife’s mood was affected by my cousin’s behavior, she is wrong. I am knowledgeable and curious and eager to engage deeply (deeply, Russ) with all of world cinema. I have also seen The Apu Trilogy, and I found it boring. Sue me. Shanghai Express, on the other hand, hoooooooo-boy! MARLENE WAS SO BEAUTIFUL.

Monica neglected to mention that we met Marlene Dietrich once in a Paris book stall, early-1980s: she was incognito, already a recluse for the rest of her life, looking for something and getting increasingly frustrated. She asked the clerk if they had something, neither of us could hear the title, but after looking flustered, the clerk went in the back and got a brown paper package for Marlene. She took it and left without paying, and the clerk didn’t bat an eye. He looked scared, slightly disoriented. When we went to ring up, he checked us out mindlessly, sinking deeper into his 1000-yard stare, so I took the opportunity to “borrow” a few items from the checkout counter. It’s always fun to steal in Paris.

Nicky didn’t take us to the movies, we asked him to go. He doesn’t even like movies or sitting still for longer than five minutes—he has a burrowing reflex—but we hadn’t seen him in a while and wanted to catch up. I gave him the completed manuscript for Always a Stone and eagerly await his opinion. But yes, he did accompany us to see Marlene Dietrich in Shanghai Express because he’s a good friend, and not at all concerned about my well-being or reliability. He knows I’m good for all those articles I owe him. He knows my book is sure to be a masterpiece after waiting for so long to read it. But does he know how much I love him? I don’t think so, and I won’t be the one to tell. It’s for him to find for himself. My love…

Bennington: Nicky sucks, Rooster sucks, Monica fucking sucks. Bitch. Whatever… we all went to the movies on Monday for some reason. Stupid way to spend a night in Baltimore, heroin capital of the east coast. I was looking to get loaded on Xans and Percs but the fucking cinema gang decided to go sit in a dark room for 80 minutes and watch an old movie. Who does that? It was in black and white! I wanted to be smoking cigarettes and hoovering lines off some whore’s ass. How did I end up here? Family obligations. I’ve been in the doghouse for months now because everyone’s against me and no one respects me anymore. They say I’m not manic anymore but I have to disagree, because I acted quite foolish at the movie theater. I demanded popcorn, and I received candy. This was a problem. But I sat, I stewed, and eventually I left. I walk a lonely road, the only road that I have ever known. Don’t know where it goes, but it’s only me and I walk alone…

The only thing I remember about Shanghai Express are the three un-simulated “chicken” deaths early on. They get run over by a train, the titular Shanghai Express. I wish it blew up but it never did. They killed the evil Chinamen, but no one was held accountable for the death of these birds. On one hand, it’s disgusting: it shows how far we have to go in a man’s world. On another hand, I crave death, and in that moment, I wish I were one of those chickens, so that I could finally leave this earth screaming, bloody, and mutilated.