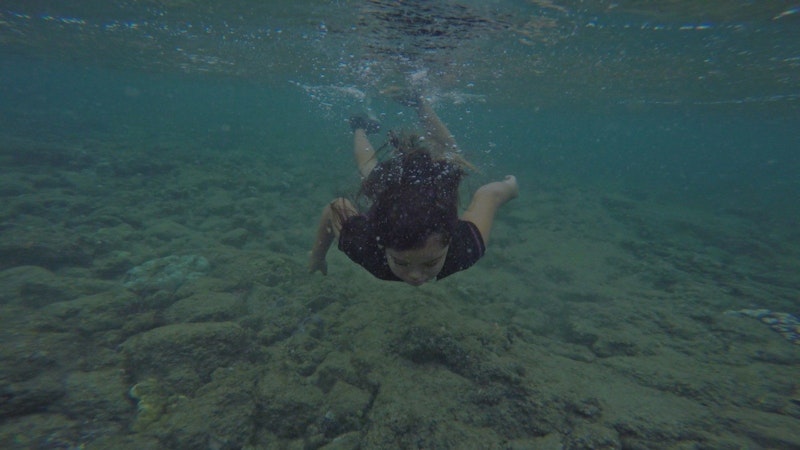 Hawaii is a perfect microcosm of Earth in revolt: a planet going through an unprecedented era of humanity-influenced climate change. The islands are one of the most bio-diverse ecosystems, situated in a chaotic patchwork of environments: lava flows, dense jungle, mountain forests, dried, alien lava plains bereft of vegetation. The microcosm is so dramatic, varied, and unique—an outsider cannot help but get a sense of Hawaii as earth at its most terrestrial. Through the lens of a visitor, the geologically young land and raw power of ocean and volcano could give a sense of being marooned on some distant planet.

Recently, I saw two independent features both produced on The Big Island: Swarm Season, a kaleidoscopic documentary by Sarah J. Christman and Stoke, a visually-stunning road trip movie across the Island’s elementally chaotic landscape produced and written by Zoe Eisenberg. Both features dealt with themes of humanity’s alienation from the land, our reactions to an ever-changing planet, and the consequences of varying levels of apathy and engagement.

In Swarm Season, hexagonal telescope mirrors echo the perfectly constructed wax hexagons of honeycomb at a bee rehabilitation farm. On top of a sacred mountain, space telescopes looks to Mars, exploring an option of leaving behind an earth exponentially eroded by humanity. In the valley below, beekeepers work to rehabilitate and fight to conserve the earth, the only home we know. On the slopes around the Big Island’s Mauna Kea, a dramatic divide between unbridled technological progress, and a conservation attempt to commune with a natural world we have become increasingly alienated from plays out every day. Colonies of honeybees and clusters of stars in newly discovered galaxies.

The huge telescope facility on Mauna Kea is embattled in protests from the local populace. In an ongoing struggle (as recently as August 10), scientists bemoan how protestors are halting research at the telescopes (researchers are still able to go up to the mountain-top while it remains off-limits to locals who would want to summit for pilgrimage reasons). Nearby the telescopes, there’s a training camp for would-be astronauts that simulates a colony on Mars. The volcanic and bare face of Mauna Kea is appropriately otherworldly and the cadets simulate delays in communication (emails that take a few days—a week to send) and the isolation faced by such a team.)

Down the mountain, the protestors assemble, still fighting to protect a sacred summit of their homeland. The parable is too on-the-nose: while the bee conservationists and protestors work to stem the tide of rapidly expanding tech and the endangerment of earth’s species, scientists on top of the sacred peak look to the stars and prepare for a post-earth scenario. This sort of thinking is typical with many people cockily thinking there would be a tech solution to havoc yet to be wrought by climate change, including the overconfident Elon Musks of the world.

Last week, the White House relaxed its enforcement protocol in protecting endangered species protected under the ESA of 1973.
While meandering at some points, Swarm Season raises timely ecological considerations without preaching. The sound design of the movie flows organically from one scene into the next, hearing the swarms of rehabilitating bee colonies before they appear on camera, or the winding hydraulics of a massive space telescope as a soundtrack for worker bees constructing honeycomb like an insectoid alien race.

Stoke, a Big Island indie with more of a focus on the comedic-melodramatic adventure of two hapless local tour guides and an averse tourist, explores the disconnection humanity has from our natural world. A disaffected, grieving, appropriately-LA woman Jane (played by Caitlin Holcome) goes to Hawaii on a search for closure after the tragic death of her fiancé “Graham.” She bumps into bro-y local man-children Dusty and Pohaku (Kauhane Lopes and Randall Galius Jr. respectively). As the three road-trip across the island to a remote lava flow, their highs and lows seem to be a reflection of the inevitable chaos of Hawaii’s primordial and beautiful landscape.

The acting takes a lot of faith to get through some scenes—however, the characters do manage to get some affecting points. Stoke gets to some core, Sirk-esque displays. While Galius Jr.’s character initially seemed like he’d be the buddy/comic relief, he has some real moments of grief—in fact, the most painful, dramatic moments of the film give the characters much-needed believability. They’re real people, not just the American Pie-core caricatures they inhabit during some of the lighter, farcical scenes.

The film benefits largely from being independently conceived in Hawaii. It’s not an Eat Pray Love where the white outsider is saved by something exotic, seen through her eyes. It’s a story from the other side, from Dusty and Po’s struggles in connecting to others as well as the sacred land of the Big Island itself.

The spectacular cinematography goes a long way to further ground these characters in a place that’s at once magical and indifferent. It’s a crucible of Platonic elements: the fire of the earth bubbling forth as lava, cooling in the ocean, releasing steam and ash into the air. The environs of the Big Island are one of chaos frequently thwarting expectations. It’s at times beautiful and serene, magical and alluring, but also destructive, raising towns and vegetation. Eventually the jungles rise to cover and rejuvenate these cooled lava fields with all the nutrients and minerals brought up from deep inside the earth.