Ready or Not is a Gem

Like The Hunt, this is a movie about people hunting other people, with echoes of Get Out's sociopolitical satire. A- 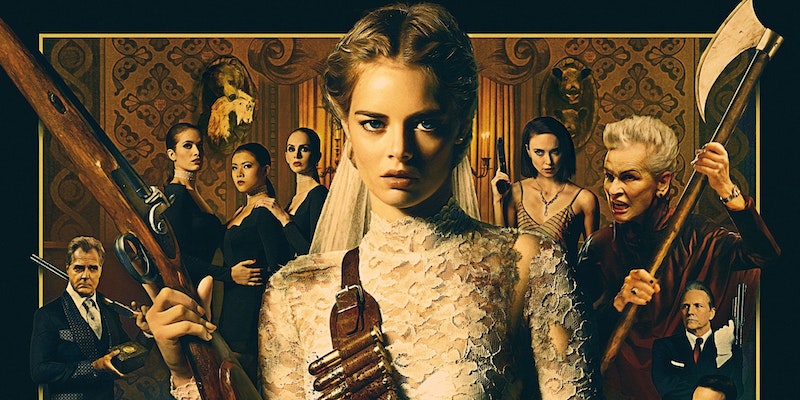 Ready Or Not didn't sound promising. It's a mid-August release, a horror comedy/thriller with a logline that's best summed up as "Get Out, only without all the racial elements." And it comes from Fox Searchlight, a studio with an uncertain future following its acquisition by Disney, which doesn’t have a great track record with this sort of movie.

Despite that, Ready Or Not is a pleasant surprise, a total hoot. The new season of HBO's Succession may be 2019's best piece of entertainment that's about plutocrats acting like total monsters, but Ready Or Not comes in a close second.

Directed by Matt Bettinelli-Olpin and Tyler Gillett, from a screenplay by Guy Busick and R. Christopher Murphy, Ready or Not is yet another story about an outsider brought in by marriage to an eccentric family.

The hook is that Grace (Samara Weaving) is getting married to Alex (Mark O'Brien), at the sprawling estate of his weird, wealthy family, a family Alex swears he keeps at arm's length. Per tradition, anyone new entering the family has to "play a game" at midnight of the wedding night. It's a nod to the family having made its money from the games business, possibly through extra-dimensional means.

It soon becomes apparent that the family is playing a not-so-friendly game of hide-and-seek, and the bulk of the film consists of the family and Grace running around the house trying to kill each other.

Ready or Not sounds from its description like a one-note horror film, but it's actually a delight. Not only is the fighting well-staged in an immaculately production-designed house set, with old-school weapons like axes and crossbows, but small moments of dialogue throughout hint at buried family dynamics. The film also uses music in an outstanding way, and some viewers will notice a continuing Beethoven motif throughout.

The script knows it's ridiculous and leans into that, thanks to some ludicrous, delightful overacting from the likes of Henry Czerny (playing the family patriarch) and Nicky Guadagni, who all but walks away with the movie as an especially creepy mean aunt. Kristian Bruun also steals multiple scenes as a smug brother-in-law who has to use a YouTube tutorial to learn to use his crossbow.

Weaving, the niece of Hugo who also played the husband's mistress in Three Billboards Outside Ebbing, Missouri, does impressive work. She starts the film wearing a full wedding dress, which gradually gets destroyed over the course of the plot, and she successfully sells everything. And after all that, the ending is especially satisfying, leading up to an outstanding punchline.

Ready or Not isn't as overtly political as the similar Get Out, but it does toss in sharp satire about the 1 percent being unfeeling sociopaths. It's a movie about people hunting other people, yet for some reason The Hunt got its release cancelled and this movie didn't. I guess it helps that Trump never tweeted about it.