I’ll explain how in a moment; right now, there’s something in my eyes. 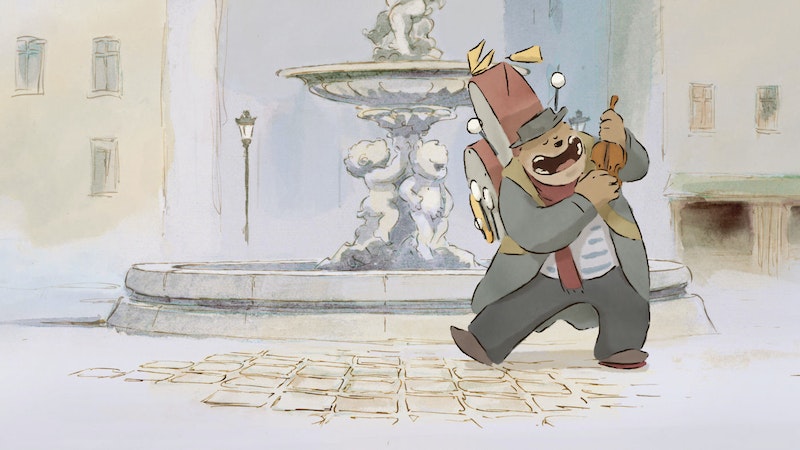 Something unusual happened to me at the end of Ernest & Celestine: I cried. Out of nowhere, tears welled up, unbidden, at the corners of my eyes, dribbling down; this emotion came totally out of nowhere. It was a first. Most of the time, I’m not an demonstrably emotional person, and no movie in the past has had this serious an effect on me. In fact, the only time I can recall anyone weeping at a picture was a lifetime ago, when Mom and I saw Glory, and Mom broke down as Confederate soldiers slew Matthew Broderick, Denzel Washington and Morgan Freeman in hazy slow motion. Perhaps, then, Ernest & Celestine is my Glory, though the two films are very different.

Ernest & Celestine operates on a variety of levels. On the one hand, it’s an animated children’s picture. On the other, it’s an Edible Bouquet for cinema and societal critics. On yet another, it’s a soft-shell Bonnie & Clyde re-dux. On still another, it makes for a quiet argument against whatever label applies to the heavy-handed, bitrate-engorged style of animation reigns supreme in the Disney/Pixar industrial complex. First, its use of color is downright painterly, all bright, stark vistas and midwinter gloom, bursts of flame in dark spaces, greens that pop on the screen, and so much else besides; all of this is accompanied by judiciously applied bursts of score and lean, effective dialogue. This is one of the most beautiful, inventive animated movies you will ever watch.

The setting, a French village and its outskirts, belies that this is a French production with the voices of American actors dubbed in for stateside consumption. Nonetheless, the milieu is a recognizable one: a quasi-modern downtown, a sprawling countryside. Here we have one world, separate but unequal: aboveground, a society comprised of bears, and below ground, a mirror-image culture of mice. An extended opening, featuring the voice of Lauren Bacall as a scenery-gargling mouse governess-cum-hag, provides the lay of the land: bears eat everything, especially mice, so mice should avoid bears at all costs. On the bears’ end, this feeling is mutual, as evinced by a comic scene in the first quarter where two bear parents (Megan Mullally and Nick Offerman) prep their son for a visit from a mythical mouse tooth fairy, then completely lose their shit when an actual mouse appears in the bedroom.

The mouse in question is Celestine (voiced by Mackenzie Foy), who is tasked with stealing bear teeth and providing them to a mouse dentist below ground; the teeth are then implanted into other mice, whose labor is largely dependent on the strength of teeth. It’s an internship, really, and the more successful Celestine is, the more likely it is that she’ll become a dentist herself—which would be fine, except that what Celestine really wants is to be an artist; the scenes of her sketches scattered hither and fro by indifferent elders are both thrilling and dispiriting.

The chaos of the encounter with the bear family leaves her stuck in a trash can overnight, until she’s found by a foraging bear named Ernest (Forest Whitaker, firing on all cylinders), a panhandling entertainer—he sings, he plays instruments, etc., to utter indifference and law enforcement interference—who’s broke, hungry, and otherwise at the end of his string. A bit of bartering ensues: Celestine offers to point Ernest in the direction of food, if he will agree not to eat her. So begins a ping-pong game of deals, escapes, madness, and high-speed chases that culminate in an unexpected friendship between bear and mouse. The duo become wanted fugitives on above and underground levels, holed up in Ernest’s remote ruin of a house, until their escapades ultimately catch up with them, evoking Ernest & Celestine’s most heart-wrenching moments and a denouement-with-a-message with societal overtones. Not timely overtones, mind, but timeless ones.

Each title character has dreams that dramatize his or her inherent alienation. In Celestine’s, a swarm of accusing mice swell into a menacing, monstrous beast that’s reminiscent of some of the implicitly racist or scaremongering bear imagery from early in the film. In Ernest’s—a fever dream that comes about as a result of snowflakes tumbling through a hole in his ceiling—he feasts merrily on candies, cupcakes, and other sweets, until a horde of mice start nibbling on his treats, threatening to then consume him. There’s an uncomfortable scene, where the leads, holed up in Ernest’s house, transform the adversarial relationship between their opposite cultures into art: Celestine asks Ernest to pose as a deranged marauder, which she paints him as such; Ernest holds the pose as requested, but you can sense him growing tired, his limbs heavy.

Buried within the subtext is a meditation, too, about class. Though the police, bear and mouse alike, are white—fur color in this movie deserves its own graduate-level dissertation—the self-righteous characters, put-up literally or in their own minds, in Ernest & Celestine are out-and-out bourgeois straw people: the judges, the lawyers, the dentist, and the parents of the bear who we met at the beginning. Mama Bear sells teeth to bears, while Papa Bear operates a candy store. There is a scene where Baby Bear, incognito, tries to buy candy at his father’s shop, and is dressed down for it. Later, at dinner, the facts of life are explained: Papa Bear sells the treats, which rot teeth, then, across the street, Mama Bear sells teeth to those whose teeth have rotten and fallen out.

This last is conveyed in no-harm, no-foul cause and effect to Baby Bear, who is to inherit both businesses, someday; he accepts it grudgingly, spearing a pea, as both proper parents depart the dinner table to turn in early, pleading exhaustion. It’s the way the world works, the parents insist, and the plainness is as chilling and empty, by contrast, as the bohemian, low-rent cohabitation of Ernest and Celestine is soothing. Theirs is a father-daughter dynamic of imagination, music, laughter, and play—the scene where Ernest dons clown’s garb and pedals a unicycle is golden—and as their fears dissolve into encouragement and light, you’ll find yourself rooting for their version of a nuclear family to somehow triumph over that of the town bears on a wider scale. I've deliberately sidestepped details of the end of the movie, because I don't want to spoil the experience, but I will say this: bring tissues.