On Elvis & Nixon and Sing Street. 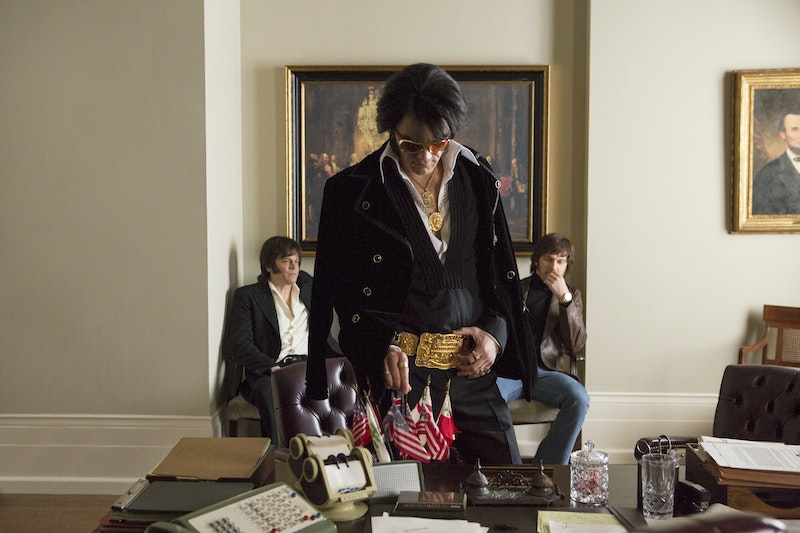 Elvis & Nixon is the heavily fictionalized story of a meeting in 1970 between two of the world’s most famous men. It doesn’t approach the material with a lot of gravitas; it takes a handful of wrong steps and won’t go down as any kind of classic. But it’s still hugely entertaining, and often hilarious.

Directed by Liza Johnson (best known for 2013’s Hateship, Loveship) Elvis & Nixon features a pair of great actors doing less-than-uncanny impressions of the titular icons. Michael Shannon is Elvis Presley and Kevin Spacey is Richard M. Nixon, and while neither is the best cinematic representation ever of Elvis or Nixon, both have a great deal of fun with the parts.

The story, in the movie as in life, was that in late 1970 Elvis, a rock icon of a decidedly earlier era, has grown antagonistic towards the counterculture, the drug aspect especially. So he came up with the scheme of demanding a meeting with the president, in order to demand a “federal badge” in order to go undercover and bust drug dealers. The pop culture-averse Nixon initially wanted no part of the meeting, but was convinced that the support of Elvis would help him politically.

The first half of the 90-minute film covers the machinations leading up to the meeting, while the second shows the meeting itself. And because Nixon didn’t fire up the White House taping system until the following year, there’s no record of what was actually discussed, so the film gets some artistic license and uses it.

Elvis & Nixon may not have a lot to say about either Presley or Nixon, or the nature of fame or celebrity, or anything political. But that’s okay—the film knows just how absurd the story it’s telling was, and isn’t afraid to use a light, breezy tone. Frost/Nixon, this isn’t.

Shannon may not look especially like Elvis—he’s too tall, and way too skinny to play the King in 1970—but he gives such a convincing performance that the non-resemblance stopped bothering me after about two minutes. It’s a charismatic, engaging turn, and not only because just about every character who meets him just stares in disbelief.

Spacey, meanwhile, does more of a straight impression, one that gets the voice and mannerisms just right. And for some reason, Spacey looks not much like Nixon when photographed from the front, but exactly like him from the side. The supporting cast is less successful. Alex Pettyfer and Johnny Knoxville play underlings of Elvis’; not only is Pettyfer’s subplot about being torn between Presley and his girlfriend a waste of time, but the actor is the same cipher he was in Magic Mike. And Knoxville gets to do just about no Johnny Knoxville things.

Meanwhile, Colin Hanks and Evan Peters play baby-faced, somewhat bumbling Nixon henchmen, at least until we remember that the characters—Egil Krogh and Dwight Chapin—would both land in prison several years later for their Watergate misdeeds. And Tate Donovan plays H.R. Haldeman in one scene, but let’s just say he’s no James Woods. The biggest flaw in the film is that it sometimes gets too cute, with dialogue that foreshadows future events with the subtlety of a hammer.

Irish filmmaker John Carney has developed a unique niche in the last 10 years: earnest, sweet romantic comedies based around the writing and performing of original music. He started with 2007’s great Once, and followed that with 2013’s Begin Again, a less successful Hollywood-ized version with big movie stars. Now Carney has completed that trilogy with a return to low budgets, no stars and Ireland.

Set in the depressed Dublin of 1985, Sing Street features no well-known actors other than Aidan Gillen (from The Wire and Game of Thrones) and Maria Doyle Kennedy (the evil ex-wife from Downton Abbey). The film tells the story of a Conor (Ferdia Walsh-Peelo), a teenager who starts a band with his friends in order to impress a girl (Lucy Boynton). But because it’s 1985, starting a band entails shooting a music video for each song. The film’s great running joke is that the boys continually hear new bands as they break through (Duran Duran, The Cure, Hall & Oates and more) and adjust their musical style and hair and clothing accordingly.

The songs, written by a coterie that includes Carney and Once star Glen Hansard, are hit-or-miss; it isn’t the top-to-bottom triumph that the Once songs were. But what breaks through is the charm, whether it’s the love story or the relationship between Conor and his older brother (a scene-stealing Jack Reynor). The last scene is especially well done.

Sing Street is no Once, but it’s a huge improvement over Begin Again, and a must for anyone who cares about the pop music of the mid-80s.