Leave this one in the drawer. 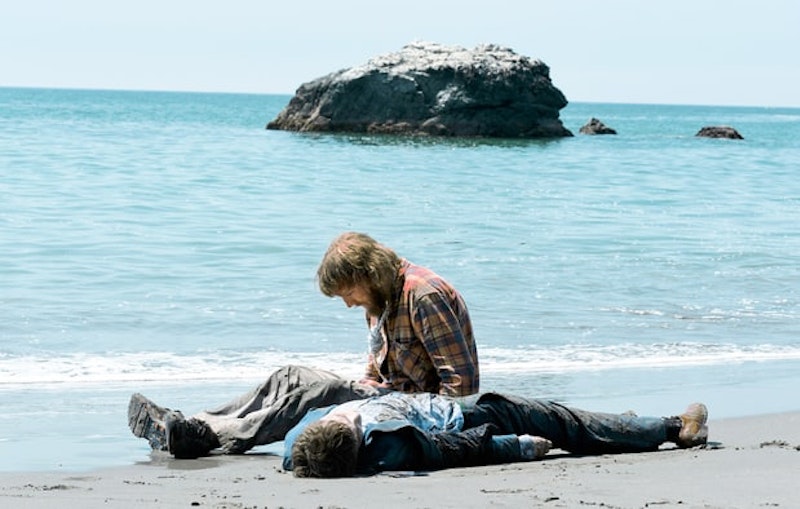 Is Swiss Army Man the Strangest Movie in Sundance Film Festival History? Not by a long shot. Reading that Vanity Fair piece back in January, I was expecting something caustic, aggressive, and confrontational—Vincent Gallo on the beach! Even the recent press has been misleading, with references to Stanley Kubrick, Terrence Malick, and Michel Gondry. According to Vanity Fair, “Swiss Army Man is a comedy so head-scratching-ly surreal that even the Sundance Film Festival programmer introducing it on Friday afternoon confessed, ‘I’m not sure what this is about, but I thought it should be here.’” Is this the same movie I saw? Swiss Army Man is high-concept and surreal, but it’s not particularly dark, strange, insightful or perplexing. “I’m not sure what this is about”? Well, take a look at the film’s slugline synopsis by directing team Daniels: “A suicidal man tries to convince a corpse that life is worth living.” This film is trite, obvious and utterly basic.

The premise is great. Hard to screw up? Definitely—if you’re in the mood for existential insight or mind-bending surrealism, look elsewhere. Paul Dano’s character is stranded on a desert island, and the film opens with him preparing to hang himself by the beach as the waves lap and no one comes to save him. He’s just about to slip into the noose when he sees a corpse (played by Daniel Radcliffe) suddenly appear on the beach. He rushes up to the guy, gray-white and ragged, and ends up taking the belt off his suit to make another noose. Suddenly, the corpse is animated with seizure-like flatulence, and Dano manages to ride the body’s jet turbine ass to shore somewhere else. Out of hallucinatory loyalty, he lugs the body around with him, and the further they go into the woods looking for civilization, the more lively and animated Radcliffe’s corpse becomes. At first, he just parrots back what Dano says, but eventually he comes to comment on the things around them—junk food wrappers, porno mags, pizza boxes—with childlike curiosity and naïveté. What is garbage? Why do people throw it away? Why do I need to eat food? What are boobs? What is love? Why is my penis doing that?

Daniels’ “incredibly personal” film is full of junior-high profundities on how hypocritical society—why can’t I fart openly in public? Why can’t I just ask her if we can fuck? Why do I have to hide so much of my natural self? Go smoke your first joint, dude. This is sub-Donnie Darko bullshit. It’s not a challenging or strange movie at all—the multiplex is full of high concepts and big name actors. The message isn’t anymore complicated than (500) Days of Summer or Bridesmaids. Uh… “be yourself”? Is that really all you’ve got? Good going, guys. Best part of Swiss Army Man is how much Daniel Radcliffe’s corpse resembles the “Charlie” puppet from the Interpol music video “Evil.” Leave this one in the drawer.