A Terrible Franchise and the Year's Weirdest Movie

On Alice Through the Looking Glass and The Lobster. 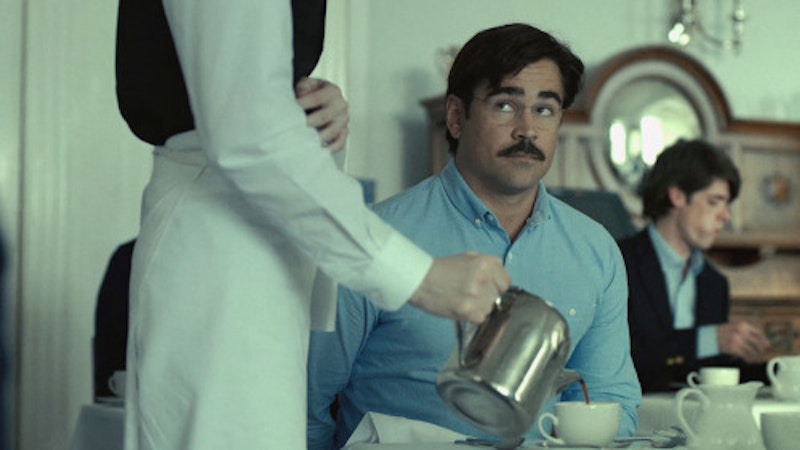 I strongly disliked Tim Burton’s 2010 adaptation of Alice in Wonderland for several reasons, but mainly one: it was yet another instance of Burton making a lazy remake of a many-times-adapted-already property, once again starring both Johnny Depp and Helena Bonham Carter. Burton’s a creative and talented director, who could be making much better use of his abilities than another Dark Shadows, Charlie and the Chocolate Factory or (worst of all) Planet of the Apes.

There were other bad things too: The film’s 3-D candy-colored look was an assault on the eyes. It made Mia Wasikowska, as Alice, into a passive protagonist, and the plot had little to do with the actual source material. Of course, the movie, unlike Burton’s other fifth-generation adaptations, made a truckload of money, so now we have a sequel. And it’s much worse.

Burton is not the director this time and listed only as a producer; he’s said to be working on, I’m not kidding, a live-action adaptation of Dumbo. He’s replaced by James Bobin, who directed one movie—2011’s The Muppets—which I’ll cherish for the rest of my life. There will be no cherishing his Alice film, however; it’s among the more excruciating movies in recent memory.

Alice Through the Looking Glass takes all of the bad things about the original and makes them even worse. The plot still has almost nothing to do with the source material, and Alice is still (with a couple of minor exceptions) a passive presence in the story, played by an actress who, at 26, is probably too old to play Alice. The color scheme is ghastly and garish. And most egregious of all are Johnny Depp and Helena Bonham Carter, who are playing the worst characters in their careers, which is quite an achievement.

The plot hinges on the happiness of Depp’s Mad Hatter, a problem because Depp’s Mad Hatter sucks. As the Hatter, Depp looks terrible and sounds even worse—I was actively rooting against him. Meanwhile, Bonham Carter’s Red Queen—played in an uncanny valley-like abomination of half-CGI—is the same screeching buffoon she was in the first movie, except this time they’ve tried (and failed) to make her sympathetic.

The rest of the cast consists of the usual characters (led by Anne Hathaway’s White Queen) that have essentially been demoted to Greek chorus status. There’s also Sacha Baron-Cohen, continuing his long decline as “Time,” played for some reason with a Schwarzenegger-like accent.

In addition to its seemingly endless supply of Marvel, Lucasfilm, Pixar and Disney Animation movies, Disney has also been pumping out both live action versions of its own cartoons and other classical properties. The most recent itineration of The Jungle Book wasn’t bad, and the live-action Beauty and the Beast, complete with the great Menken/Ashman songs, looks to have potential too. But the Alice movies may be the worst franchise currently going, at any studio.

The Lobster, the year’s weirdest movie, is also one of its best. It’s a satire that’s actually biting, and satirical of something not typically satirized. It doesn’t entirely hold together, but boy did I love this.

Here’s the great conceit: The Lobster is set in an alternative universe in which monogamy is enforced by the state. Those who refused to pair off into couples are sent to a luxury resort, where they’re served Communist-style pro-marriage propaganda. If they fail to pair off within 45 days, these unfortunate singles are turned, permanently, into the animal of their choice. And not only that, but every animal in the world is a former human who has a veteran of this process.

Into the resort steps David (Colin Farrell, with a pronounced paunch and none of the movie star affect that you’re used to from him.) Accompanied by a dog who used to be his brother, the recently divorced David befriends denizens played by John C. Reilly and Ben Whishaw, while trying to game the dating system. To become part of a couple, you must share a salient trait with your partner, whether it’s nosebleeds, a limp, or sociopathy.

The film’s other half consists of a woods-based resistance to the hotel regime—led by warring leaders Lea Seydoux and Rachel Weisz—which also isn’t what it appears to be. And the ending is one of those ambiguous cliffhangers meant to get moviegoers arguing.

The Lobster is the first English-language film from Greek director Yorgos Lanthimos, best known for the Oscar-nominated Dogtooth. He gives the film a gritty, ugly look that fits the themes perfectly. And the gimmick, especially the part about people-turned-animals turning up in various scenes, lends itself to repeated viewings.

Farrell is outstanding here, in his best performance since In Bruges 10 years ago. This is the comeback for him that I guess the ill-fated second season of True Detective was supposed to be. The Lobster isn’t perfect—some of the stunts are too cute—but its premise is so delightfully audacious that I didn’t mind.