Terror From The Year 5000 (1958) tells the story of two impatient neurotics whose attempts to manipulate the future create only chaos and horror. 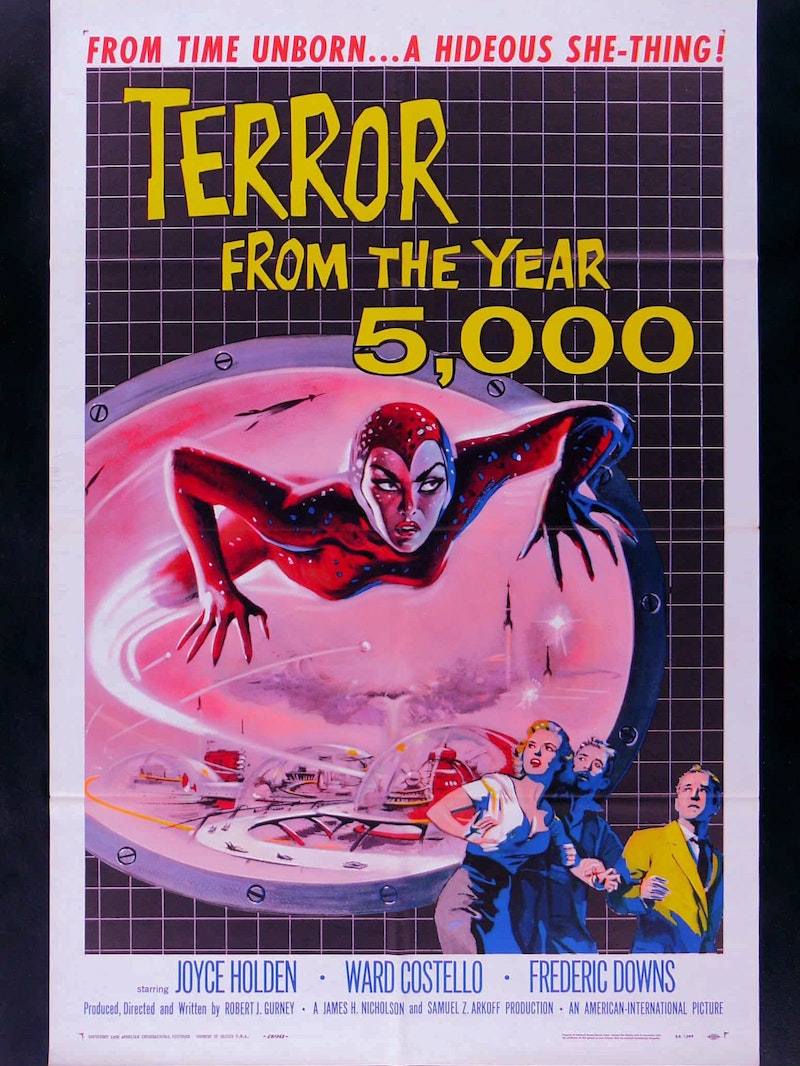 The future’s never controlled by any political party or special interest group, nor can the future be tailored to individual preferences. Once predictions of the future finally become reality, they’re part of the present and (eventually) the past in a process controlled only by foundational time barriers. Like a bottle of over-the-counter painkillers or a water faucet, impatient neurotics demand that the future be kept within close reach regardless of how impossible that is. The 1958 film Terror From The Year 5000 tells the story of two impatient neurotics whose attempts to manipulate the future create only chaos and horror.

The first third of Terror is a slow failure. The opening title sequence comes with noisy echoing narration and a spectacular montage of NASA footage. This is followed by 20-30 minutes where the filmmakers attempt to establish a dramatic subplot involving a love triangle between a scientist (Ward Costello as Dr. Robert Hedges), a research assistant (John Stratton as Victor), and a research benefactor’s daughter (Joyce Holden as Claire Erling; this character is also Victor’s fiancée). Luckily, this dull soap opera is quickly superseded by the story’s main arc.

While testing an experimental time machine Victor manages to transport a mysterious statue and a four-eyed deformed cat through space and time from 5000 years in the future. The cat’s fate is ominous; it dies while in transit, but this doesn’t stop Victor’s research. Eventually he brings back a living humanoid woman who’s simply referred to as The Future Woman. She’s a mutant survivor who’s lived through a worldwide nuclear holocaust. She views her random materialization on 20th-century Earth as a miracle, a second chance for her and other holocaust survivors to start over again in a place free from dystopia.

Salome Jens steals the show with her electrifying performance as The Future Woman (40 years later Jens would become an even bigger sci-fi legend for her work on syndicated TV hit Star Trek: Deep Space Nine). Jens’ character is one part hallucinogenic sex symbol (with a costume that looks like what would happen if a disco ball exploded onto a unitard), one part horrific chameleon monster hellbent on wiping the slate clean. She’s a tragic study of PTSD and the brutality of obsession.

When The Future Woman first comes in contact with Earth’s atmosphere the moment is marked by emotionally powerful special effects that can’t be summarized. The fact that these visual effects never appear more than once strengthens The Future Woman’s desperate alienation as she clashes with the world of primitive 20th-century humans. The people of 1958 can’t figure out how to give her the miracle she irrationally hopes for. She’s driven insane by post-apocalyptic frustrations that transform her into a homicidal maniac.

This isn’t the only character victimized by mental and emotional instability. Victor drowns himself in research after getting kicked out of the love triangle. His heartbreak turns Claire into a bitter enemy and it pushes him to ignore the advice of his scientific mentors. His sorrow becomes an afterthought as it’s replaced by an obsession with escaping disappointments of the present.

The Future Woman’s costume is the film’s most intense element of interpersonal drama. There are numerous scenes where light reflects off of the costume causing the mirrors to blast hundreds of light circles over anyone at close range. The light circles shake and quiver with every move The Future Woman makes. Images of other characters are shattered and these same images (in combination with a white hot glare) blind or hypnotize anyone directly confronting The Future Woman. Desperations of the future and the present rip each other to shreds as Terror From The Year 5000 presents poetic justice at it most distorted and dangerous.