The Final Rounds of Duke and McQ

McQ, one of John Wayne’s last films and the first time he played a cop, is an overlooked adrenalized riff on Bullitt that improves on the original. 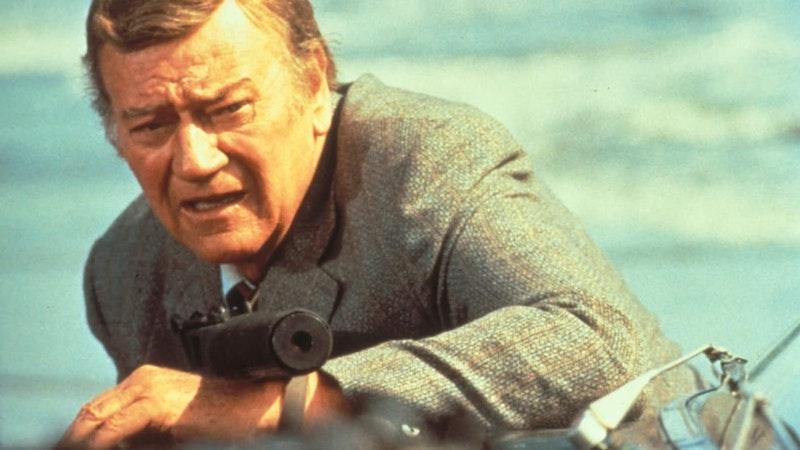 McQ, the first movie where John Wayne played a cop, came out in 1974. The second, Brannigan, came in 1975. By 1979, he was dead. He wasn’t fit to play an active duty detective anymore, and by all other standards, he was too old—but this is Duke. If you don’t buy it, he’s annoying. But if you do, Wayne is one of the best actors in the history of film. Even in his corpse-on-a-horse cycle of Westerns in the 1970s, Wayne is magnetic. Rooster Cogburn, another 1975 release and his penultimate performance on screen, would be a bore without Wayne. Besides Richard Jordan, one of the great character actors of 1970s American cinema, the movie is a slog directed by someone who doesn’t know what they’re doing—at least when it comes to Westerns and Wayne. Stuart Millar insisted on multiple takes. Wayne: “God damn it Stuart, there's only so many times we can say these awful lines before they stop making any sense at all.” John Ford was dead, but his habits stayed with his Duke.

John Sturges directed McQ, and he knows what he’s doing. Besides The Great Escape, Sturges made the best anti-blacklist movie, 1955’s Bad Day at Black Rock. Spencer Tracy and Wayne were a world away politically and personally, but Sturges has no trouble with either, eliciting some of the most interesting work of their careers. Maybe that has something to do with the fact that both of them are practically the walking dead in both films. Tracy had another 12 years left, but he still had to cut shooting days short for health reasons, and even more than the dozens of other alcoholic actors and filmmakers of the era, Tracy had pruned himself, and he looked a solid 20 years older than 55 in Sturges’ film.

In McQ, Wayne is 67 and looks it. He lives on a boat, retired and without a wife, just hanging out—until his best friend and former partner is shot in the back one morning. Shortly after hearing the news, a would-be assassin with a silencer starts blasting the man’s boat. The Duke hops out, runs to the boardwalk, aims at the assassin running away, and guns him down. Good: justice has been done. The reason McQ exists is because Wayne turned down the lead in 1971’s Dirty Harry and seriously regretted his decision; and apparently Bullitt was popular enough to warrant a rip-off (with better car chases) whose title also happens to be the first three letters in “McQueen.”

No matter: McQueen does nothing for me. Peter Yates is a good director when he has good material (The Friends of Eddie Coyle), but he can only go so far when he gets goofy (The Hot Rock, Year of the Comet). Bullitt is serious, but painfully so: like The French Connection, what was once electric and exciting is routine. The car chases in those two movies are no longer narcotic, unlike, for instance, the four-minute opening title sequence of The Good, the Bad, and the Ugly. Unlike car chases, filmmakers across the world still largely forfeit any creativity in designing their credit sequences. It baffles me, because those that did understand them and utilize them—Hitchcock, Godard, Fassbinder—aren’t obscure. You’d think others would’ve picked up where they left off. But no: more cars, quicker cuts.

One doesn’t watch McQ as a matter of course. A rip-off of Bullitt starring a guy with one lung playing a vigilante-ish cop who’s too slow to ever be badass. But he’s moving: this is the magic of Wayne’s acting. I’ve seen so many descriptions and complaints that Sturges’ film is “beyond slow” and “dreadfully paced,” which I don’t feel at all—because you’re spending time with Duke. And this isn’t him playing the hits, this is John Wayne going to an old fuck buddy’s apartment and turning down her offer of a few lines of cocaine. He tells the drug to “go snort itself” while she indulges, and again, in any other movie, this would be a throwaway. The messy woman the lead fucks or used to fuck that’ll end up dead, after one “big” scene, as a matter of course. Colleen Dewhurst does her best Elizabeth Taylor as Wayne looks on, blue eyes full of longing, loneliness, and lost love.

If you don’t like Wayne as an actor, none of this will work and you’ll likely find McQ “dreadfully paced.” But if you do like him, it’s enough to make you cry.

McQ features Clu Gulager as a crooked colleague, gorgeous Panavision camerawork by Harry Stradling Jr., the first use of the MAC10 submachine gun in popular American cinema, and a climactic car chase on a beach, with all of the above. McQueen is a wooden and dead-on-arrival actor for me, so this adrenalized riff on Bullitt with a patina of Dirty Harry tailored to Wayne’s limited physical abilities is more than a great action movie, it’s on the level with The Shootist as elegy to Wayne’s life and body of work. Unlike in Don Siegel’s 1976 film, Wayne’s character isn’t dying of cancer, nor is he in the West—again, McQ was somehow the first time that Wayne played a cop, and it went well, unlike the London-set Brannigan, where he caught pneumonia and nearly died.

McQ is wistful, shot mostly at night, dusk, and early morning, the sky always shades of dark blue, and in that shade, Wayne’s blue eyes shine bright as diamonds. They’ve seen a lot, they’ve seen too much, they’ve got it in them for one last go. The specifics hardly matter: this is a movie about Wayne saving the day, and he does, but when you’re watching McQ, you know that he—and Wayne—are nearly out of time.