Death Comes Faster Than You Think

Old is M. Night Shyamalan’s best movie since Unbreakable, and the first popular cinematic event of the pandemic. 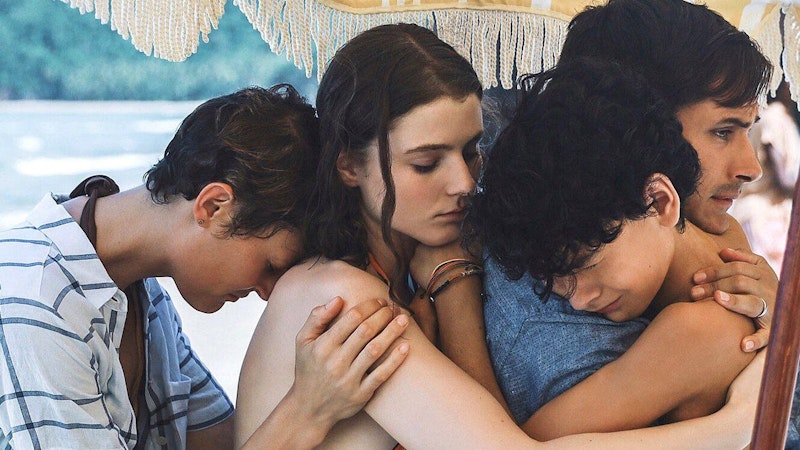 M. Night Shyamalan’s new movie comes with a recorded introduction from the man himself, thanking everyone in the audience for coming and experiencing this story together, and so on. These messages were becoming more common before the pandemic, but Shyamalan’s is short and ends with an earnest “Welcome back” that doesn’t feel corny, obnoxious, or false. Because movies are back now, thanks to Shyamalan: Old is the first new release since the end of 2019 that has seeped into popular culture and stayed there for longer than a day. Theaters have been open for a few months now, but this is the first event that’s registered, the first sign that popular cinema isn’t dead. Even Tenet, with such a precarious and ultimately unsuccessful theatrical release last summer, was talked about for longer than most direct-to-stream movies. Really, it’s only the television series (Mare of Easttown, The Queen’s Gambit) and documentaries (Tiger King, Framing Britney Spears, Woodstock 99: Peace Love and Rage) that enter the lexicon at all.

The movie theater is a territory, and the very act of going, along with everything else Shyamalan talks about in his introduction, will make you remember, make you talk, make you bring it up that day, that night, years later. I don’t have to argue this point any more, it’s been borne out for the last 16 months. Old is the first summer blockbuster of the coronavirus era, and even though it’ll end up making a third or fourth of what it would’ve made pre-pandemic, it’s still a multi-million dollar production with movie stars shot on 35mm in 2:39 widescreen and distributed by Universal. Popular cinema already survived a pandemic, two World Wars, television, the Internet, streaming video, and now it has reappeared in fine, familiar form with a film completely of our time.

Old has no explicit references to the pandemic, and despite its premise, there are hardly any echoes of our specific situation: no coughs uncovered or sneezes in the open, nor any characters that suffer respiratory distress. Nevertheless, you know what to expect with Shyamalan and a title like Old—like Alfred Hitchcock, another filmmaker taken for granted as merely a “popular entertainer” during his career, Shyamalan has a preference for evocative single-word titles. Concise premises, too: half a dozen people are at a resort and get stuck on a beach where they all get old really fast. Gael García Bernal and Vicky Krieps are husband and wife, and their kids eventually turn into Alex Wolff and Thomasin McKenzie on that damn beach that keeps making everyone old!

I don’t understand the complaints about “bad dialogue” here. You saw The Happening, right? How about The Visit? Shyamalan’s popular resurgence, and now a grudging critical reappraisal, has been one of the most heartening developments in recent popular American cinema. Everyone loves a comeback, but more than that, Shyamalan is proof that you can make movies anywhere, on your terms, and still get wide distribution. Besides his name being made fun of constantly—a xenophobic tic of the 2000s—Shyamalan is not someone who should be shafted and dropped without a second thought. He’s made bad movies, but few filmmakers haven’t. As Jayson Buford tweeted earlier this week, “Bottom line about M. Night is that his movies are distinct as fuck and if you are a filmmaker with a real voice, I respect you bro. So much art now has no feeling or real voice to it. Plotlines can be goofy for me if you doing something stuff with it.”

But Old isn’t goofy. This isn’t Glass—this is something everyone deals with. Over the course of one day, Krieps and Bernal go through cancer scares, blindness, and eventually Alzheimer’s before dying next to each other, blissful, unable to remember why they ever wanted to leave the beach. It’s some of the most profound and moving material in any of Shyamalan’s work, and this is easily his best movie since Signs. The kids played in the middle by Alex Wolff and Thomasin McKenzie do eventually escape and foil the evil scientists experimenting on people with as-yet incurable medical conditions and illnesses—by the way, this isn’t a “twist,” you know something fucked up is going on at that beach and that the resort is involved from the very beginning. People are only invoking the “twist” because of Shyamalan’s record, but compare the ending of Old to The Sixth Sense, Unbreakable, or The Village. There’s no shock when we find out the “old beach” is being used by someone.

This is good: dispense with any nonsense about expectations unfulfilled or echoes of Shyamalan’s past successes and failures. But back to their escape: as Splice Today contributor Ben Nash pointed out, the kids—at this point nearly 50 years old—stop to build a sandcastle before they swim through the protective coral. This takes years off of their lives, and they know it. They still build the sandcastle. I’m glad I didn’t see this movie alone, and thrilled that a movie of this scale could be filmed at the height of the coronavirus pandemic and still be a proper summer event—and, one that speaks to our time without being on the nose or hectoring. Time waits for no one, and Shyamalan has made his most cohesive and mature nightmare of time, aging, and death to date.