Jungle Cruise is fine for a movie based on a theme park ride. B 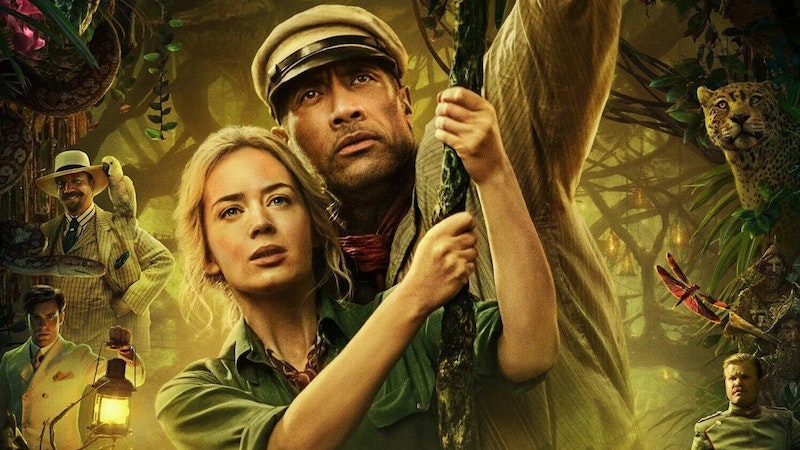 Jungle Cruise, at first glance, shouldn't be good. After all, it's based on a Disney theme park ride. Its plot is convoluted and nonsensical, built around on a series of meaningless interlocking MacGuffins. It's about a half-hour too long, and its director, Jaume Collet-Serra, is best known for making second-tier Liam Neeson action pictures. It steals nearly all of its ideas from older, better-known movies, from The African Queen to Aguirre, the Wrath of God  to The Mummy to The Lost City of Z.

However, Jungle Cruise is way more enjoyable than you’d think. It gets by mostly on the charisma of its stars, an impressive production design, and one of the year's best villain performances. Introduced by a strange remix of Metallica's "Nothing Else Matters" that's fused with James Newton Howard's score, the plot of Jungle Cruise entails a variety of factions seeking out a Fountain of Youth-like treasure.

Dwayne "The Rock" Johnson, who also produced, stars as Frank, the proprietor of the titular jungle cruise, which looks a lot like the Disney ride. He soon meets British naturalist Dr. Lily Houghton (Emily Blunt), who wants to use the tree treasure to cure all the world's diseases; she comes along with her brother McGregor (Jack Whitehall.)

Also in pursuit of the MacGuffin is Prince Joachim, a German aristocrat who's played by Jesse Plemons with a thick, over-the-top German accent that sounds a lot like Werner Herzog. Plemons delivers about 95 percent of the movie's laughs, and the Herzog homages continue with the other villain (Edgar Ramirez) whose name is "Aguirre." Also on board is Paul Giamatti, getting to do a rare Italian accent as a shipping magnate.

The main cast members have a natural charm and easy chemistry. And then there's the strange thing Jungle Cruise does with McGregor, the brother character.

Disney’s caught flak over the last few years for including gay characters in its movies, but including them at the bare minimum—like, say, a character without a name showing up for two minutes in Avengers: Endgame and mentioning a boyfriend in passing. Or the minor character in Cruella, who I guess was supposed to be gay because he looked a little bit like Malcolm McLaren. I still say Josh Gad's turn as LeFou, Gaston's lovestruck henchman in the Beauty and the Beast remake, was the best-executed example of this, mostly because it wasn't the slightest bit subtle.

Jungle Cruise establishes that McGregor, played by stand-up comedian Whitehall, is gay, and the first act of the movie treats him as a stereotypical punchline. Then, in a conversation with Johnson's character, he comes out, using euphemisms that wouldn't have been out of place in a scene from the Hays Production Code era. After that, the stereotypes stop and McGregor re-emerges as a reliable sidekick who's good at fighting, but not one who gets a love interest.

I didn't care for anything that happened with the plot involving the tree, and the threat hanging over the mortality of one particular character doesn't matter because, once again, death in movies is never permanent. I suspect that, like the other Disney ride-turned-movie Pirates of the Caribbean, there are going to be sequels, each worse than the one before.

But the presence of Johnson, Blunt, and Plemons are enough to overcome the project's numerous faults.