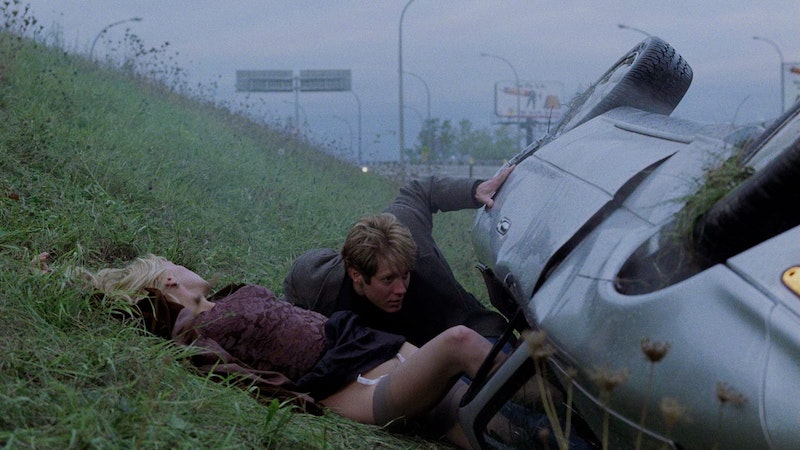 An attractive woman’s inside an airplane hangar. Small engine planes surround her. She’s aroused by the smoothness and the defined lines of the plane. She’s not alone. A nameless man dressed in a business suit begins to raise her skirt and they begin to engage in a game, presumably ending in sex.

In another scene, a man, film producer, is having sex with his camera assistant, in the back room, quickly and roughly before they resume work. An attractive woman and a film producer are married. They come home separately, telling each other detailed events of their infidelities. Following this, they’re even more aroused.

These are the opening scenes of David Cronenberg’s Crash (1996). Cronenberg is known for films that explore sexual deviancy, violence, and dystopian visions of society and Crash fits that category. The film is based on J.G. Ballard‘s 1973 eponymous novel. It features people who have symphorophilia—a paraphilia in which people are sexually aroused from car accidents and disasters, whether real or staged.

The film involves James Ballard (James Spader) and his wife Catherine (Deborah Kara Unger)—a married couple who have an “open marriage” and get sexually aroused from their infidelities; Vaughn (Elias Koteas) who stages famous car crashes, and Dr. Helen Remington (Holly Hunter), who also has an obsession with car crashes. The lives of these four people get intertwined to the point of destruction. A peripheral character of Gabrielle (Rosanna Arquette) makes an appearance as well, and serves as the physical link between human body and the machine.

Ballard is driving and has an accident. He survives, as does a wife of a passenger who doesn’t survive the crash. The wife is Dr. Helen Remington, who exposes her breast in the crash while trying to get out of a seat belt. Ballard sees this and is aroused. As the film unfolds, Ballard and his wife, as well as Remington and Vaughn end up engaged in staged car crashes, having sex in cars, and ultimately involved in a final car accident that ends deadly for some.

Cronenberg attempts to look at man’s obsession with the machine and the ways he merges with it. The characters have sex in cars, some of them live in cars, and they caress the car parts. Whatever their superficial differences, all characters are existentially empty and want to be filled. All want to become a part of the car, and in this act, they accept the loss of humanity.

For Cronenberg, sexuality is constructed around the machine. Contraptions lead to sexual arousal. One example is Gabrielle, who has to rely on steel braces to walk because she was badly hurt in an accident. Every movement of her body is restricted and controlled by steel braces, and with every movement, she reveals she has no free will but that the braces are in charge of both body and mind.

The accident also gave Gabrielle a long scar on the back of her leg, which resembles female genitalia. This further adds to Cronenberg’s juxtaposition of sex and the machine. Gabrielle’s essence is beautifully grotesque, and Cronenberg’s vision of physical slowness is reminiscent of David Lynch’s forays into the unknown.

As the film progresses, Ballard isn’t sure why he’s engaging in such deviant behavior, and he doesn’t know why the obsession is so satisfying. This is as close as we get to the questions of what motivates his behavior. It’s obvious that Ballard and others are experiencing some type of sexual liberation but one that’s only momentary. The insatiable appetite, and the death drive, is the perverse authenticity of Ballard, as well as others. Because the perversion unites this not so merry band of symphorophiliacs, there’s no metaphysical distinction between the characters, except whatever essence an individual actor has brought into the film.

At its core, sex is life energy but here it’s used fetishistically. As a result, this same life energy is completely drained. We’re left with barely alive, barely human, people, whose lives are meaningless, vapid, devoid of imagination. The more engagement with the fetish Ballard experiences, the less human he feels, and Spader’s repeated vacant stares prove this. The car as an immovable artifact somehow retains its soul, while the humans are losing theirs, if they even had it.

Cronenberg doesn’t explore this enough. J.G. Ballard intended the book to be a warning against such society, as well as people’s obsession with a creation of perfect existential enclave. The line between individual utopia and dystopia is thin in this case, but Cronenberg doesn’t take this route of curiosity. Instead, he indulges in the perversion that’s before us. As much as the director doesn’t need to impart his morality or judgment onto his creation, he also doesn’t necessarily need to elevate a perversion to the level of beauty or normality.

The essence of a sexual fetish is the depletion of sexual/creative energy, and thus eros too is rejected. But all of this is not part of Cronenberg’s intent. I don’t fault a director for his particular intentions, however the choices that were made elicit indifference. Much like the array of characters who lack passion and are ambiguous and transient about everything, the viewer too is left with a hollow feeling. The images evoke listlessness and depletion of embodied life energy. It’s a society in which machines reign over the human, in which technology turns people into depraved and depressed zombies. Cronenberg doesn’t seem to mind.