I Love You So Much, I Could Shit 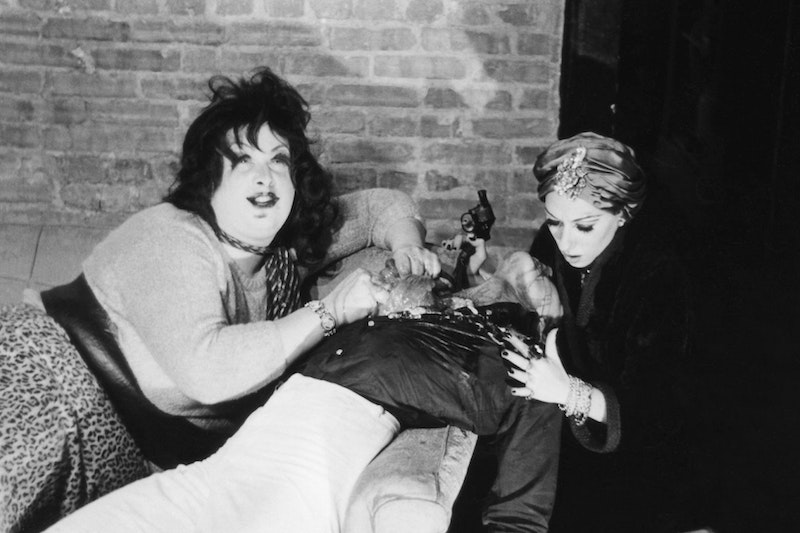 John Waters was 24 when he made Multiple Maniacs. His second feature, and first with synchronized sound, the 1970 film featured a cast of Waters’ friends from his hometown of Baltimore, led by Divine. Made for an estimated budget of $5000, Waters shot the movie partly in his apartment and partly guerilla-style in nearby locations. It didn’t draw much attention at the time, beyond a negative review in the Baltimore Sun that described it as “very smelly.”

Still, Waters toured the film around independent exhibition venues in the United States, took it to England, and over time the movie has become a cult classic. The Criterion Collection produced a restoration in 2016, and recently included it in its “Close to Home” selection of films on the Criterion Channel. The “Close to Home” movies were all shot where their directors lived, so Multiple Maniacs definitely qualifies there; but it doesn’t quite fit in with the rest of the selections.

It’s hard to think of many movies outside of Waters’ own work where it would fit in. It opens with the Cavalcade of Perversion, a nomadic carnival led by Lady Divine (played by Divine), which promises curious suburbanites a freakshow of fetishes: a woman kissing a bicycle seat, a man burning another man with a cigarette, a puke eater. “We got it all and we show it all,” boasts Lady Divine’s lover, the barker and ringmaster Mr. David (David Lochary).

But David worries about the end of the performances, when Lady Divine robs the spectators at gunpoint and murders them. He thinks she’s getting more psychotic, and he’s started seeing someone on the side, Bonnie (Mary Vivian Pearce). Lady Divine’s tipped off that he’s cheating on her, but when she goes to confront David she’s raped—and then encounters a strange woman (Mink Stole) who gives her a rewarding sexual experience involving rosary beads.

Things get stranger. There are various murders. After raped by a previously-unmentioned giant lobster Lady Divine goes on a kaiju-like rampage through Baltimore. Finally the National Guard shoot her as “America the Beautiful” plays.

Waters is famous for bad taste, and there’s a lot of that here, but it’s bad taste that’s aware of what good taste is. The kinks and marginalized people he presents aren’t mocked for their weirdness, at least for the most part. Instead they become the basis for a mockery of everyday life and morality. There’s a lot of blasphemy, not only against Christianity, but against the civic religion of America—against cops and the military and all of society.

The title of the movie’s a reference to Herschell Gordon Lewis’ exploitation film Two Thousand Maniacs!: “every one of my movies is a satire of a certain genre,” Waters has said. “And this was the gore movie.” Multiple Maniacs feels like exactly this, a satire of an exploitation film, trash piled on trash, weird sex on top of unpredictable violence.

It’s also fundamentally unreal. The amateurishness and low-budget production values alienate the viewer from the story. Waters knows what he’s doing with that, inviting the audience to laugh at the story as a permission to let themselves be engaged with it. The detachment that permeates the film makes it bearable.

It’s a weird stumbling mix, unpredictable but inconsistent. Some stuff, like Divine’s sex scene in a church, drag on too long and become dull. But then sooner or later something comes along to grab you again—in the church scene, a random and unexpected image of a guy shooting up heroin.

And Divine’s first among them. He (the character’s female, the performer’s male) above all has an energy that drives the film. He plays to Lady Divine’s monstrousness. Lady Divine’s internal monologue tells us that she’s become a maniac by the end of the film; but as with all the most resonant monsters, her mania’s far more interesting than that of the maniacs who seek to destroy the monster.

What does it mean that Waters made this movie in his home? There’s something confining about the internal space, which are visually duller locations than the grimy Baltimore streets. Confrontations happen in the home, and sex happens there, but so do betrayals. There are a few tender moments—as when Lady Divine becomes a fangirl in the presence of her daughter’s new boyfriend, a member of the Weather Underground. But by and large the home is a place of confinements and secrets and emotional brutality.

Brutality happens out on the streets, too, but it’s more straightforward. People are more themselves. Everybody in the home has secrets. Outside the home there may be a cavalcade of perversions, but that’s just people making a living by being themselves. Which perhaps is the point of the film. Waters and his maniacs made a movie that works because it feels somehow personal. It’s unreal, but it’s true. It’s got sex and drugs and violence, but they’re not just cheap thrills—which is to say, they are cheap thrills, but more besides. They’re not conventional Hollywood selling points. They’re made weird, turned into elements of freakishness. The movie’s proudly on the side of freaks and maniacs and monsters, and it works because it doesn’t dilute their monstrousness.