Choose Your Own Adventure

Never Rarely Sometimes Always is another great Eliza Hittman film, with a stunning debut performance by Sidney Flanigan. A- 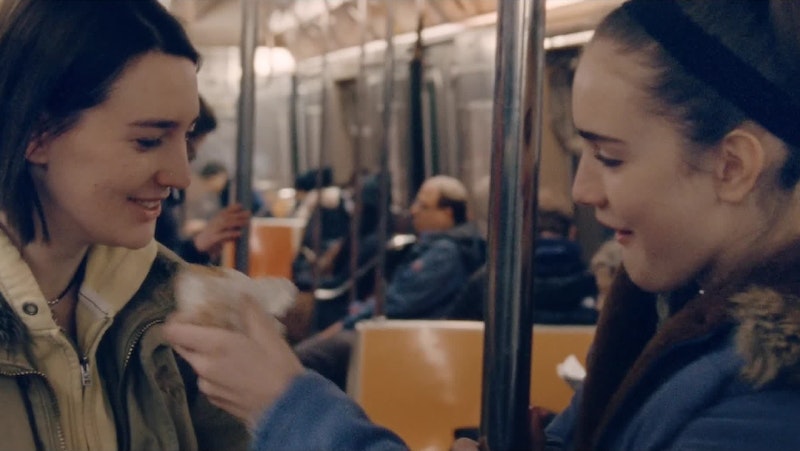 Never Rarely Sometimes Always is the third film by Eliza Hittman I’ve seen, and certainly the best. 2013’s It Felt Like Love and 2017’s Beach Rats were exemplary examinations of love and lust under circumstances that damn or destroy the individual. These are also films where the infrastructure of New York City and the tri-state area is very important: subways, buses, and trains means a dangerous decision has been made. In It Felt Like Love, a young girl’s preyed upon by an older man who doesn’t care about her; in Beach Rats, a young man having difficulty expressing his sexuality pursues anonymous gay sex on the Internet, and makes the trip to meet up in the bushes somewhere. In Never Rarely Sometimes Always, Hittman’s protagonist begins in Allentown, Pennsylvania.

Sidney Flanigan plays Autumn Callahan, a 17-year-old girl with an asshole stepdad, a good mom, and one good friend. We don't see much of the former two. The movie begins with her singing and playing guitar at a talent show (Flanigan can actually play, too), and afterwards, we see her peer group. Her stepdad is a grown-up version of these idiots, and his dismissive comments and insults hang over every male encounter in the film.

One of the jugheads taunts her at a pizza place. They’ve slept together, it’s clear, but Hittman never explicitly says this or shows anything—why would she? We know who’s responsible when Autumn discovers she’s pregnant. We do not need a back story here. Skylar (Talia Ryder), her cousin, doesn’t need to be convinced to steal money so they can buy bus tickets to Manhattan so Autumn can get an abortion. They never even talk about it. It is understood, and their precarious mission—beg, borrow, and steal to take a clandestine trip to get an abortion in another state—is shown and carried out without any long discussions at all.

Hittman fills her films with these moments, snatches of life remembered that are far more realistic than any dramatic blowout fight or conversation outside the pizza place. Her characters are made outlaws and runaways by a society that misunderstands, mistrusts, and destroys the human body. They’re always sneaking away from friends and family to take care of some discreet urge or necessity, whether it’s love, connection or urgent medical attention. Never Rarely Sometimes Always is her prettiest film (Hélène Louvart’s 16mm cinematography is exceptional), and it contains her best performance: Sidney Flanigan is enormously compelling as Autumn Callahan, and almost all with her face, in every scene.

This is a complex character rendered so fully with so little dialogue, exposition, or “big” scenes. I don’t think this is an after school special or a so-called “important” film, and while I despise most of those films as cynical, lazy exercises in milking a fast-deflating trauma industry, there’s value in the social message movie. Most of them are terrible, but to tag and admonish or avoid altogether a film simply because it follows a programmatic approach to a sociopolitical topic like abortion is ridiculous. As a response and corrective to 4 Weeks, 3 Months, 2 Days, I understand the criticism: Cristian Mungiu’s 2007 film is more like an abortion thriller, whose core scene involves a manipulative and eventually violent male abortionist.

The analogous scene in Hittman’s film—and the emotional center of the movie—is a long take of Autumn describing her medical and sexual history to a sympathetic nurse. Again, this movie is subtle and relies on suggestion and that is what makes it work. Flanigan cycles through so many emotions without saying more than a dozen words, and it’s here where we learn the most about her and her past. It’s compromised and all too common and familiar.

Joseph Kugelmass wrote about Never Rarely Sometimes Always for Splice Today on Monday, in a typically ponderous and amateur piece of writing that would make more sense as a submission from one of his particularly dull students than anything anyone should be getting paid for. Kugelmass is a dilettante: “The difference between the reality of this movie and the way it’s been valorized since its release reveals a lot about what movie critics think indie dramas ought to do and be. They ought to tackle a thorny, political issue. They ought to be about young people. They ought to ‘reveal’ supposedly hidden truths about the lives of ‘ordinary’ Americans.”

(I wonder if he remembers chiding me for “not watching Magnolia the way PTA wants you to.”)

Kugelmass says that Never Rarely Sometimes Always is “a dull, preachy, predictable exercise in linear plotting, peopled with stereotypical characters who aren’t worth our time.” Dull? Well, I guess it isn’t an abortion thriller. Preachy? Not at all—like I said, Hittman understands the power of images and gestures and uses the medium to tell her story. There are no speeches or “very important moments” in this film, it’s thoroughly realistic—so yes, it’s predictable, but what wouldn’t be predictable? The girls get kidnapped along the way? Autumn dies of a botched abortion? Skylar abandons her friend briefly only to reunite at the very end? What does he want, Die Hard: With a Speculum?

Autumn and Skylar are not stereotypical. What’s most striking about Never Rarely Sometimes Always are Flanigan and Ryder’s performances and the way they’re characterized. These young women are not cardboard cutouts or likable stereotypes. They’re moody, difficult, inarticulate teenagers. Unlike most social realism and the sorts of “very important films” that are awful and do clog the culture, Autumn and Skylar don’t have an invisible moral piggy bank. Autumn never thanks her friend for helping her get to New York, she never says thank you for any of the things Skylar did for her. This is noticeable, realistic, and completely uncharacteristic of a movie protagonist.

I don’t think it’s clear that Hittman’s characters are going to stick together through the ordeal, in fact for a while it appears as though Skylar is ready to abandon her friend for some cool guy with a band playing downtown. But she uses him to get some cash so they can get home. And earlier too, we watch Autumn and Skylar at their grocery store job hand in their cash bags at the end of a shift, and their ultra-creepy manager kissing their hands as they turn in their till. When Skylar lies about getting time off to take Autumn home, the same manager complains, “I’ll be lonely if you leave.”

These two moments—along with Autumn getting stared down on the subway by a deranged businessman jerking off—are the only times Never Rarely Sometimes Always becomes sensationalistic. Of course these situations are common, and that’s the greatest indictment of all: in a fictional film, it’s hard to believe a manager of a grocery store in suburban Pennsylvania could get away with kissing the hands of teenage girls working for him, but as I type those words, it’s like I’m reporting from Scranton or Allentown. And anyone that’s spent time on the New York City subway knows that a businessman having an in-the-zipper quickie while staring down some poor innocent victim is all too common.

I hate watching new movies at home. I can’t wait to see movies in theaters again, and I hope that Never Rarely Sometimes Always gets the recognition it deserves and that its stunning lead performance by Flanigan isn’t forgotten when the plaudits and the nominations are due. This is the best movie of 2020 so far and it’s not even close.