A Bracing Lack of Apologia

The Day After is an excellent introduction to director Hong Sang-soo. 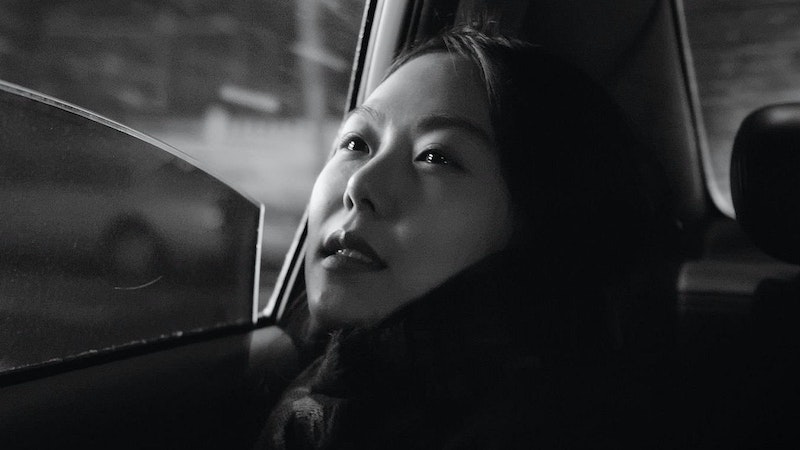 If you’re unfamiliar with the films of South Korean director Hong Sang-soo, The Day After is an excellent introduction. He’s often been compared to Woody Allen, for his prolific output (this was one of three movies of his which premiered last year), use of protagonists who seem like himself, low-key sense of ironic humor, apparently simple style, and focus on romantic travails. But while Allen long ago drove himself into a rut of self-deprecation that is in fact self-flattery (Orson Welles called it arrogance disguised as timidity), Hong depicts interpersonal embarrassments with a bracing lack of apologia.

Hong’s movies are very similar to one another, not just in terms of plot but also style and tone. He maintains a formal steadiness—unhurried editing, still or smoothly panning cinematography, unshowy use of digital cameras, soundtracks that are usually silent but will gently transition in classical music. The Day After feels further unvarnished, shown in black and white. He knows exactly how to work around conversations, holding the camera where the audience can observe one character’s unconscious mannerisms while another reacts to them, or zeroing in on a single subject when they’re about to say the most important thing (but without announcing that importance). The simplicity is deceptive, the sort of filmmaking it’s easy to take for granted but which provides ample fodder for enthusiasts to scrutinize.

Which isn’t to say the movie is only of interest to academics or dedicated cinephiles. Hong is a popular artist in Korea for consistently delivering funny, humane films that make for a lovely evening out. The Day After is a comedy of continued misunderstandings, emotional turnarounds, and lies crashing into further lies. It follows Ah-reum (Kim Min-hee), who on her first day working at a small publishing company is attacked by the wife of her new boss, Bong-wan (Kwon Hae-hyo), who’s under the impression he’s cheating on her. He is, though not with Ah-reum, but rather his previous assistant, Chang-sook (Kim Sae-byeok). But that’s over—or not. The day quickly turns hectic as Bong-wan sees a chance to continue the affair by deflecting all blame onto Ah-reum so that he can hire Chang-sook back with his wife being none the wiser.

The film masterfully captures the feeling of stumbling into the middle of people’s personal drama and desperately wanting to mind your own business even as they insist on reeling you in. Kim Min-hee is the bemused calm eye of this emotional hurricane, torn between her desire to just do her job and that weird feeling you can get of obligation to someone else when you’ve (maybe unwisely) allowed them to open up to you. Kwon is the embodiment of middle-aged male dissatisfaction that thinks one can be sustained on temporary gratification while ignoring their spiritual emptiness. The film extends him empathy while also casting a pitiless eye on the pain he causes others.

In another Allen similarity, the subtext of his real-life upheavals often creep into Hong’s scripts, especially more recent ones. He and Kim Min-hee, his collaborator on multiple films (including all three that premiered last year), had an affair that caused a tabloid sensation in Korea, and they’ve continued to work together since. One can read as much or as little of that information into The Day After as they choose. (Though this is not even the most subtext-heavy of his recent movies regarding that incident. In On the Beach at Night Alone, also from last year, he cast Kim as an actress working through her feelings after her affair with her director on a film comes to light.)

Regardless of their interpretation of his work through this lens, a viewer never gets the sense that Hong’s fictional analogues are used to justify his own actions, or that his work exists as narcissistic therapizing. Your mileage may vary, but I maintain his films work equally well whether you’re aware of their behind-the-scenes context or not. You can still appreciate the singular atmosphere The Day After generates—twisty without being madcap, relaxed without being enervating, kind to its characters and cruel to their foibles. It’s an opportunity to settle into his world.