A review of Queen of Earth, from writer/director Alex Ross Perry. 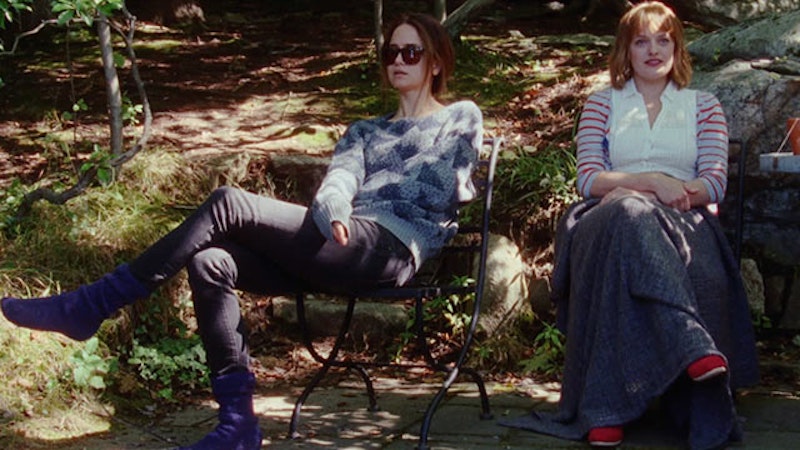 Whenever men are beefing in movie or on a television series—whether pals, pals-on-the-rocks, pals-to-be, or outright enemies—someone along the audience fringe is bound to let loose with the crack. The wording and degree of withering condensation varies, but you can almost set your watch by this remark, which verges on the cliché; it’s as inevitable as death or IRS audit. To wit: “Why don’t you dudes just get a room already, and fuck?” With the (*possible) exception of last year’s perplexing Clouds of Silas Maria, Queen of Earth is the first movie I’ve watched that flips this crack’s gender setting in the polar opposite direction.

Down a boyfriend (who split) and a dad (who died), Catherine (Elizabeth Moss) escapes to the lakeside house that Ginny (Katherine Waterson), Catherine’s bestie, calls home. Catherine is innately expressive, with wide, swallowing eyes and a smile that reveals more than it needs to, while Ginny is drawn, taut, and pinched. Both women are roundly barbed and unpleasant—no surprise there as this is an Alex Ross Perry joint—to one another when they’re others’ company generally, though for the bulk of Queen of Earth a brooding, mutual loathing reigns when they’re alone together. The tension this movie gives off could curdle a gallon of milk in 10 seconds flat; yes, it’s that scathing and unbearable, running wild within the airbrushed contours of a locale that’s supposed to be tranquil and peaceful. Violence lurks so insistently in every gesture and mixed message that in lieu of full-on confrontation, it’s impossible not to want these two to hit the sheets, even via implication.

Queen is a study of encroaching mania. That Catherine is losing it is clear; she eats badly, barely dresses, doesn’t shower, erects a silent, psychic wall around herself, drifts away from her job as overseer of her late artiste dad’s affairs.

Ginny—unemployed, boring, dating a neighbor who’s kind a dick—plays the cautious, concerned friend with a diligence that scans, at first pass, as obsessiveness.

The line between “drama” and “thriller” is almost non-existent here, and as you drift deeper into the weirdness, you may have some hard questions to ask yourselves. How well do you know your best friends? How connected are you, really, to those friends? How much imposition is finally too much, and what is the point where you lose your shit and throw your broken best friend out of your home?

Queen doesn’t offer a clear answer to those questions or any others you may come up with; the non-leads register as vague rogue cyphers who may or may not be real, or whose brusqueness might be argued away by Catherine’s own inner turmoil. Moss submits to the role and owns the picture with a possessed single-mindedness so feral that you truly come to fear her as a viewer. Spoiler: she never actually claws at or displaced dirt, as I secretly hoped she would. But there’s a devilish late-night scene when she has insomnia and finds a random partier passed out by the lake outside the house. She takes him inside, gives him some water, and engages him in small talk which, characteristically, she uses as a rhetorical cudgel. Then—right before the scene cuts out—she gazes at him with a sad, girlish smile, and says, “You know, I could kill you right now, and no one would ever know.” You’ll believe her.