The Victory of Inspector Clouseau 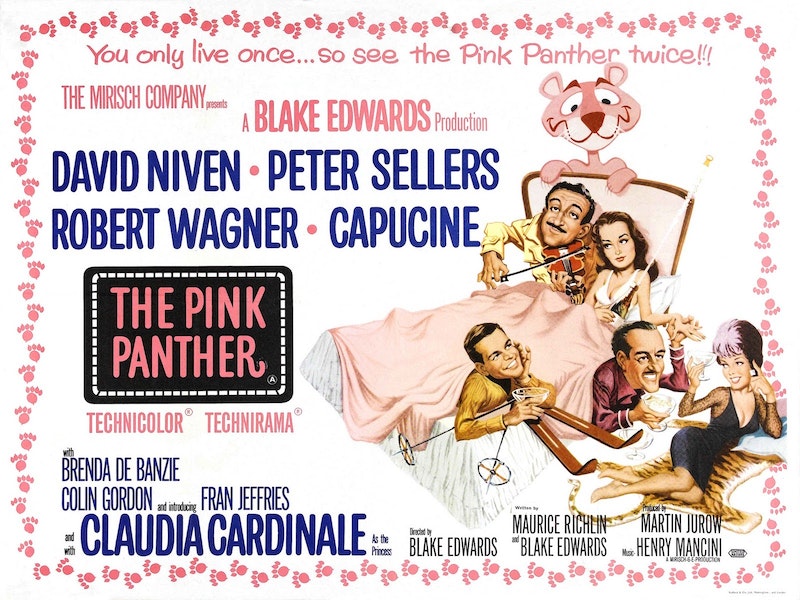 This is part of a series of posts on 1960s comedies. The previous post on The Producers is here.

The mischievous cartoon Pink Panther from the credits of the Inspector Clouseau films became so iconic that it's easy to forget that originally the Pink Panther was not an oddly-colored feline at all. The title of the 1963 Pink Panther referred to a diamond. More specifically, in the film, the "Pink Panther" refers to a pink panther shaped flaw at the heart of the largest diamond on earth.

The flaw is a more or less intentional metaphor for the movie itself. The film is in many respects an uninspired heist drama. Sir Charles Lytton (David Niven) is an upper-class, elegant thief known as the Phantom. He plots to steal the Pink Panther diamond from Princess Dala (Claudia Cardinale), the ruler of an unnamed South Asian country. Lytton is a lover of Simone Clouseau (Capucine) the wife of Jacques Clouseau (Peter Sellers), the inspector who’s trying to capture the Phantom. George Lytton (Robert Wagner), Charles' wastrel nephew shows up too; he tries to seduce Capucine without knowing she's in cahoots with his uncle, while the uncle tries to seduce Dala to get at her diamond.

If that sounds familiar, it's only because it's familiar enough to be downright irritating. A scene in which Charles gets Dala drunk is particularly interminable, involving lots of cutesy flirting on a tiger skin rug. Perhaps this was stimulating to viewers in the 1960s, but it comes off today as hopelessly dated and almost repulsively unsexy. Every stiff kiss seems like a desperate call to end human mating rituals once and for all.

Luckily, the boring heist picture has a flaw in it—that flaw is Peter Sellers. In his first scene, the intrepid inspector sets a giant globe in his office spinning, absent-mindedly leans on it, and then falls on his face. From there he, staggers and bumbles his way through the feature, tripping over flower pots, watching door handles come off in his hand, spilling milk, and playing his violin badly.

Sellers' physical comedy is brilliant when it's treated as a sudden bumbling distraction from the storyline—as when he visits Charles and George in prison and inadvertently sticks his hands in their abandoned bowls of porridge. But the highlights of the film are when that pink panther flaw wakes up, stretches, and spreads itself across the entire diamond. A farce scene in which Charles, George, and the Inspector all make their way to Simone's bedroom to try to seduce her is a masterpiece of silliness. Simone scrambles to keep the men unaware of each other's existence by stowing them under the bed and in the bubble bath, while they each make a break for various doors and windows only to be stymied by inopportune bellhops and maids, or by Clouseau falling over himself and everyone else.

Even better is the inevitable heist car chase scene, which is a gloriously ridiculous refutation of heist car chases. Rather than an exciting race through narrow streets with daring escapes and hairpin turns, the entire sequence is set in a single intersection, with an elderly man trying to cross the street as the same few cars whoosh back and forth in front of him. Finally all the cars collide in a pile-up that isn't even screened. You just hear the tearing metal while gazing into the old man's impassive face. Rarely has a climax been so anti.

As the A.V. Club says, the contrast between Sellers and the would-be serious script is what makes The Pink Panther a delight. "If not for Sellers' hilarious pratfalls, The Pink Panther could be mistaken for a luxuriant caper movie… which is precisely what makes the movie so funny. It acts as the straight man, while Sellers gets to play mischief-maker." Sellers doesn't just play mischief-maker, though; his presence is a crack into which the film haplessly disappears. Suave is swallowed up by silliness, as the daring Phantom ends up performing his robbery in a gorilla suit.

The Pink Panther ends up being a slyly klutzy comment on comedy. Humor’s all about imperfections. Clouseau is so funny because he's so incompetent that he turns spreading a blanket into a battle for dominance (which he loses.) The Phantom is smooth and daring—as perfect and brilliant as a diamond. Clouseau is the opposite of all that.

Yet, the twist at the end, in which Charles frames Clouseau, is effectively an admission that nobody cares about Charles, and Clouseau has stolen the crown out from under him. The final joke is that the crazed hordes of women mobbing the man they think is a daring jewel thief are in fact mobbing the real star of the film. The supposed protagonist, who we're supposed to value, isn't worth that much. It's the flaw that's the real diamond.