Monos is a harrowing, very beautifully mounted treatment of a tough subject. A- 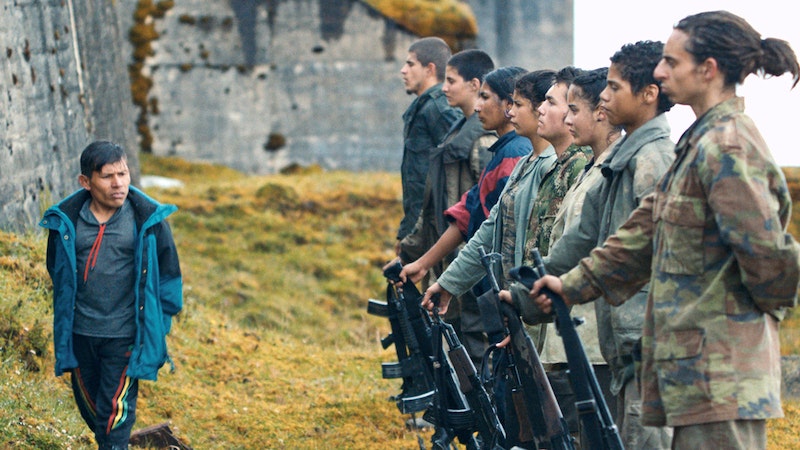 If you've ever wondered what William Golding's Lord of the Flies would look like in South America with machine guns, you'll get your answer in Monos, the new Colombian film from director Alejandro Landes. It's a disturbing film, but also a great one, especially visually and sonically. I expect it to end up in the Oscar competition for this year’s Best International Feature Film (formerly Best Foreign Language Film.)

Landes, the Brazilian-born director and former journalist whose nationality is listed as Colombian-Ecuadorian, previously made the 2011 film Porfirio. Monos premiered at Sundance this year, where it won the World Cinema Dramatic Special Jury Award.

Monos, which arrives in theaters this month, is set in an unnamed, Colombia-like South American country. A group of young teenagers are gathered in a remote mountain hideout, trained as child soldiers, while also holding an American engineer they call "Doctora" (Julianne Nicholson) captive. It's not clear where they are or which war they're a part of. We only know that they're serving an entity known as "The Organization."

The characters are completely without adult supervision, with the exception of a handler who visits them periodically. The handler happens to be a very muscular little person known as "The Messenger" (Wilson Salazar), and he gives them custody of a car named Shakira with strict orders to keep it alive. Knowing the nature of teenagers, you can guess how well that goes.

The characters have names like Wolf, Bigfoot, Smurf, Boom Boom, Dog and Rambo. There may be more sophisticated and deadly weaponry available, but the conclusion is much the same as Lord of the Flies: You take children away from parents, and society, and leave them to their own devices, and they're going to tear each other apart. There is much sex and violence, and there are also echoes of Apocalypse Now, especially when the setting moves to the jungle.

The most notable character is Bigfoot, who's played by Moises Arias, the former Disney Channel actor who performed so memorably as Biaggio in the outstanding 2013 indie film Kings of Summer. This is a dramatically different part from the sort of young goofballs Arias played in that film and on the old Hannah Montana TV show, but the young actor absolutely steps up.

The film boasts gorgeous cinematography, from Jasper Wolf, making use of locations as differing as mountains, jungles, and water rapids (the film was shot in Columbia's Chingaza National Park.) There's also a first-rate score by Mica Levi, who was Oscar-nominated for Jackie and probably deserves to be again for Monos.

Landes' film would make a natural double feature with Luce, the Sundance film from earlier this fall about a boy who goes from African child soldier to high-achieving high schooler.

Monos has been the subject of controversy in its home country, with some believing it has opened old wounds related to Colombia's long history of military conflict, which was the subject of a not-exactly-definitive peace agreement a few years ago. But there's no question that Monos is a harrowing, very beautifully mounted treatment of a tough subject.