Where's My Roy Cohn? and Jim Allison: Breakthrough show that compelling docs can be made about both the best and worst of men. 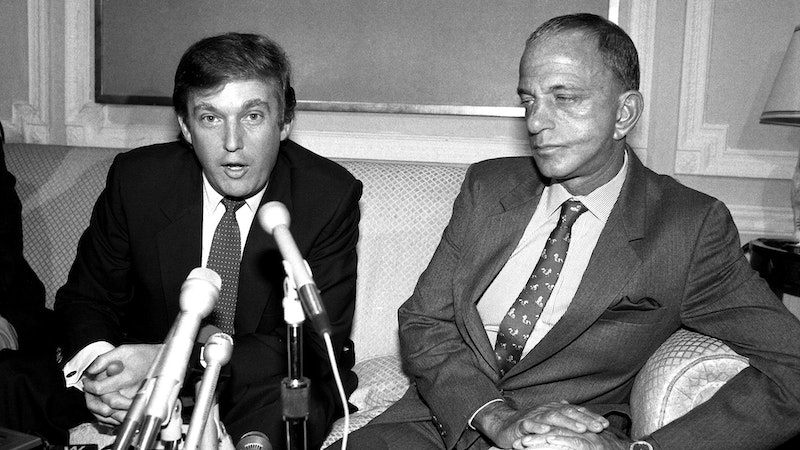 The new documentary Where's My Roy Cohn? tries to do two big things, and it does both of them well. The first is to provide a comprehensive history of Cohn's life and career, and the second is to tie Cohn's story to Donald Trump.

Cohn's story is familiar. Gay and Jewish, although not particularly fond of gays or Jews, Cohn was Joseph McCarthy's right-hand man during the 1950s red scare and played a part in the trial of Julius and Ethel Rosenberg. Cohn became a powerful New York lawyer, power broker, man-about-town and all-around real-life supervillain, willing to cut ethical corners and lie. Cohn succumbed to an AIDS-related illness in 1986, at age 59, not long after he was disbarred by the state of New York.

The documentary, directed by Matt Tyrnauer, opens wide this week. It makes excellent use of decades of archival footage, along with several talking head interviews, which include Anne Roiphe (who is Cohn's cousin!), one ex-boyfriend of Coen's, and 1950s expert Thomas Doherty. Also interviewed is Roger Stone, another Cohn protege whose entire career in public life could best be described as a pale imitation of Cohn's.

On the Trump side, it's become a cliché in the last four years to lazily tie any evil figure in history or in fiction to our current president. But Cohn is better fit than most. Cohn was Trump's lawyer, friend, and mentor, and there are obvious parallels between the ways the two men behaved publicly, dealt with the media, and moved in New York and Washington social circles.

The film gets its title from what Trump supposedly said when he was dissatisfied with Jeff Sessions. Cohn's behavior in TV interviews was remarkably similar to what Trump would do decades later—and like Cohn, Trump would always get invited back anyway. Tyrnauer's film, to its credit, never gets smug. It doesn't end with a URL or a call to action and avoids some of the other negative tendencies of left-leaning documentaries.

Cohn's story has been told in fiction before, most notably in Tony Kushner's play Angels in America and its HBO adaptation, in which Al Pacino played a late-in-life version of Cohn. There was also a 1992 TV movie called Citizen Cohn, in which James Wood was Cohn. And there's going to be another Cohn doc later this year—Bully Coward Victim, which was directed by Ivy Meeropol, the Rosenbergs' granddaughter. Where's My Roy Cohn? doesn't break much new ground or delve into many areas that will be new for those familiar with Cohn's life story. But the film is unmistakably an expertly assembled work. A-

There's another documentary out this week about a man who has done much better for humanity than Roy Cohn ever did. Breakthrough: Jim Allison tells the story of the scientist who bucked the medical establishment to create a promising treatment for cancer. Allison's quest, which led to a Nobel Prize in 2018, would’ve made a worthy documentary on its own. But director Bill Haney has something more: a subject who's a fascinating, compelling character in his own right.

A harmonica-playing Texan who’s buddies with Willie Nelson, Allison is shown as a notable fish-out-of-water in places like New York and San Francisco, where work has taken him over the years. The film also depicts his tragic backstory: Allison is driven to fight cancer after several members of his immediate family were afflicted with the disease, and he fought it as well. Allison helped pioneer a form of immunotherapy that has achieved nearly miraculous results in some patients. But we see Allison, over many years, battling with a medical and pharmaceutical establishment that was skeptical that his planned therapies could work.

When I heard what the film was about, I had a few concerns. Since "I'm bucking the medical establishment" is what's stated by every pseudoscientist on earth, I was afraid the film was elevating a quack. I was also worried that the filmmakers were following the news media's lead, in which scientifically illiterate journalists take oft-dubious claims of "medical breakthroughs" at face value. Breakthrough doesn't do any of that. Allison’s the real deal, and his work has significant impact, as we see in the stories of his patients. But the film is also abundantly clear that Allison has not developed "the cure for cancer." His research has shown amazing results in some patients, but not all, and not for all forms of cancer. B+

It's silly to judge the quality of documentaries by how good a guy the subject is. Where's My Roy Cohn? and Jim Allison: Breakthrough show that compelling docs can be made about both the best and worst of men.