Eye in the Sky is a remarkable morality play about the ethics of drone strikes. 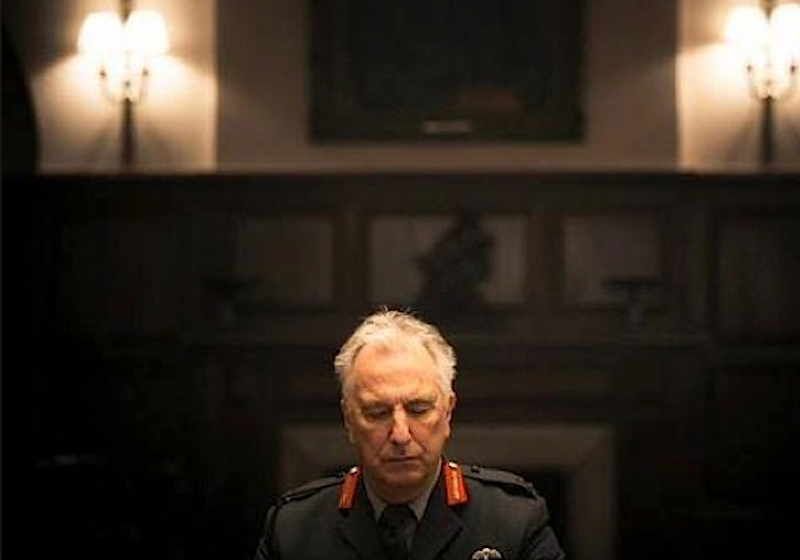 How will President Obama be remembered? After George W. Bush, Obama’s two terms feel like an unqualified success, “Morning in America” after eight years of incompetency, fear, money hemorrhaging, and thousands of dead Americans at home and abroad. Bush didn’t do anything right—the best you can say is that he had a sensible immigration policy, and at worst, that he was simply the bumbling monkey puppet controlled by Dick Cheney and Donald Rumsfeld. After all that, Obama! What’s not to love? Gay marriage, the Affordable Care Act, cleaning up the Iraq War, not sending troops into Libya or Syria. Not to mention all the genuine emotional gestures: singing “Amazing Grace” at the memorial service for the victims of the Charleston shooting, crying and refusing to hide his frustration with our weekly spree shootings, dissing Nancy Reagan by skipping her funeral and going to South by Southwest instead, and his handling of constant insubordination and racist disrespect from the GOP. Democrats, what more do you want? Can’t we just settle and enjoy what we had before we head back into the wastelands of President Clinton or Trump?

No: according to The New York Times, “Obama’s Embrace of Drone Strikes Will be a Lasting Legacy." I’ve seen this criticism so many times from left-leaning people and every time it makes my head spin. Writing for the Times’ op-ed section, Micah Zenko says that “a central component of Obama’s drone warfare legacy will be the unfilled gap between how his administration has justified drone strikes and how they are conducted […] Ultimately, Obama succeeded in making Americans comfortable with drone strikes, as they are generally supported by the American public (though opposed throughout the world), and wildly popular in Congress.” He goes on to say: “Americans will never know much more about these operations than what the Obama administration has selectively revealed.” Well, good! Who wants to know? We’ve got people to kill and a serious Medusa of an enemy over in the Middle East that we need to rain hellfire upon. Why risk American lives on the ground? Why even leave a shoe-print? It’s incredible that the same people that vehemently opposed the bogus Iraq War are just as disgusted by Obama’s sly use of drones. Collateral damage? Who cares!

There’s an excellent new movie out about all this called Eye in the Sky, and it really is amazing, the best war film I’ve seen in ages. It follows a dozen characters spread out all over the world as they debate whether or not to strike a house in Kenya with high level targets and terrorists strapping explosives to themselves and preparing to go out and blow up a mall. Problem? Oh, there’s a little girl selling bread in front of the house, within the kill zone. As we bounce back and forth between eager Colonel Katherine Powell (Helen Mirren), ready to strike, Lieutenant Frank Benson (Alan Rickman) leading a boardroom of U.K. officials stuck in a Twelve Angry Men moral deadlock, and the actual soldier controlling the drones with his finger on the trigger (Aaron Paul). Eye in the Sky plays out in real time, edge-of-your-seat stuff, a remarkable piece of entertainment and as a test for what people think about this very new style of remote warfare. It touches every trope of the genre with the efficiency and urgency of a play—U.S. versus U.K. diplomacy and legality, remove of the general versus the weight of the soldier, optics and propaganda, the stark contrast between the chi-chi hotels and boardrooms where these decisions are made and the hellish desert landscape of poor Nairobi.

I want to see this movie again and again with all my friends just to get their take on what should be done. Me? Bomb the fucking house! I’m with Helen Mirren, but if we had our way this movie would be 20 minutes long. I mean, how can you argue that killing the terrorists and the little girl is worse than letting the terrorists potentially kill 80 people with suicide vests? Even if they kill two people, it’s worth getting rid of them while you can. It’s a shame about the girl, but so what? She was mighty unlucky, but it blows my mind that anyone without flowers in their hair can think that this is a Sophie’s Choice. Get rid of them! Alan Rickman’s character has a devastating line at the end, after this cow of a foreign minister calls his actions “disgraceful.” She unloads on him for deciding to strike from the safety of their boardroom, and he reminds her that he served and personally attended to the aftermath of five suicide bombings. He looks her dead in the eye and says, “Never question a soldier about the cost of war.” It’s a line that you feel in your gut, and it’s quite something to go out on, as this was one of Rickman’s last completed films before his untimely death two months ago. The film is dedicated to him, adding another level of meta-moral stuff and the relative value of human lives.

Unlike the odious and propagandized Zero Dark Thirty, this film doesn’t drag, and doesn’t hew to either side of the central question. Constructed classically like a Greek play, Eye in the Sky is the most remarkable film I’ve seen in a long time.