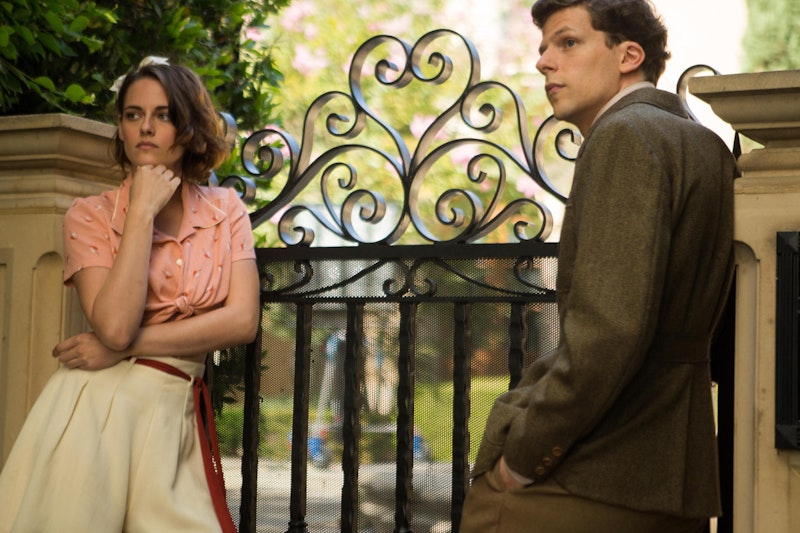 Woody Allen, who turned 80 last year, has settled into a pattern in the last 20 or so years: He makes a new movie every year, but only roughly one in four of them are any good. Café Society, his newest film, is one of the good ones—his best since Midnight in Paris.

Café Society has a definite “Woody's greatest hits” feel to it, bringing in a lot of things we’ve seen before in Allen’s work: a New Yorker who hates California. A loud, belligerent Jewish family sitting around a too-small table. Love for a flighty woman that’s first unrequited, then very much requited. A guy who pays a hooker but doesn’t actually have sex with her.

But this is far from another Annie Hall rehash, for one reason: it’s the best-looking movie Allen has made in many years, thanks to beautiful cinematography from Vittorio Storaro. It’s been a good year for great-looking movies about old Hollywood—first the Coens’ Hail, Caesar, and Warren Beatty’s Howard Hughes film, Rules Don't Apply, on the way later—but Café Society might be the most aesthetically pleasing of all.

Café Society stars Jesse Eisenberg as the latest Woody Allen stand-in. He’s a nervous, nebbishy Jew, who leaves the outer boroughs to head to Hollywood for a job with his super-agent uncle (a never-better Steve Carell). He soon becomes smitten with his uncle’s assistant (Kristen Stewart), and they begin a sweet romance, complicated by a third participant in the triangle, as well as the two’s differing, shifting attitudes towards fame and luxury. The film also focuses on Eisenberg’s family back in New York, including his gangster brother (Corey Stoll), his mother (Jeannie Berlin) and his sister (Sari Lennick.)

The film is helped by a strong cast. Eisenberg is at his best since The Social Network and is perfect for the pseudo-Allen role even if he’s playing younger than he actually is. The Twilight movies falsely convinced the world that Kristen Stewart is a bad actress, but she’s spent a couple of years proving us wrong and does it again here. Stoll, who played Ernest Hemingway in Midnight in Paris, is a smart fit with Allen, while it’s also great to see Sari Lennick, who played Michael Stuhlbarg’s wife in A Serious Man, but hasn’t, I believe, been in anything since. There’s even Tony Sirico—Paulie Walnuts from The Sopranos—in a bit part as a monosyllabic restaurant owner.

I’m not entirely sure that the film’s overarching themes come together in the end, and its New York and L.A. halves at times feel like two different movies. But I didn’t mind, because the film looks so good and Eisenberg and Stewart are so good together. This is their third film opposite one another, after the very good Adventureland and the very bad American Ultra; Café Society breaks the tie for the good.

Equity has a fantastic idea for a film, and puts the exact right actress at the center of it. It’s a shame that it soon devolves into a totally pedestrian financial crisis thriller.

The film, directed by Meera Menon, has a simple conceit that’s quite refreshing: It’s a slickly filmed, Wall Street-style financial thriller, in which the three main characters are all women, and all of them deal with various forms of everyday sexism. And unlike a lot of movies this year attempting to claim the feminist mantle, Equity actually has women as its writer and director.

Anna Gunn (Skyler from Breaking Bad) plays the lead role, as a hotshot investment banker trying to put together a deal after her previous one fell apart. Sarah Megan Thomas is Gunn’s protégé, a young and ambitious banker balancing career with family. And Alysia Reiner (best known as the evil prison executive from Orange Is the New Black) plays a prosecutor who’s investigating the deal in question.

The plot concerns attempts by Gunn’s character to shepherd a tech IPO, of a company whose CEO dresses like Mark Zuckerberg but is actually an aggressive British douchebag with a propensity towards sexual harassment. Meanwhile, Gunn’s boyfriend (James Purefoy) is possibly being manipulated by a hedge fund to assist them in an insider-trading scheme.

The idea (and intentions) of Equity are spot on—we’ve never really been shown in this type of movie how the everyday sexism in business is brought to bear among women in this particular world. While the film isn’t subtle about what it’s doing, it never quite screams the subtext either. And it’s always a treat to see Gunn, whose treatment by fans during her years on Breaking Bad was sexist in its own right, in a leading role.

It’s too bad that the actual business deal plot, which takes over the movie in the third act, is so uninteresting, and never really ties in with the overarching themes. And the other two actresses—who double as producers of the film—don’t make nearly the impact on screen as Gunn does.

Movies about complex high finance are hard to pull off. Scorsese’s The Wolf of Wall Street threw the kitchen sink at the problem and it worked. The Big Short, last year, had the benefit of one of the year’s smartest scripts. Money Monster, earlier this year, failed for multiple reasons—bad performances, bad writing, little understanding of its subject matter. Equity is better than that.

Captain Fantastic is a movie with a lot of ideas that aren’t typical of movies these days, and not only because it features a family of rural mountain people celebrating Noam Chomsky’s birthday. It doesn’t ultimately hold together and the third act is a mess—including the highest amount of false endings of any 2016 release—but there’s a lot of wonderful stuff here.

Viggo Mortensen, in his first starring role in about five years, plays Ben Cash, a father of six who lives off the grid with his large brood in the mountains of Washington. But he’s no right-wing survivalist—Ben is actually a lefty who teaches his kids Marxist cant, something which the film is considerably less smug about than you’d think.

When he gets word that his wife, who had left the compound to seek mental health treatment, has died, he sends his brood off on a long road trip to the funeral, putting them into conflict with the late wife’s parents (a wonderful Frank Langella and Ann Dowd) and his sister and her husband (Kathryn Hahn and Steve Zahn.)

The best thing about the film is the performances of the kids, especially George McKay as Cash’s oldest son; his attempts to talk to girls, especially, are a highlight. Samantha Isler and Annalise Basso also make strong impressions as the two oldest daughters. Meanwhile, Mortensen shows just how much he’s been missed.

It’s unfortunate that when the film has to make a decision over whether or not it believes in its own premise, it just sort of splits the difference—doing so over the course of a final act that drags on for what feels like a never-ending ending.