Boys and Girls of America, Remixed

On “Nosedive” and “Playtest,” from Black Mirror Season 3. 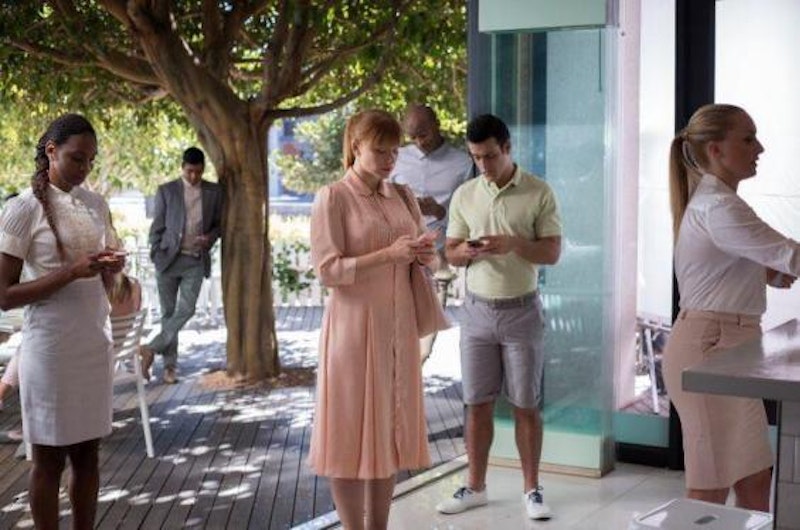 That those near-to-final scenes from the first two episodes of Black Mirror’s third season feature women weeping, their makeup smeared and askew, feels significant. In one instance, a knife-wielding young woman in a soiled bridesmaid’s dress confronts a wedding party; in the other, an aging mother dials the smartphone of an only son who’s gone missing. Each scene is notably penultimate, teeing up the approximation of a moral—though anyone who’s spent time with the first two seasons of this series is well aware how pat and tired the notion of a Black Mirror “kicker” is. These endings are calibrated to rattle around in our psyches for weeks, months, even years.

While in the past rooted in England, creator Charlie Brooker’s homeland, the show is now extremely interested in the United States. “Nosedive” and “Playtest” take pleasure in pointedly tweaking and taunting a pair of All-American archetypes, enthusiastically cherry picking pop cultural markers en route to too-recognizable oblivion.

What happens when people stop being real, and start being polite? “Nosedive” follows the trajectory of Lacey Pound (Bryce Dallas Howard), a functionary-qua-striver in Any Exurb, USA. Hers is a world where everyone has eye implants, everyone has ratings set between 1.0 and 5.0, everyone automatically must view everyone else’s ratings, and everyone can up- or down-rank everyone else. Pound jumps at the chance to serve as bridesmaid at a more popular frenemy’s wedding, kickstarting the plot.

Oppressive niceties and pastel palettes predominate, recalling Edward Scissorhands, The Stepford Wives, and Clueless, while shades of Super Sad True Love Story lend the premise a heightened anxiety; the ocular implants recall Black Mirror episodes “The Entire History of You” and “White Christmas,” though functionalities differ. Up to its midpoint, every single second of “Nosedive” is crystal-brittle, and the insincere politeness is so profoundly suffocating. I savored some of the minor surrounding details: the pained smiles everywhere, the manipulative holograms, the rating-excluded sci-fi mutants Pound hitches a ride with at some point, the random interjection of footage from Home Improvement.

Girls and women often feel societal pressure to be graceful, accommodating, and unyieldingly pleasant. While juicing and incentivizing these behaviors, “Nosedive” interweaves them uneasily with class, credit scores, and reputation. This society is, honestly, the absolute worst of sorority culture, and beyond this sliver we’re shown, it’s difficult to imagine this technology operating in the political, educational, military, and media realms.

If “Nosedive” begins as future-tech anathema for young women, “Playtest” opens as modern-day fantasy for young men. After his dad dies, consummate bro and video game aficionado Cooper (Wyatt Russell) leaves the U.S. on a walkabout, backpacking through foreign locales in a montage that recalls the “Victor Goes to Europe” sequence of Rules of Attraction, albeit G-rated. Cooper winds up in London, meets and beds a hot gamer/reporter, realizes he’s broke, then agrees to be a guinea pig for a video game company to earn enough cash to fly back home—all the while sidestepping phone calls from his mother, who has no idea where he is. Let’s say that’s the extent of things. If you can subtract Black Mirror and “fiction” from this premise—pretend it’s a story a friend is telling you over dinner—there’s something romantic and exciting about it. Of course, you can’t.

Like the prototype Cooper agrees to try out—a game designed to prey upon his own fears and customize itself around them—“Playtest” is a trap, a maze with no escape. The experience of watching is itself excruciating, and left me pausing for breaks or situating myself across the room from my laptop as events occurred (or didn’t occur) onscreen. Once you’ve reached the end, it becomes necessary to recontextualize and rationalize the perspective from which everything is viewed, to find the moment where reality yielded to the fruits of Cooper’s imagination. That line, you’ll find, will shift. Maybe that line was never real. Look, just call your mom back, okay?