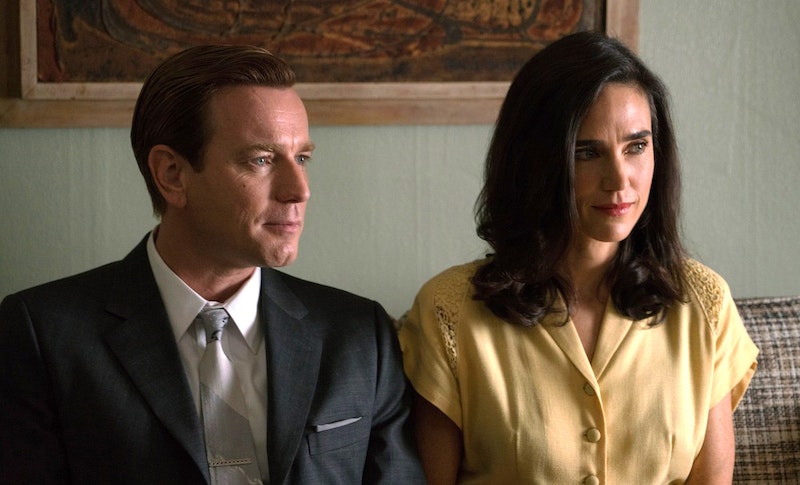 No one’s had any luck adapting Philip Roth novels this year. Indignation, released two months ago, was a very strict reading of Roth’s novel, one of his later works. It’s a slight but haunting book, punctuated with an incredibly bleak ending that has the college-aged Marcus Messner sent off to fight in the Korean War, where he’s killed after being tortured, his genitals mutilated. None of the gory stuff made it into the movie, and it’s reframed with Messner’s arbitrary and unfortunate death moved to the beginning, so we know his fate all along. The book builds from baseless anxiety in the form of Messner’s worrying and overbearing parents, through a series of seemingly insignificant but dependent decisions that lead to his being sent away after expulsion. No one wins—but without Roth’s beautifully bleak tangents on life, death, and society in early 1950s America, the literal translation of his plot ends up totally sterilized and lifeless.

The same can be said of Ewan McGregor’s adaptation of American Pastoral, Roth’s magnum opus. It’s a much longer and more complicated book that demands at least two and a half hours to convey the scope of the story, which winds through post-WWII Brooklyn, from the radical 1960s, the violent and paranoid 1970s, to the comfortable melancholy of the 1990s, when Roth’s generation is felled by prostate cancer, heart disease, and countless deaths in the family. Once again, the novel’s framing is simplified and characters and events are conflated: Roth’s stand-in Nathan Zuckerman (played by David Straithairn) wanders around the gym of his old school at his class’s 50th reunion, reminiscing about Seymour “Swede” Levov, “their JFK,” a man that excelled at everything and whose future would surely be filled only with good fortune. Roth’s detailed dismantling of that fantasy isn’t something that can be conveyed on film. Without the prose, we’re left with the skeleton of a story and all the plot points along the way that come off as arbitrary and bizarre without pages and pages of Roth setting it up and rambling and connecting it all to his vision of American failure at every level.

The trailer for American Pastoral suggests some of the ineffable aspects of the novel through a montage of images alone: a flag being raised, a bomb blast, a woman examining her reflection, rioting in the streets, Levov literally looking out to pasture at his wife and daughter, silent fights in the family kitchen—it’s an atmosphere of profound loss that cannot be communicated by cannibalizing crumbs from the prose for narration and stilted dialogue. As always, other things are cleaned up: Seymour Levov’s daughter Merry is hideous, fat, and acne-ridden in Roth’s book—Dakota Fanning is none of the above, though she’s great as the stuttering kid driven to murderous radicalism through some seriously sublimated parental issues. And all of this mystifies Seymour and his wife Dawn throughout the book: the perfect couple set up to succeed ends up with the worst possible lot in life, and there’s no one to blame. The manic confusion, desperation, and sadness of Roth’s expansive prose is once again lost, and we’re left with traces of what could’ve been an amazing movie. Instead it’s something filled with signposts and pretty people.