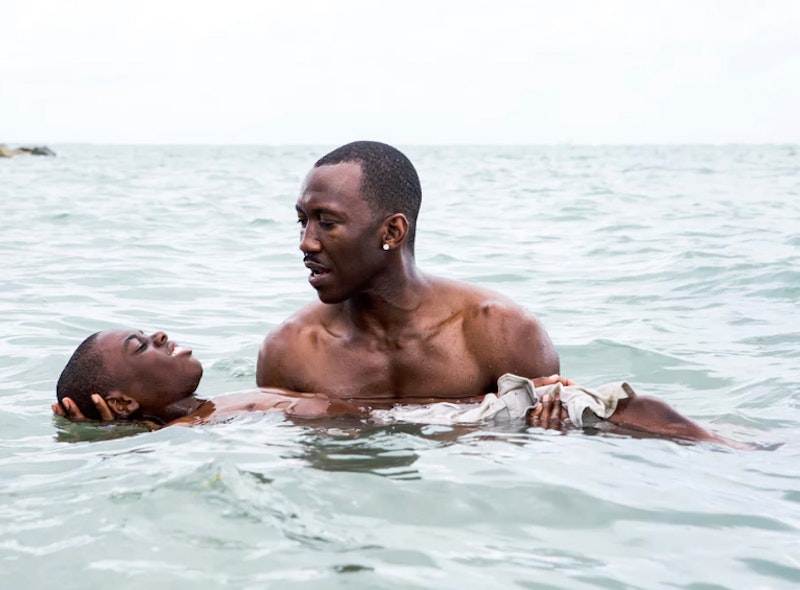 What’s most wondrous about Moonlight is that it’s an uncommonly small story that has so much going on. It’s a beautiful, graceful, at times heartbreaking film, and one of the year’s best.

Moonlight is directed by Barry Jenkins, whose only previous film was 2008's Medicine For Melancholy. It tells the story of a single character and his quest to come to terms with his identity. The fact that the character, known at various times as “Little,” “Chiron,” and “Black” is gay, is one part of that identity. Ultimately, it’s the story of a young man’s quest to know what it means to be a man—these days, a very timely question.

Jenkins’ film, based on a Tarell Alvin McCraney play called In Moonlight Black Boys Look Blue, is told in three parts, with its protagonist played by three different actors at different ages. In the first part he’s a young boy in Miami’s Liberty City, played by Alex Hibbert, with a drug-addicted mother (Naomie Harris) who’s pulled into a quasi-nuclear family with local drug kingpin Juan (Mahershala Ali, from House of Cards) and singer Janelle Monae.

In the second part, he’s a teenager (now played by Ashton Sanders), relentlessly bullied at school by everyone except his one friend, Kevin (Jharrel Jerome), until a sudden betrayal makes things go south quickly. And in the third part, now played by Trevante Rhodes, he’s a muscled drug dealer, clearly having modeled himself after Juan. Until one day, he gets a call from his old friend Kevin, now played by Andre Holland.

There’s a lot that’s remarkable about Moonlight, but the performances by the three actors playing the protagonist stand above everything else. Even though they differ wildly in terms of appearance and size, the three of them use a lot of the same facial expressions and mannerisms throughout—I believed within seconds that I was watching the same character all three times.

The other major virtue is the gorgeousness of the filmmaking. This isn’t the Miami of Miami Vice, or really of any version of Miami that’s been seen much on screen in the past. Jenkins and cinematographer James Laxton do amazing things with light and reflections, especially multiple sequences set on the beach, one at daytime and another against the actual moonlight—the filmmakers appear to have taken the title of the source play as a stage direction.

Each of the three parts of the film has its charms; the relationship between Little and Juan, in the first part, is extraordinary. But it’s the third act, with a long dialogue scene in a restaurant between Rhodes and Holland, that brings the film into the stratosphere. We’re supposed to wonder which direction it may go, and what may be said. And while the film takes its time, we never get the sense that it’s cheating or unnecessarily dragging things out.

Moonlight is amazing, and we need more films like it. Let’s hope we don’t have to wait eight years for Barry Jenkins’ next one.