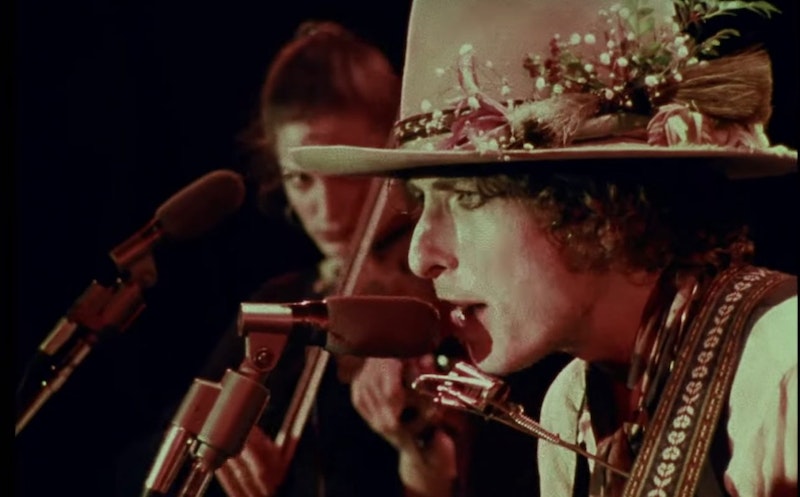 Skip all the hand-wringing over the fictional characters in Martin Scorsese’s new Rolling Thunder Revue—as if that’s unusual for Dylan—and appreciate the film as a real document of the mid-1970s. While Scorsese’s new rock project isn’t as focused as the brilliant 2005 No Direction Home (which ended in 1966, just before Dylan’s fishy motorcycle accident—it’s clear he wanted to live, probably an impossibility if he’d kept up his amphetamine-induced pace of the previous two years—with excerpts of Dylan and Hawks in probably the best live concert recorded), and is padded with way too much of has-been Alan Ginsberg, interested viewers, a limited number at this point, find out again that Dylan, in his mid-70s, speaks in a clear, thoughtful voice. None of the put-on mumbling and jumbling of his live appearances in the past 35 years.

[Scorsese’s Rolling Thunder was a long time in the hopper: Ginsberg, who died in 1997, is interviewed (probably dug out from archives); as are the deceased Rubin Carter (2014) and Sam Shepherd (2017). It’s a hobbyist’s show, and as one of those hobbyists, I was delighted to see it.]

Like No Direction Home, it’s Dylan building a legacy on his terms while still alive, and he’s as clever as you’d expect. At the end of the film, asked about the impact of the Rolling Thunder tour, he says, “Nothing. Not a single thing. Ashes.” Right. That’s why he cooperated with Scorsese on the sort-of documentary.

What struck me immediately—I was 20 in ’75 and attended the “Night of the Hurricane” on Dec. 8 at Madison Square Garden, the last show of that half of the tour (the second leg was far more acrimonious; a friend of mine saw it at the Houston Astrodome and wrote me, saying it was “bad vibes, Altamont-style")—was how diseased the Northeast looked in that lost economic decade, as the caravan moves from small New England towns and into Canada, litter everywhere, cluttered and beaten-down storefronts and fast-food franchises and the sun never shines. The entire northeast was like that: NYC filthy and on the brink of bankruptcy, just like Philly, D.C. and Baltimore.

Today, littering is an offense that draws scorn like smoking; back then it was practiced without a thought. I was guilty, as were most of my acquaintances, not out of malice or defiance of the “Don’t be a litterbug!” PSAs, but because it was accepted behavior. This was pre-Earth Day.

There are several weird scenes in the film, like an abundance of Jimmy Carter (who was hardly a household name at the time of the tour) and his supposed reverence for Dylan and the Sharon Stone as nearly-jailbait riff, but how many people under 40 know that Gerry Ford (!) was the victim of two assassination attempts? And I can’t be alone in wondering why Dylan wore the same clothes almost every night, the hat with flowers as a signature makes sense, but the dirty bellbottom jeans and cool dress shirt don’t. No wardrobe functionary along for the ride? No laundromats? Dylan looks as grimy as the streets he navigates in a Winnebago. And near the end of the film, a heavily, and badly, made-up Roger McGuinn, singing a verse of “Knockin’ on Heaven’s Door” looks like a tall Billie Joe Armstrong.

(There’s a brief segment reminiscent of Dont Look Back, when Dylan, McGuinn and Joni Mitchell are at Gordon Lightfoot’s house, strumming guitars and when Mitchell gets to her new song “Coyote,” Dylan, like his patronization of Donovan in the earlier film, doesn’t look too interested. Perhaps that’s why Mitchell purportedly can’t stand Dylan.)

I don’t have a photographic memory of the show I saw in December of ’75, but it sure beat Dylan’s “Comeback Tour” of 1974 (which I saw at the Nassau Coliseum) when Dylan and the Band rushed and shouted the songs, as if they had a dinner reservation to make. Listening to the discs now (as I did on the two-disc set in 2002) I was struck that with a few exceptions, Dylan hurried up his vocals on Rolling Thunder as well; but the chaos of the five-hour concert, with famous and young singers adding songs (naturally, not included on Columbia’s hope for a money-grab in its release of a 14-disc box set) made it a lot more compelling.

There are a few exceptions, one shown in the film: near the end of the tour, Dylan gives his most dynamic performance of “Hurricane,” standing on the stage with his guitar, dead-serious, spitting out the lyrics, all the while staring at violinist Scarlet Rivera a few feet away. It’s their moment: maybe there was more going on between the pair after hours, but regardless, it’s electrifying. Upping the ante, it could be the most riveting five minutes I’ve ever seen in rock concert film/documentary.

Back to the voices. The best discs in the set are the rehearsals; Dylan’s loose as he sings snippets of a laid-back “Lily, Rosemary and the Jack of Hearts,” a soft “One Too Many Mornings” and magnetic versions of “This Wheel’s on Fire” and “Tears of Rage,” two songs that weren’t included in any of the concerts. In fact, there was little deviation from show-to-show, with varying quality, but man, I got sick of the closer “This Land is Your Land,” with different singers taking verses, the most annoying of which is Bobby Neuwirth croaking out some words in a circa-’66 Dylan voice.

It’s accepted wisdom that from John Wesley Harding until Blood on the Tracks, Dylan sang in a country/crooner’s voice, and while that’s true on the released records, his contribution of “Dear Mrs. Roosevelt” at the Woody Guthrie Memorial concert in January ’68 (just after JWH was released without fanfare), the five songs from George Harrison’s “Bangla Desh” concert in the summer of ’71 (a gorgeous, twangy “Hard Rain”), and his guest appearance in late- 1971 with the Band at New York’s Academy of Music, singing a rollicking and frenzied “Down in the Flood,” shows anyone who listens that Dylan could—and still does—change his vocal style whenever it suits him. That comes through in the rehearsal discs, and the final “bonus” set, with a fabulous “Simple Twist of Fate” and “Fourth Time Around” that’s almost a double of his Manchester show in ’66.

The stupidest review of Rolling Thunder Revue I read was the June 11 “Bob Dylan’s Spinal Tap” by Kyle Smith for National Review. He focuses almost solely on Scorsese’s fictional elements, botches facts (he says Dylan and Joan Baez were “longtime lovers,” as if two or three years qualifies as long) and has little to say about the songs performed. He writes: “Wow: This was a trippy time. The mid-70s were far out, man. Never, before or since, in any era, ever, have human beings draped themselves in such hideous clothing.”

Not entirely inaccurate, although it wasn’t as if everyone wore leisure suits and wide-collar polyester shirts. Besides, the 1960s had Nehru jackets, ugly Garrison belts, love beads and clam-diggers; the 1980s saw men wear ridiculous of-the-moment designer suits and purposely prominent suspenders; today, millions just look like slobs with sweatpants and jeans with elastic waistbands.

Smith was born in 1966 and it’s unlikely he attended any of the Rolling Thunder shows, so it’s not surprising he concentrated on the less important parts of Scorsese’s film. As I wrote above, Rolling Thunder Revue isn’t for everyone, but if you followed rock in ’75 (and had the fortune to see one of the concerts), it’s a curious but effective snippet of cultural history. And far better it was Scorsese’s film, rather than someone like Ken Burns.