Late Night is a movie that's all platitudes with no pulse. D- 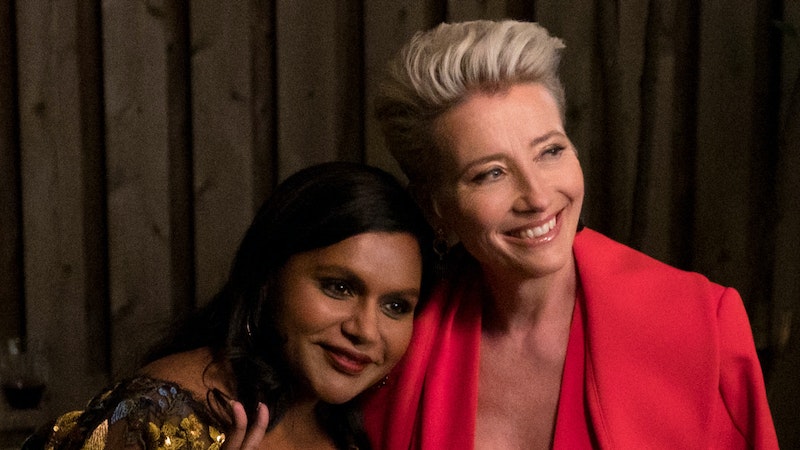 Hollywood’s class blindness continues apace with Late Night, a comedy starring Emma Thompson and Mindy Kaling (who also wrote the movie). Thompson plays Katherine Newbury, the only female talk show host in the business, a woman whose tokenism suddenly turns suspect when the public finds out her writing staff is all white men. So they up the token quotient and hire Molly Patel (Kaling) as the first ever female writer on Newbury’s Late Night. And so Ms. Patel teaches the pig men in her office how to “Do Better” and behave more like professionals and less like the fat, stunted adolescents that they are. One would think that Kaling, who spent years acting on The Office and has since appeared in some good movies (The Night Before, Inside Out, and This is the End), would’ve picked up some tips and tricks and had the skill to write a decent feature film by now. No. I haven’t read her memoirs—who would?—but they must be marginally more interesting than Late Night, a movie that’s all platitudes with no pulse.

There’s nothing wrong with the premise. Just last month, Long Shot succeeded in being funny and socially conscious. Charlize Theron played a Hillary Clinton “girlboss” type who falls for typically schlubby Seth Rogen. What could’ve been a lifeless message movie was able to get digs in at Justin Trudeau, Donald Trump, Harvey Weinstein, Elizabeth “Lisa Simpson” Warren, and the Murdochs without ever being defanged or lost in the morass of suspect morality).

Late Night has a similar dynamic, with Kaling serving as the (relatively) hip foil to the desperately out-of-touch Thompson, who doesn’t know the names of any of her writers and refers to them as numbers. Implored by a bored and stupid public, Thompson is forced to not only hire Kaling but actually visit her writers’ room. The only good joke in the movie comes here early on, when Thompson asks where a writer named “John Philips” is. “Katherine, he died in 2012. Non-Hodgkin’s lymphoma.” It’s the only joke in Late Night that lands. I saw it at a mostly empty matinee on Saturday, and it was crickets, interminable stretches of dead air where they had clearly built in spaces and pauses for laugh breaks.

Kaling can’t help herself, piling on practically every inequality and disability imaginable: Thompson’s husband (John Lithgow) has Parkinson’s. This is never relevant to the plot, its only function is to show that this film features a character with Parkinson’s. When her ratings flounder, the network tries to replace Thompson with a brain-dead Dane Cook stand-in played by Ike Barinholtz. Thompson has an affair with one of her writers and gets caught—then they go into the “slut-shaming” bit. Give me a fucking break. And let’s not forget that Kaling’s character was hired purely for her genetics, plucked not out of an improv group or a comedy club but a chemical plant in Pennsylvania. Not Scranton, surely? Her character has nothing to say or contribute beyond telling Thompson to “be herself,” to loosen up. What a concept.

The superficial PSA aspects of Late Night are irritating, but what makes the movie so woefully out of touch is its class blindness. All of the issues and adversities faced by Kaling and Thompson are, to use the language of the film, “first world problems.” Kaling’s rock bottom is moving to a six-floor walkup south of Gowanus. How tragic.

Meanwhile, Thompson ironically reinforces every stereotype about older people by constantly making jokes about her lack of interest in the Internet or meme culture. She’s a condescending bitch, and remains so throughout the film. The only “positive” change in her personality is her newfound willingness to exploit writers of all races and genders. So Thompson’s talk show host ends up turning out a show that’s just as smug and vapid as the actual late night hosts that stain the airwaves in our world (Seth Myers makes a cameo here as himself, in full promo mode, no self-deprecating humor or This is the End subversion). Late Night proves that anyone can make a mediocre and unfunny movie, even a second-generation Indian woman who was on The Office.