Eternal Pursuit and Return of the Self

On identity, consciousness, and memory in Being John Malkovich. 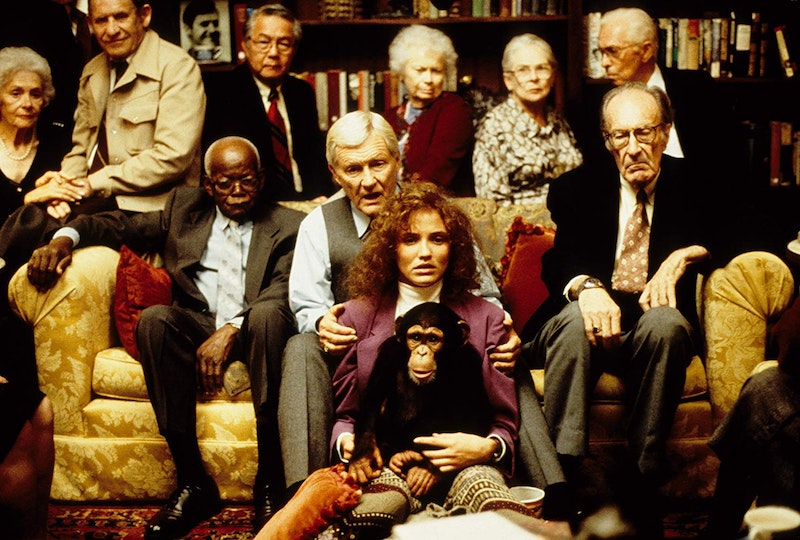 This is the fourth in a series of articles on American films released in 1999.

The saying “Be true to yourself” is a cliché. And yet, like most clichés, there’s a shred of truth in it. The question that arises from this saying, however, is who is this self that you should be true to? For that matter, what is truth? And, what if you don’t want to be yourself but you would rather inhabit someone else’s being, as fantastical as that sounds?

These are big philosophical questions that require careful deliberation. But they don’t always have to be dealt with in theoretical ways. Spike Jonze explored these questions (with great success) in his film, Being John Malkovich (1999). Charlie Kaufman, who wrote the script, is known for his probing of questions of identity, consciousness, and memory, as seen this in Adaptation (2002) and Eternal Sunshine of the Spotless Mind (2004).

In Being John Malkovich, Jonze and Kaufman tackle issues of individual consciousness, burdens of such a metaphysical state, and role of sexuality, sexual orientation, and laws (or lack thereof) of erotic attraction. The story revolves around Craig Schwartz (John Cusack), a poor and struggling puppeteer. He’s good at the art of puppetry, putting on street shows about Heloise and Abelard accompanied by mournful classical music but his career is non-existent. Craig doesn’t have an actual job, and lives with his wacky wife, Lotte (Cameron Diaz), who’s obsessed with animals. In fact, their apartment is filled with animals, which includes a chimp with post-traumatic stress issues. Schwartz and Lotte are not in a happy marriage. They tolerate each other’s physical and metaphysical disorder and various states of disheveled-ness.

Since puppetry won’t guarantee job security or financial independence, Craig takes on a job as a file clerk in a curious company called LesterCorp situated in a curious building called Mertin Flemmer, on an even more curiously placed 71/2 floor. The ceilings are low, it’s unclear what kind of folders are being filed, and Mr. Lester’s secretary constantly misunderstands words that come out of Craig’s mouth.

Immediately, Craig meets overtly sexy Maxine (Catherine Keener), who’s clearly not attracted to him. Craig’s a powerless and pitiful man, and is willing to go to any lengths to get Maxine’s attention. His accidental discovery of a portal that leads into the mind of John Malkovich is what gets Maxine’s attention. Whoever enters the portal is able to experience all of the senses that Malkovich is at that moment going through.

This discovery prompts Maxine to create J. M., Inc., a pseudo-company that, for $200, offers 15 minutes of being John Malkovich. The business plan is a hit until Malkovich finds out about it and goes through his own mind portal. Unlike everyone else, he experiences a duplication of his being—physically everyone looks like Malkovich and the language spoken by endless doubles is merely one word, namely “Malkovich.”

It gets more complicated once Lotte enters the portal, and through Malkovich’s consciousness engages in sex with Maxine. She realizes that she’s in reality transsexual and wants nothing to do with Craig anymore. Maxine, on the other hand, is attracted to Lotte but only when she’s inside the mind of Malkovich.

Craig’s a coward who ends up entering Malkovich’s mind in its entirety and as an experienced puppeteer, is able to fully control Malkovich’s being, which includes decision-making. Craig forces Malkovich to become a puppeteer and it’s only through the inhabiting of his mind in the form of his body that Craig’s career as a puppeteer finally takes off, bringing him fame and money. Malkovich, in the meantime, is imprisoned and in Craig’s metaphysical clutches. Craig’s certainly pulling the symbolic strings.

John Malkovich is playing some half-fictional, half-non-fictional version of himself. He inhabits an undefined space, and real Malkovich’s artistic persona is mysterious and ineffable enough that it lends itself to such an artistic manifestation. He’s at once a brilliant actor, totally secure in his sexuality and career, an entirely complex being, and yet he’s also an ordinary man, who spends time eating leftover Chinese food and ordering bath mats on the phone.

Every character is aiming at becoming someone or something. They’re completely dissatisfied. Craig wants fame; Lotte wants Maxine; and Maxine wants Lotte and Malkovich. They’re escaping their own selves (whose meanings and possibilities they willfully ignore), and the image that’s the hardest to see is that in the mirror. Strangely enough, they don’t desire freedom. They’re willing to live in blissful or miserable ignorance of authentic freedom in order to gain power.

It’s only Malkovich who desires to be free. His freedom, unlike that of the others, is authentic. He’s the one who’s in captivity and whose mind, consciousness, and even subconsciousness, is totalized by another. Essentially, Malkovich has experienced a metaphysical takeover enacted by all the characters—he’s slowly disappearing and an ontological constitution is only a thing of the past. What’s worse, the more he’s experiencing the loss of self, the more he’s being led into the dark abyss of expressionless memory that silences his voice.

Jonze and Kaufman raise questions of free will, sexuality, mind/soul and body dualism, and most of all, an existential restlessness that’s present in all of us. All the characters (except for Malkovich) are power-hungry and are seeing the world through utilitarian lens. “Can this benefit me in any way” is the question implicitly asked by everyone. Only Malkovich has genuine curiosity and a desire for justice because others have invaded his mind, which is the core of his being.

This film is ultimately a tragic meditation on the pursuit of happiness. How do we define happiness? It is, after all, different from one person to the next. What if an individual happiness is sought out at the expense of another’s interior life? Human beings experience captivity and forced silence every day on a smaller or larger scale. But in this case, the big philosophical question is the question of being—are we in an ontological possession of our deeper selves or is someone else indeed pulling the strings? Only the act of an examined life can answer that question for each of us.