Bland on the Run

Traitor embodies what can only be called the Cinema of Incoherence. 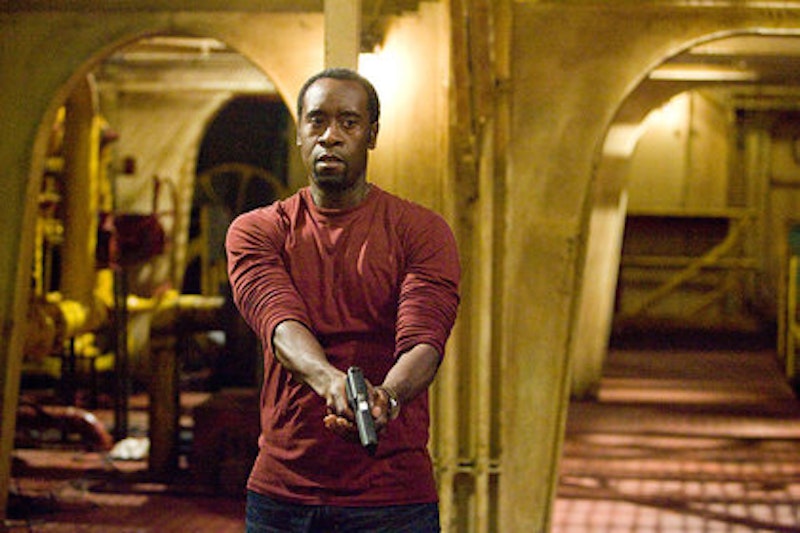 Traitor, the new sort-of terrorism-related film starring Don Cheadle, has a spooky government conspiracy at its meaningless narrative center, but by the end credits I was more convinced of a Hollywood movie-music conspiracy. There surely must be a group of central Europeans chained to synthesizers and ProTools setups in a bunker somewhere outside Tererro, NM, churning out the kind of burbling, limply propulsive techno goop that keeps a potboiler like Traitor moving along with the façade of intrigue and momentum. You heard it here first.

The movie’s music is just one indicator that Cheadle & Co. aim for low-hanging fruit with Traitor, namely a spot in the recent canon of Thrillers That Acknowledge Global Affairs—recall movies like Syriana or The Constant Gardener or The Kingdom where the camera jiggles around in high-contrast desert scenes and Hollywood A-listers get to show off a little knowledge of the Middle East and Africa because, you know, they care about stuff. (Traitor is based on an idea by Steve Martin; yes, the guy from Father of the Bride and The Jerk.) Audiences get intrigue, explosions, some familiar screen faces, and we even get to feel a little more up to snuff on contemporary geopolitics.

Traitor, however, addresses the war on terror with about the same level of intellectual rigor that its director, Jeffrey Nachmanoff, brought to the climate change issue in his previous writing credit, The Day After Tomorrow. Cheadle plays a devout Sudanese-born Muslim named Samir Horn who, after watching his father’s car explode as a child and then growing up in America, eventually joins a fanatic terrorist group in Yemen as an adult. Like so many contemporary Hollywood scam artists, Nachmanoff traffics in thematic signifiers rather than actually building stories and characters. Thus we take the drama for granted after seeing newsworthy proper nouns like “Sudan” and “Yemen” flash across the screen, witnessing Samir’s violent interrogation by a couple FBI cowboys (Guy Pearce and Neal McDonough, doing a straight-faced good cop/bad cop routine), and watching a number of ethnically vague brown people speak Arabic in white robes, all jumbled together in an opening half-hour that makes no sense visually or narratively. After all, if you mix arms deals, a couple dangerous-sounding locations, a car bombing, and FBI interrogations together, we must be talking about some pretty pressing stuff, right?

Movies like Traitor, which have pretensions of topical urgency but still bow to lowest common denominator bone crushing (and bunker-made techno) conventions, therefore comprise what we can fairly call the Cinema of Incoherence, the genre for any film that hides its relentless thematic superficiality in a blur of signifiers like those listed above. Hallmarks of the Cinema of Incoherence include faux-realist handheld cinematography and accompanying rapid-fire editing; gaping story holes that get covered up by continuing plot machinations; heavy reliance on military-industrial technical jargon; and a preponderance of expository monologues to periodically convince the audience that the movie isn’t actually incoherent. Extra points go to any filmmakers who wrap a vaguely anti-authoritarian, government-skeptical theme into movies funded by enormous media conglomerates and advertised through corporate marketing overlords in mainstream media outlets—now that’s incoherence!

There are a number of recent movies that would qualify for the category; perhaps controversially, I’d call The Dark Knight a perfect example of High Incoherence, its moral purposefulness and commanding performances masking well the botched editing (what happened to the roomful of millionaires held captive by the Joker when Batman leaps out the window to rescue Rachel?), excessive talkiness, and jittery handheld fight scenes. Syriana also counts, as its writing consists almost entirely of expository monologues (Matt Damon in the desert with a stick; Tim Blake Nelson yakking about corruption) and oil industry jargon. The Constant Gardener (which I liked, admittedly) likewise buries a pretty straightforward man-apart thriller story in a needlessly disorienting nonlinear plot and pharmaceutical industry mumbo jumbo.

Traitor isn’t even as smart as those movies, and its incoherence is more glaring as a result. A barely surprising plot twist gets revealed about halfway through, and this new conspiratorial thread begs questions about the movie’s first half that never get answered. If Samir’s participation in the Islamic terrorist group [SPOILER ALERT, like it matters] is in fact by design of a government official (Jeff Daniels), then at what point did their mission begin? Could they have possibly guessed that, if Samir goes to a Yemen prison, he would be approached, unsolicited, by Omar (Said Taghmaoui), a confidant of the organization’s leaders? (Their meeting itself is the result of a lunchtime prison fight that looks shot-for-muddled-shot exactly like the one that opens Batman Begins.)

For its first hour, Traitor merely looks like high-testosterone Oscar bait for Cheadle, who gets to show his oceanic reserves of sympathy for the Muslim world by reeling off Quran quotations and speaking in Arabic. Once the paranoia-inducing (or is it paranoia-affirming?) switcheroo happens, Nachmanoff just sits back and lets his characters shoot guns, burn files, chase each other through major cities, coordinate derring-do by email, and smash each other’s heads against metal poles. That the villains are radical Muslims doesn’t actually make Traitor a topical film; it merely allows the filmmakers to play on audience fear that’s current and therefore obvious. No storytelling has to be done, because every audience member will immediately understand the context and severity of the issues surrounding all the head smashing. This illusion of “realism” just exists to make sure no one questions the various plot holes, or wonders why this movie, stripped of the occasional subtitle, looks like The Fugitive in bad focus.

Amused and momentarily glad as I was when Traitor’s trick was revealed halfway through, by movie’s end I was convinced that the second half’s neo-vigilante nonsense is ultimately more suspect than the first half’s relatively benign self-importance. If Cheadle wants to act his earnest way through sub-Saharan Africa and make humorless message movies for the rest of his life, he can continue to do so and I’ll continue to remember him best for his turn as Buck Swope in Boogie Nights. But it’s hypocritical to get holier-than-thou in a movie that is just another Cinema of Incoherence clone, another bullet-riddled thriller with a false conscience and unearned sense of self-righteousness. If Cheadle and Nachmanoff are so interested in understanding our supposed cultural enemies and the roots of anti-Western terrorism, they should stop producing stereotypically American schlock that massages our country’s insatiable desire for superficial, expensive cinematic crap.