Getting Tired of May-December

Elegy is just the most recent in a long line of boring old man/younger woman romances. Time to put this trend to bed. 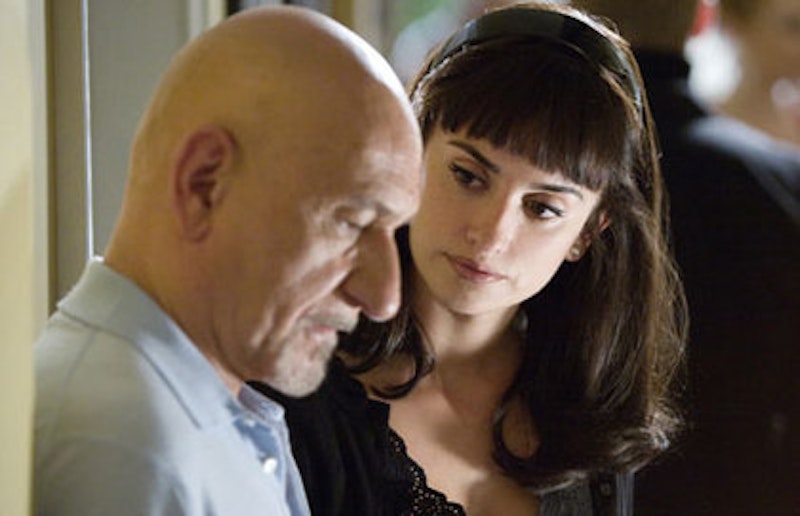 Every once in a while I discover a new movie pet peeve. I already have a few: gratuitous gore, gratuitous indie quirk, spoof movies, Owen Wilson. After deigning this past weekend to see Elegy, the only non-blockbuster playing in New Jersey I hadn't already seen, I discovered a new one: movies about older men dating younger women.

This is a difficult pet peeve to have, perhaps the hardest. In fact, scores of movies have older men dating younger women, especially classic films. It was once very much in vogue, almost required, much more so than today. Some classics include Last Tango in Paris, Manhattan (yes, and every other Woody movie), and half the movies with Audrey Hepburn and Marilyn Monroe. Why? Put simply, a male actor could afford to look old in a film. Nary an actress could do the same, lest those wrinkles show and boobies sag.

So glaring and overdone has this become that recent movies have hit publicity nirvana by featuring older men falling in love with women their own age—Something’s Gotta Give, most notably, but even films as disparate as the remake of The Thomas Crown Affair and Sex and the City make the cut. With all its faults, one virtue of Sex and the City was its glamorization of being female, over 40 and able to get men of comparable age. Kim Cattrall nabbed the hottest lover and is 52. But this isn't revolutionary. Other movies have inverted the stereotype, showing older women with younger men. Both Alfie movies, the recent Being Julia and Freudian Savage Grace have all marketed themselves as stereotype-busters. The most famous is (of course!) The Graduate, but let's not forget that the late, great Anne Bancroft was a mere 36 when the movie came out and Dustin Hoffman was only six years her junior! That's hardly May-December. More like May-July.

With all this baggage, Elegy, starring Penelope Cruz and Ben Kingsley, was on a short leash before I even entered the theater. Sheer boredom alone compelled me to the buy the tickets, and I certainly didn't trust the good reviews, aware that most critics are older men who would quit their jobs and families for just one night with Ms. Cruz. But the film had its draws: a female director, Isabel Coixet, known for subtle, artful directing, a story by Philip Roth, infallible Cruz and effortlessly capable Kingsley. I thought: this should be pleasurable enough.

It was, but only to a point. The direction was artful, yes. Cruz did her best with a thinly drawn character. Kingsley was as vile and charming a character as I'm sure Roth intended. But Coixet made a mistake in my book: she took too long. A full two hours with Kingsley's character—the older man fearful of his fading virility—was too much for me to handle. And [SPOILER ALERT] that Cruz had to lose her breasts in order to finally be acceptable to the older man was equally infuriating (maybe Roth explained it better).

I'm not an absolutist. I will continue to see movies with older men exercising their right to frolic with women one-third their age before keeling over in erotic delight. It's unavoidable, and directors today are—thankfully—exploiting this cliché with some irony and humor: to hilarious effect in John Turturro's Romance and Cigarettes and with great subtlety and subversion in Steve Buscemi's Interview. But I simply lack the patience to indulge overly earnest depictions of older men who insist on throwing away all they have for women younger than their children. I can handle it if done coolly, with charisma, as in almost every James Bond movie. But it's insufferable when the man is a stereotypical academic who fears his own mortality. I don't need to pay to see that. It might be my life in 50 years. Besides, Ingmar Bergman did it better in Wild Strawberries than anyone since and did it without over-fetishizing youth. Please, Hollywood, retire it.

It's enough to send me running to the Estrogen Lovefest that is The Women, the movie directed, written, crewed and cast all by women coming out next month. Yes, it's a cheap chick flick, but at least I won't have to see Ben Kingsley chasing Eva Mendes around like an old dog hungry for a fresh bone.