Six Feet Under My Life Changes

I needed to get out from under my childhood; watching the HBO series helped. 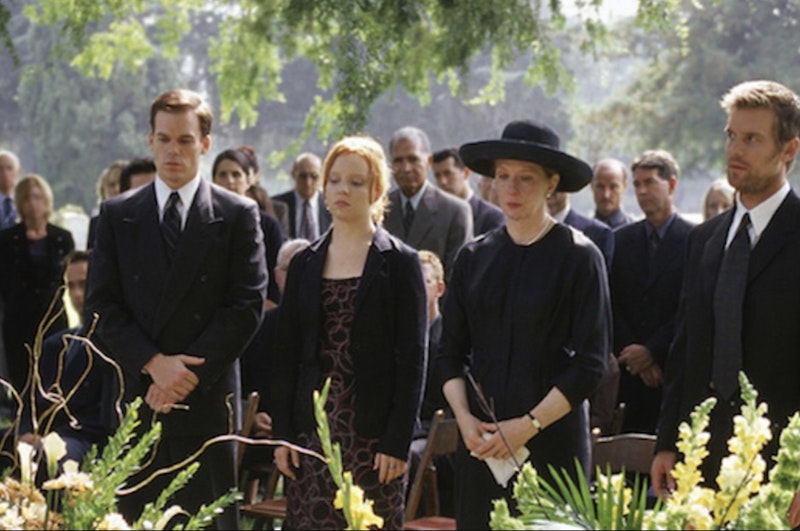 At 21, I was falling apart. Through the end of high school and the beginning of college, I was held together by duct tape and safety pins. In the years leading up to 2001, I appeared to be doing alright, but in truth I was a discombobulated mess. I was determined to live in the moment but unable to let go of fear or self-consciousness. I needed to get out from under my childhood. I had no real trust in myself.

I fell in love and gradually saw myself falling apart. After working in a restaurant and a bakery and a supermarket, and paying off student loans, I moved to the Bay Area to start over and finish school. A year later, Natasha joined me. We moved in together after three painful years of long-distance connections and disconnections. She had her degree and I was finally back on a path toward mine. We were 24.

During those in-between, topsy-turvy years, I turned to music or indie films. I was seeking art that expressed the sometimes-unbearable weight of existence and made something beautiful out of our angst. Six Feet Under debuted on HBO in June, 2001. It immediately resonated. I watched it with friends who were finishing college near Boston while I worked my terrible restaurant job, paid off my debt, and tried to fight off the sense of failure that surrounded me. I listened to music like it was medicine. I measured time by my monthly weekend visits to Connecticut to be with Natasha and form a cocoon around reality, temporarily inside the university bubble I'd left behind.

Why Six Feet Under? The show was centered on an absence that I knew. It begins with a fatal car crash. The father, Nathaniel Fisher, who runs the family funeral home, is now gone. He consistently appears as a projection of the inner thoughts of his children. My parents were divorced when I was an infant. I never knew my father in our house. But I knew him in his house, which we visited every other weekend.

In the show, the two sons are left to run the business, while the younger daughter is still in high school. The anxious mother (check!) acts like a common enemy for the three children to rally around. In the first season, the question of what each character wants to do with their life bubbles up continually.

Six Feet Under was fundamentally about searching. How we’re endlessly searching for a place of comfort and safety. How easy it is to see the world as cruel and threatening, and how an antidote to that suffering is the ongoing acceptance that we’re mortal, so we may as well enjoy life while we're here. Initially, commentators debated whether or not the show was a drama or a comedy. Today, the need for categories falls to the side. It's telling that the divisions between genres are less of an issue 20 years later. The anti-heroes of television have become the heroes. Good writing and indelible characters explore life by exploring comedy in the midst of tragedy.

Alan Ball's artistic vision, from American Beauty through Six Feet Under, opened up possibilities for his characters by refusing to cast judgment upon their behaviors, however questionable. Through psychological depth, background attention toward childhood experience and humor, his characters are given reasons to lash out at the world, but never free passes from the consequences of their actions. We’re all flailing around in the dark, searching for something. The show's driving ethos was empathy and generosity.

Many people are afraid to look at a dead body or discuss grief. Rather than accept mortality, our culture often ignores it. The pharmaceutical industry denies it. The cosmetic industry wants it covered up. Aging becomes a problem rather than a reality. We simultaneously embrace the concept of “You Only Live Once” (YOLO) and refuse to let that singular life end. With money and pills, many of today's 60-year-olds believe they're middle-aged. Their mantra is, "You're only as old as you feel." This isn't to say everyone over 70 should give up, but it highlights the avoidance of death that’s part of modern American life.

The question: has our collective outlook on mortality changed? Do we view life as more precious than we did a year ago? Are we able to incorporate the reality of these deaths into our lives? Or is it simply a number on a screen? While the number acts as documentation, it also pushes mortality into math. The last year has been spent inside for many of us. That means binge-watching and an endless stream of images on screens. I haven't watched much. And I haven't read nearly as much as I expected or hoped to.

I rarely want to re-watch anything, but knew Six Feet Under was an exception. I'm glad I waited 15 years. The world of Six Feet Under is a world of uncomfortable and unending truths. It's always worth re-entering.