The Lady and the Nerd

Hal Ashby's 1971 masterpiece Harold and Maude and its tumultous history. 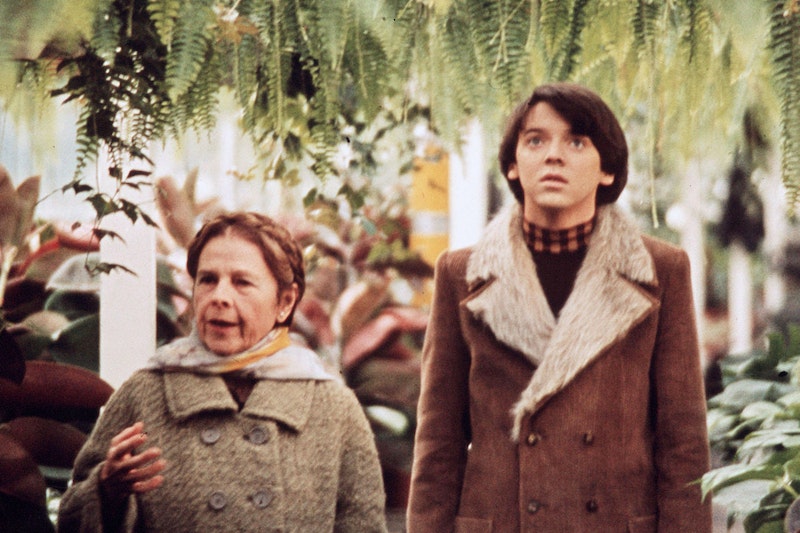 Harold and Maude is no ordinary movie. It’s a touching story about a romance between a 20-year-old boy and an 80-year-old woman. Though ostensibly about death, the film is about living life to the fullest. Upon its release in 1971, it was a commercial and critical failure. It slowly gained traction via midnight screenings at revival houses. In 1983, it finally turned a profit. It’s known as Wes Anderson’s favorite movie and has had an influence on his style. Actor Jason Schwartzman said, “It was the first time that movies made me feel inside the way records did.”

Bud Cort plays a death-obsessed teenager who stages a series of fake suicide attempts to upset his mother. These include hanging, immolation, and hara-kiri. He attends funerals for fun. This is where he meets Maude, a free-spirited octogenarian played by Ruth Gordon. Maude teaches Harold to appreciate life telling him, “A lot of people enjoy being dead. But they are not dead, really. They’re just backing away from life. Reach out. Take a chance. Get hurt even. But play as well as you can.”

The movie was a cultural litmus test. Either you were a Harold and Maude person or you weren’t. The story’s offbeat sensibility and deadpan humor merged with flower-power sensibility questioning the military industrial complex. The film pushes the young man/older women romance dynamic farther than The Graduate. It also deals honestly with death and dying.

Colin Higgins was a 28-year-old film student at UCLA. He saw a notice on the school bulletin board for a room to rent in Bel Air in exchange for light duties such as cleaning the pool and sweeping the tennis court. The homeowners were film producers Ed and Mildred Lewis. Higgins moved into the chauffeur’s quarters in back. While driving the Lewis’ daughter to school, Higgins pitched an idea he’d envisioned for a 20-minute thesis film. The daughter told her mother who then advised Higgins, “Don’t write this as a short film. This is a feature, go write this as a real movie.”

When the screenplay was completed, Ed Lewis contacted Stanley Jaffe at Paramount who showed it to studio head Robert Evans. Evans thought the idea was hilarious. He optioned the script with the understanding that Higgins would direct. Paramount gave Higgins a directorial screen test but the results were terrible. They needed to find a special director who’d understand the story’s eccentric tone.

Director Norman Jewison told Evans about a young filmmaker named Hal Ashby who’d edited In the Heat of the Night for Jewison. Ashby had just one director credit, the 1970 comedy drama The Landlord. Evans offered the film to Ashby who agreed to direct only after receiving Higgins’ blessing. Ashby made Higgins a co-producer so he could watch and learn from him on set.

Ashby disliked commercial films and didn’t trust the studios. Born to a Mormon family in Ogden Utah, he grew up on a dairy farm. When he was 12, his father committed suicide. Ashby moved to Los Angeles and lived a bohemian lifestyle. He entered an editor apprentice program and befriended filmmakers like Terry Southern (screenwriter of Dr. Strangelove) and Haskell Wexler. He became a weed-smoking vegetarian with a hippie beard and long-flowing blond hair.

When pre-production began, Ashby refused to work on the Paramount lot. He set up offices in a small home in Laurel Canyon where casting sessions were held. Several actors were considered to play Harold including Richard Dreyfuss, Bob Balaban, John Savage and rock star Elton John. Bud Cort earned the role after a stellar screen test.

For the character of Maude, Ashby wanted a European actress. He traveled to London and auditioned Dame Edith Evans, Peggy Ashcroft, Lotte Lenya, Pola Negri and writer Agatha Christie (who’d never acted before). Cort suggested they contact Greta Garbo but Ashby said, “I hear she doesn’t want to work.” Peter Bart, head of production at Paramount, knew Ruth Gordon, a close friend of his mother. Bart introduced Gordon to Ashby who fell in love with the 79-year-old actress.

Higgins’ screenplay took place in Los Angeles. Ashby opted to move production to Northern California. The estate where Harold lived was found in Hillsborough. The cemetery where Harold meets Maude was in Colma, a town where dead residents outnumbered the living. The tree liberated by Maude was in Redwood City. The fair where Maude throws the “Harold loves Maude” token into the sea is on the Santa Cruz boardwalk. The final scene where Harold’s hearse plunges over a cliff was filmed at Mori Point in Pacifica.

During production, Ashby refused to return calls from Paramount. Evans sent Peter Bart to location to fire Ashby. Bart found crew members smoking weed, but he saw production was proceeding normally. Ashby kept his job. Ashby had a reputation as an actor-friendly director. He allowed performers complete freedom to experiment. During the hara-kiri scene, Cort wanted to use a yoga mat. Ashby waited two hours for someone to drive to town and purchase a yoga mat for the scene. During the swimming pool scene, Cort nearly drowned. Cort was a method actor and the suicide scenes were taxing. He constantly flipped off Vivian Pickles (the actress playing his mother) to express his character’s inner despair. Cort’s father died during production. Ruth Gordon comforted him and the two became close.

Ashby wanted a unique musical soundtrack. Evans recommended James Taylor and Elton John but Ashby had been listening to the Cat Stevens album Tea for the Tillerman. He played Stevens songs while shooting scenes and placed songs behind the dailies. He needed a song that embodied Maude’s personality. Stevens had two rough songs he’d not yet recorded: “Don’t be Shy” and “If You Want to Sing Out.” Ashby loved them both.

The Stevens soundtrack to Harold and Maude became legendary. Yet Stevens wouldn’t allow a soundtrack album to be released for 30 years since the songs were rough-cut demos and not formally produced. It took director Cameron Crowe to finally distribute a formal soundtrack in 2007 on his own Vinyl Films record label.

“If You Want To Sing Out” became the emotional core of the film. It appears three times in the movie. First, when Maude sings it, then, as the romance unfolds and finally, at the end when Harold makes his life-or-death decision.

Harold and Maude was released by Paramount on December 20, 1971, the same day The Godfather was scheduled for release. The studio didn’t know how to promote the film. Initial ads featured a blank page with the film title written in black. The reviews were awful. Variety wrote the film “was as much fun as a burning orphanage.” The film tanked. Disney’s Lady and the Tramp was number one at the box office at the time so it’s fair to say audiences preferred a love story between two spaghetti-eating cartoon dogs over one between a young boy and an old woman.

Higgins adapted the film into a novel and a stage play. He went on to write Silver Streak and direct Foul Play, 9 to 5 and The Best Little Whorehouse in Texas. Ashby became a prominent 1970s-era filmmaker directing Shampoo, The Last Detail, Coming Home, Bound for Glory and Being There. Ashby and Higgins both died in 1988. Higgins died of AIDS-related illness at 47; Ashby of pancreatic cancer at 59.