New patriarch same as the old patriarch in Taste the Blood of Dracula. 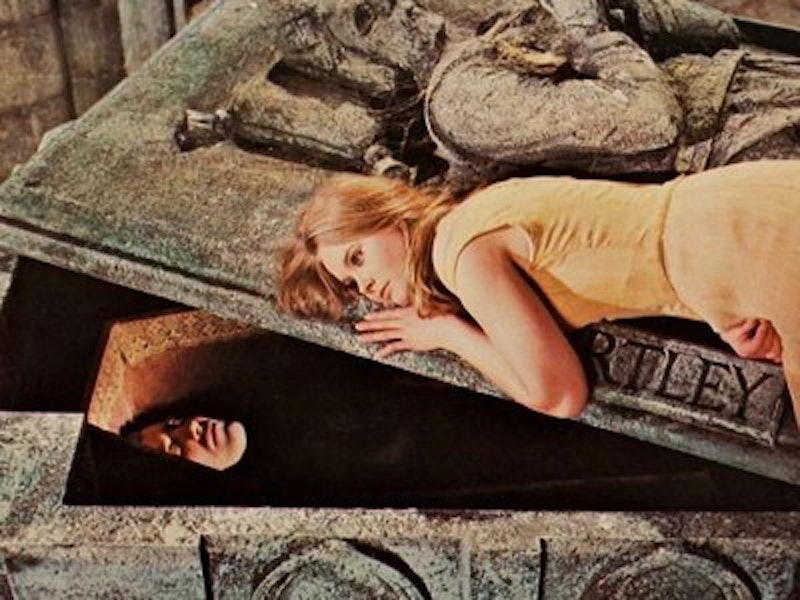 This is the fifth in a series of posts on the nine Hammer vampire films. The fourth post is here.

Time, that inexorable crimson river, flows ever onward —and as it does, the Hammer Dracula films get sexier. The first Hammer Dracula in 1958 had to make do with heaving bosoms and the heavy bite-equals-intercourse innuendo. But in the 1970 Taste the Blood of Dracula, such coyness is tossed aside, along with various garments. In the swinging 70s, you don't need vampires for sex anymore, as an early scene portrays three upstanding town patriarchs visiting a brothel, complete with an erotic dancer writhing with a phallic snake and honest-to-goodness bare breasts (at least in some cuts, I'm told.) The film is forthright about letting the viewer know that the sexy visual pleasures of the brothel-goers are meant to be sexual visual pleasures for the moviegoer, too. The brothel scene cuts back to the innocent heroine, Alice Hargood (Linda Hayden) in her room at home, conveniently in the process of getting dressed. Whether you're a virgin or less-than-a-virgin, everyone's body is on display for that trusty male gaze.

The horror genre is notorious for hypocritically framing women as sexual objects and then punishing them for daring to be sexual objects—a la Psycho. But Taste the Blood of Dracula, surprisingly, is less interested in punishing women for their 1970s sexiness than chastising the newly explicit male concupiscence. For men, attending brothels is the first step down the path to Satanism and bizarre disgusting rites, culminating in the foul and hideous deaths of loved ones and themselves at the fangs of Christopher Lee's Dracula.

The punishment of men is most dramatic in a scene that starts back again in the heroine's room. William Hargood (Geoffrey Keen), one of the upstanding brothel-goers, has started drinking heavily following the demonic ritual that left one of his colleagues dead. The alcohol’s made him even more of a controlling jerk than usual, and upon discovering his daughter has gone to a party without leave, he tells her he’s going to beat her. The sexual undercurrents are barely under; we've seen Hargood cavorting with women no older than his daughter, and he's clearly motivated by a combination of jealousy, sadism, and lust.

In terms of the film narrative, Dracula is controlling Alice, with his eyes no less. She's acting out the desires of the male gaze—which, in this case, seem to involve a masochistic wish to be punished and castrated. But you could also see the scene as a transfer of power. The film has encouraged the viewer to gaze at woman, and embrace the male viewpoint. But Dracula's eyes hand off the gaze, and viewpoint, to Alice. She picks up the male gaze and hits that disgusting male with it—and she gets to do so, moreover, without even having to take responsibility for her actions. The scene allows her to kill her vile father, without feeling guilty, since it's all Dracula's fault anyway.

Power without responsibility is a heady experience, and Alice enjoys it. Most vampire thralls seem conflicted or impassive, but Alice is jubilant; breaking into peels of maniacal laughter as she tricks her friend Lucy Paxton (Isa Blair) into Dracula's sway and helping the vampire Lucy kill her father, Mr. Paxton (Peter Sallis), another of those nefarious brothel-goers. Do better, men! Or face the consequences.

Nobody enjoys seeing men chastised and castrated quite as much as men, of course. You could see Taste the Blood of Dracula as a feminist statement… but you could also see it as a fulfillment of all the dreams of Paul Paxton (Anthony Higgins), the boring normal guy suitor. Paul isn't especially interesting or entertaining—much like the viewer of the film, perhaps. And yet, he's the one guy left standing after Alice kills her father and the other aging sybarites before finally helping Paul kill Dracula himself. All the old men desire Alice, but she chooses the young guy. The film's greater sexual detail highlights exactly what Paul wins when the old patriarchs give way to the new.

The only problem with that reading is that Alice never exactly chooses Paul. She remains gleeful about her kinky S&M relationship with Dracula ("Have I pleased you, Master?") until the end of the film, when the vampire spurns her. Per Hollywood and patriarchal tropes, Alice should choose Paul and virtue because of true love. Instead, she turns on Dracula mostly out of spite because he's dumped her. Paul's a second best choice, picked up not so much because young guys are awesome as because all the old guys, fathers and vampires, are awful. Sexual revolution or no sexual revolution, women's options aren't so great—though, in the Hammer vampire tradition, Alice at least gets to have some sexy, violent, kinky fun before she ties herself reluctantly to that tedious, patriarchal happy ending.