A Neo-Noir and a Surprise Success

On The Nice Guys and The Angry Birds Movie. 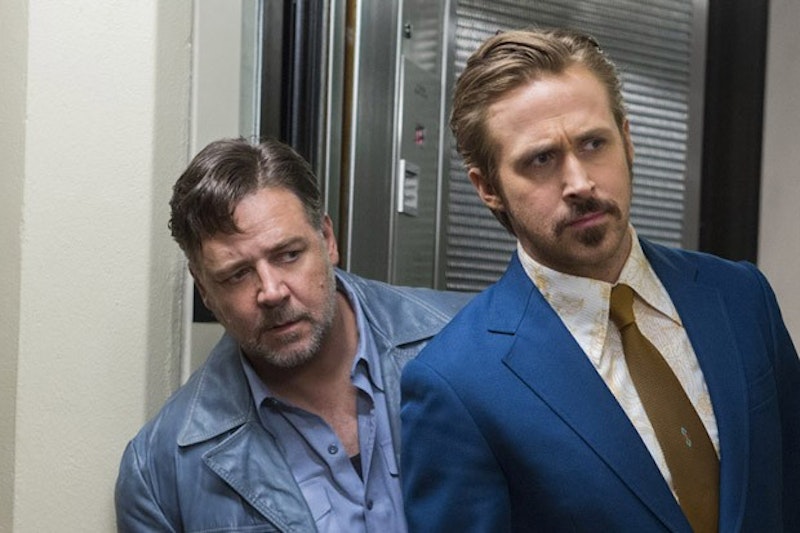 With The Nice Guys, Shane Black establishes himself as part of the upper echelon of working directors. The ace screenwriter of the 1980s already gave us the memorable Kiss Kiss Bang Bang in 2005 and one of the better comic book movies of the recent wave (2013’s Iron Man 3.) But The Nice Guys is on another level altogether—wildly entertaining and frequently hilarious.

The film, set in 1977, stars Ryan Gosling as a low-rent private eye and Russell Crowe as an enforcer, who team up to solve the mystery of a missing woman, with the plot also pulling in various hitmen (Matt Bomer, Keith David and Beau Knapp), a group of anti-smog activists and nefarious deeds involving both pornographers and the auto industry. Kim Basinger is even on hand, as “the head of the Justice Department,” in a mini-L.A. Confidential reunion with Crowe.

The plot is convoluted, although ultimately it makes sense—as opposed to Inherent Vice, which I’ve seen it five times, and was my favorite film of 2014, although I’m not sure I could explain the plot.

But the plot is not what ultimately drives the movie—what makes it go is the amazing look and feel. The clothes, the music, and the production design, it’s all perfectly 1977, especially a couple of outstanding set pieces: a Hollywood Hills house party, and an elaborate action adventure sequence at the end. The latter, I note, is filmed and staged much more coherently than just about every actual action movie you’ll see this summer.

My other favorite touch? Gosling’s character has a 12-year-old daughter (Angourie Rice) who, in an Inspector Gadget-like twist, is way smarter and a much better detective than the adults. Both leads are fantastic here. Gosling is not only hilarious but pulls off some serious pathos as a widowed single father. And among other unlikely achievements, Black manages to make Russell Crowe funny. If you saw his recent disastrous attempt at hosting Saturday Night Live, you know how unlikely that is. I had high expectations going into The Nice Guys, but there's not a single element here that disappoints.

For a cartoon movie based on a Finnish mobile phone game whose cultural heyday was about four years ago, The Angry Birds Movie is much, much better than it has any right to be. Strong animation, above-average voice acting work from a bunch of SNL veterans and even a surprisingly moving third act add up to a positive effort.

Co-directed by Disney Animation veteran Clay Kaytis and animator Fergal Reilly, the film features walking, talking, flightless versions of the familiar birds, who did nothing in the game except get tossed by slingshot at pigs. The movie’s plot features Red (voiced by Jason Sudeikis), who’s on outcast on Bird Island. When a group of evil pigs (led by Bill Hader) invade the island and steal the eggs, it’s up to the birds to rescue them—with the help, of course, of a slingshot.

The joys of the movie are the animation and the voice work from the likes of Maya Rudolph, Kate McKinnon and Josh Gad (who, as in Frozen, is always way more appealing when we only hear his voice.) Peter Dinklage also has a memorable voice cameo that builds to the movie’s biggest laugh.

The Angry Birds game’s shelf life may have passed, but credit the movie for doing something creative with a limited premise.