A Man and His Boat

On the silent pathos of All Is Lost. 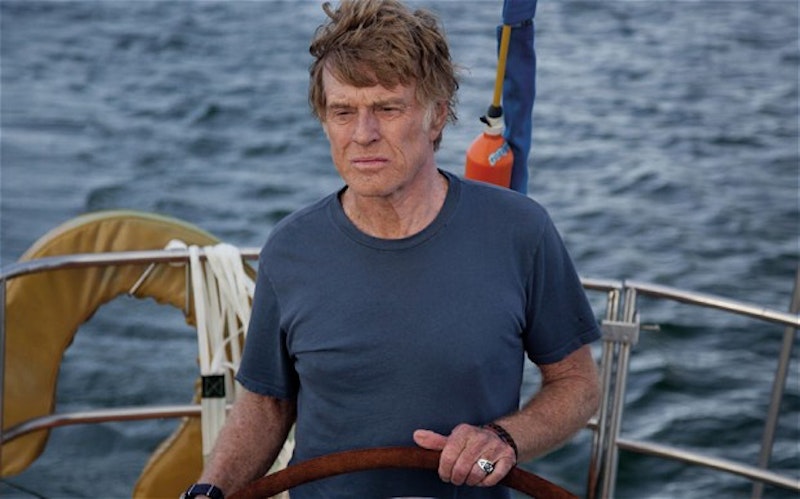 There is a telling moment, very early on in director J.C. Chandor's All Is Lost, where Our Man (Robert Redford) contemplates an errant shipping container that has made contact with his yacht. The collision bashed a hole in the side and initiated minor flooding, necessitating a great number of methodically manly maneuvers to separate hull and container. And as the container—its cargo was apparently children’s’ shoes—floats away, Our Man just stares at the thing. There are probably a thousand ways to interpret the stare, and various facets of the film as a whole, for me, it was a "really?" moment, the vaguely magical realism glare one throws out to try to somehow undo or comprehend a terrible thing that has just happened. It is, essentially, an expression of dumbfounded disbelief.

Get used to that look, because a lot of heavy shit goes down in All Is Lost, where Redford, the yacht—which, unlike its owner, is granted an actual name—and hundreds of miles of Indian Ocean co-star in what might be thought of as an exceedingly grim, 90-minute erectile dysfunction aid commercial minus women or voice-overs. After you watch it, you will never, ever want to sail in the deep ocean, but if you did, you’d want to be Our Man. You, too, would want to be calm and neutral and proactive in the face of adversity. You, too, would want to be intimately familiar with all manner of nautical/maritime protocols. You, too, would want to have the supplies to repair a major hull breach yourself. But you would not want to do all of this without any way of contacting other human beings as a result of that breach.

Or would you? Ambiguity shrouds All Is Lost. A cryptic bit of dialogue at the outset aside, we don't know why the sailor is so far away from civilization or even whether he has any interest in returning to it; he's brought books, tools, food, a ridiculous, floppy sunhat, and a sextet—he'll put this last to use. He shaves. His hair is awesome. For the first 30-40 minutes, it's like he's starring in a Ralph Lauren ad. But the thing about sailing is that there are a lot of squalls that can make life very real, and, without spoiling the intensity of the last half-hour or so, this film becomes very real, very quickly. At the point where the mostly mum Redford lets loose with a swear word, it's more earned, by a multitude of a trillion, than any blue language eruption in any other film in recent memory.

The loneliness on offer here can be crushing and communicable, and I would argue that this is a movie you should see with someone else: to squeeze a hand or just have the comfort of another's presence nearby. That this is an allegory of the human condition goes without saying, but it's also a very humanistic experience. If you're not drawn into the emotional slipstream—Redford is massive here, and has nobody to learn on or play off of—you may have no soul. Chandor concisely communicates the cramped, clammy claustrophobia of being out on the ocean—the sense of perpetual unsteadiness, the constant laying, sitting, the inescapable invasiveness of water, water, everywhere. Undercutting the desperation of these circumstances with languidly gorgeous underwater shots that highlight the beauty of nature and introducing an actual score late in the game does little to temper the mounting feeling of panic. The audience feels as tossed, toppled, and shaken as Redford does, and when I wandered out of the theater into the night, alone, it was some time until I lost my sea legs and became a landlubber again. For shame, Oscar.