And I Love Her

Spike Jonze’s Her is oddly sympathetic to its selfish and myopic characters. 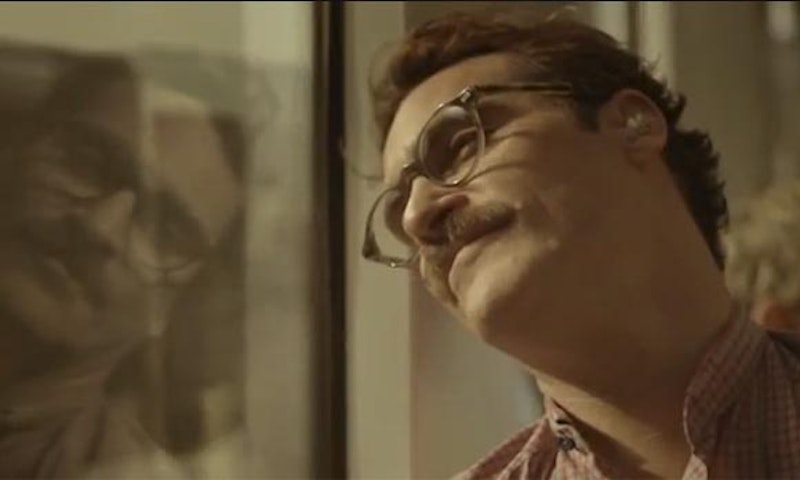 This is not Harold & Maude for Millennials. Spike Jonze’s Her is soothing, nice to look at, and pretty funny in places, but there is no love here. This movie is dead, like a car insurance commercial, and it’s cold. Be suspicious that Jonze shows great sympathy for Theodore Twombley (Joaquin Phoenix) and his meekness, selfishness and inability to open up. Twombley is a professional outsourced greeting card writer, dictating dozens and dozens of syrupy and Bronté-level love letters off the top of his head (it pays well apparently because his apartment is swank). So if you’ve seen the trailer or the poster, you know what kind of guy Phoenix is playing: a beta male, the nice guy who avoids external conflict and bottles his anger, rage, and resentment instead under a thick field of ice so that he’s “just like a big puppy dog.” He’s been separated from his wife (Rooney Mara) for over a year but has avoided signing the actual papers “because it’s nice being married.” A damaged child inside a fortysomething’s head.

I really liked the first half. It feels like an eerily vivid look into the 2020s or 2030s and beyond: things aren’t too different except it looks like Steve Jobs land (primary colors, everything is smooth and curved, further immersion into the cloud), and the way people communicate between each other is definitely disappointing, because Jonze completely cops out by validating the car commercial aesthetic of the movie by ending it totally cheeseball. Jonze’s vision of the near-future starts out dystopic but the movie is defanged, and I’m not sure where it stands. How can anyone take a romantic relationship with a computer seriously? “Samantha,” the operating system voiced by Scarlett Johansson and hesitantly purchased by Twombley, is articulate and certainly more charming and functional than Siri, but she’s not there. There are many scenes of the two talking, hanging out, fighting, even having sex, and I found myself constantly zoning out, bored by the endless string of clichés that make up their “courtship.”

The funniest and most cutting scenes are with Amy Adams’ character, apparently a professional filmmaker whose latest project is a straight Warhol rip-off: an uninterrupted eight-hour shot of her mother sleeping, which she explains: “It’s about how, you know... we spend one-third of our lives asleep, and that’s the time when we’re most free.” It gets blank stares and she gets pretty fussy, turning it off saying “no, no... it’s not right...” All the objects in Her are flawless and expertly designed, but the human relationships are fragile as glass. Adams divorces her husband of eight years because he insisted she take her shoes off in their apartment and she didn’t want to. Then he becomes a monk and takes a vow of silence for a year. Every character in this movie wants the best for themselves, even Samantha. Twombley is devastated when she tells him that she’s been communicating with other artificial intelligences in the cloud, and that she’s even fallen in love with 641 other people simultaneously since they’ve been together. So even as Samantha is absorbing all this information—talking to reconstructed dead philosophers, walking on the beach, somehow having intercourse with Twombley and perhaps hundreds of others—there’s no heart. It’s a dead, passionless cataloguing for its own sake, “gotta catch ‘em all” sort of “learning.”

Her reminded me of Dave Eggers’ The Circle, but that book was so much more ominous and unambiguous in its fear and disgust of this bloodless world we’re stumbling towards. The Circle ends with the main character jealously stroking her comatose best friend’s hair, actually resenting the fact that she can’t share and enjoy her friend’s thoughts as she lies in state. Her cops out or was misguided from the beginning: after Samantha abandons Theodore and integrates with millions of other artificial intelligences, he knocks on Amy Adams’ door, and they go up to their roof, nothing romantic—just the sort of “ISN’T LIFE INEFFABLE AND GREAT” smiling ear to ear as the orchestra swells, the sort of moment that would end, yes, a printer commercial. They’re not closer or more connected than before, and there’s no indication that either will change. In the movie’s eyes, this is okay, these are good people who have been through a lot and deserve their redemption. By doing this, Jonze validates every squirrelly wormboy in the audience instead of cutting Twombley down to size and highlighting how ridiculously self-centered and dense he is.