And an expert on vampire films. 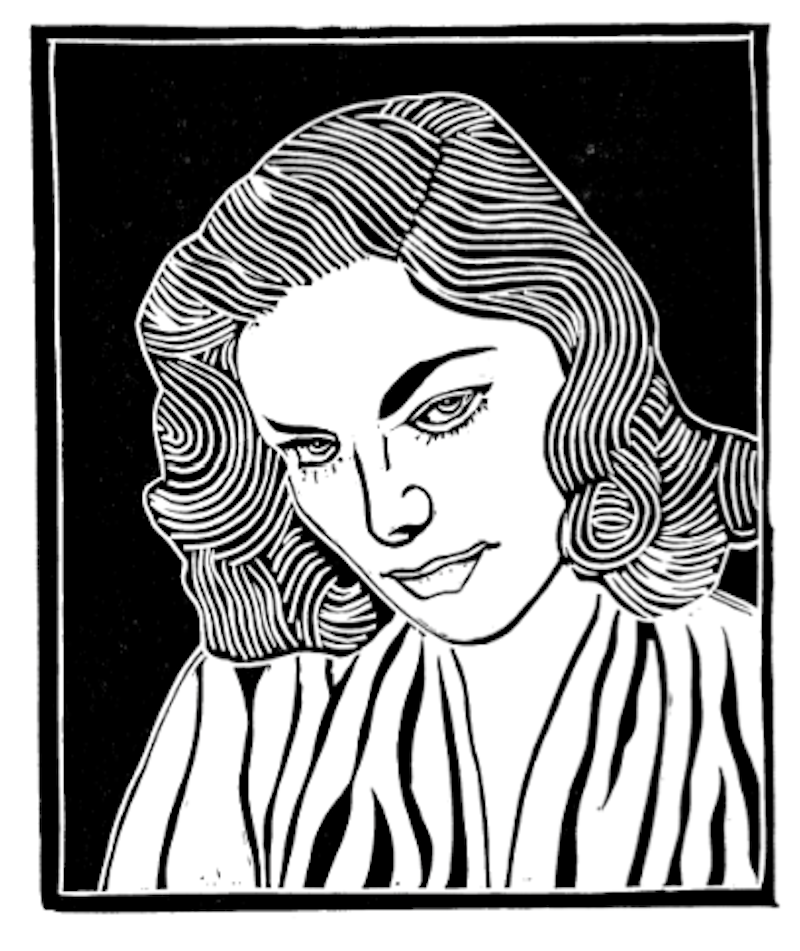 Lauren Bacall was born Betty Joan Perske in 1924 to Jewish Romanian immigrant parents. Known for her smoky voice and mysterious demeanor, she was discovered by the wife of director Howard Hawks, who saw her on the cover of Harper's Bazaar. In 1944, Hawks brought Bacall to Hollywood to audition for his film To Have And Have Not. Nervous and quivering during the screen test, Bacall pressed her chin against her chest and tilted her eyes upward. This became known as "The Look," Bacall's trademark.

Hawks gave Bacall the choice to pick between Cary Grant and Humphrey Bogart as her leading man. Bacall chose Grant but Hawks overruled her. While shooting the film, Bacall and Bogart fell in love. Bacall was 19, Bogart 44. Their romance was kept secret from Mayo Methot, Bogart’s wife, who was given to jealous rages and once stabbed Bogart with a knife.

Bacall and Bogart met in quiet cafes and dark hotel bars. It took Bogart six months to extract himself from his marriage. On one occasion, Bacall rushed from her home on a rainy night to pick up a drunken Bogart on the side of the road after he went on a binge. When Bogart’s wife learned about the affair, she confronted Bacall screaming to her, “Listen you Jewish bitch, who’s going to wash his socks? Are you?”

Bogart divorced his wife and married Bacall in 1945. They made three more classic films together: The Big Sleep, Dark Passage and Key Largo. Bacall helped Bogart quell his drinking and the couple had two children. Bacall limited her film performances to one a year as she gave priority to their marriage. “He wanted a wife. He didn’t want an actress… But I was happy being his wife. I loved it. Because I really loved him.”

In 1956, Bogart suffered a terrible coughing fit at Romanoff’s Restaurant in Beverly Hills. He was diagnosed with esophageal cancer. Bacall cared for Bogart as he endured great pain and slowly wasted away. The high point of their day was cocktail hour when an emaciated Bogart was brought downstairs in a dumbwaiter and carried to his favorite chair where he visited with close friends like Katharine Hepburn and Spencer Tracy.

Bogart died in 1957, and Bacall was devastated. At his funeral, Bacall put a whistle in his casket, a nod to her famous line from To Have and Have Not: "You know how to whistle, don't you? You just put your lips together and blow."

In 1957, Bacall had a short relationship with Frank Sinatra and later married actor Jason Robards (who resembled Bogart). Bacall's career waned in the 60s though she was nominated for a Best Actress Academy Award for The Mirror Has Two Faces. In 1972, she appeared in John Wayne's last movie The Shootist. Despite their opposite political outlooks (Bacall was liberal, Wayne conservative), the two became great friends. In 2006, Bacall made a memorable appearance in The Sopranos. In the episode she is robbed and beaten up and she utters two classic F-Bombs.

Bacall is first cousin to Shimon Peres, the former Prime Minister of Israel. She remains healthy, active and opinionated at age 89. Recently she said of the popular movie Twilight: "Yes I saw it, my granddaughter made me watch it, she said it was the greatest vampire film ever. After the 'film' was over, I wanted to smack her across her head with my shoe but I do not want a book called Grannie Dearest written about me when I die. So instead I gave her a DVD of Murnau's 1922 masterpiece Nosferatu and told her, 'Now that's a vampire film!'"