What Ingmar Bergman can tell us. 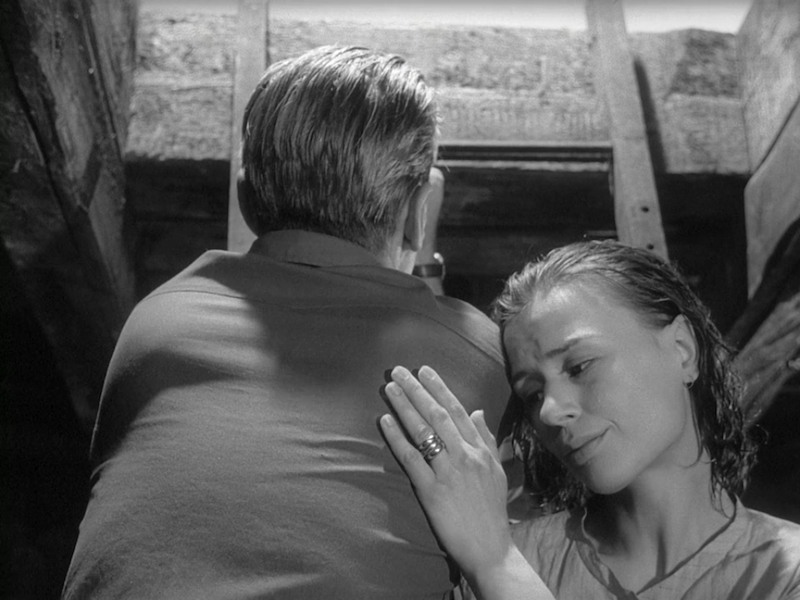 Today’s society may tell us that everything we do and encounter is fluid and that God’s nothing more than a quaint concept. People only seek transient comfort, even in their religion. The questions of faith and doubt are no longer “facts of life,” accepted parts of the public square, and they’ve been relegated into old and dusty books. The softness of faith (and life in general) was never in Ingmar Bergman’s mind. Instead of choosing the easiest route, Bergman always took a path that led from one philosophical question to the next, each one more complex than the other.

Although question of God is implicitly present in most of his films, it is in his trilogy, which is composed of Through a Glass Darkly (1961), Winter Light (1963), and Silence (also 1963), that Bergman explores the presence and absence of God in our lives. Here we'll look at the first film in that trilogy, Through a Glass Darkly.

The film is a meditation on madness and individual consciousness. It takes place on a remote island with four characters: David (father), Karin (daughter), Minus (Karin’s younger brother), and Martin (Karin’s husband). Fairly early, we learn that Karin suffers from some type of mental illness (most likely, schizophrenia), and the question that continuously hangs in the air is whether her condition will improve or whether she’ll have to be hospitalized.

David’s been a neglectful father. He fancies himself a writer, a true artist, but his books are overly sentimental and filled mostly with clichés. He chooses to travel in order to gather more experiences and material but the price of that choice is high—his children feel that they’re unable to authentically communicate with him.

In the midst of this tension, Martin’s trying to hold everything together, especially in his attempts to become the anchor for Karin, who’s descending further into darkness. David refuses to see this harsh reality and constantly evades responsibility as a father. Instead, he selfishly records Karin’s experiences in order to gather more material for a novel. He’s a detached creature—removed from his children and life itself.

Minus, who’s finding his own way in this muddled dream-like state imposed by Karin, is both naive and angry. He expresses his sexuality through the pornographic magazines he looks at, and is rendered even more confused when Karin forces herself on him and commits the worst of family crimes—incest.

Morality is not part of this strange family, and even Martin, who sees the inevitability of the coming chaos, is more medically and psychological oriented than existentially and theologically. And yet, without ever telling us, Bergman shows the great themes of Christian faith.

Despite the fact that Karin’s suffering from a medically categorized illness, her madness is relatable. This is why the film functions on two levels: psychologically (dealing with family relations) and theologically (dealing with an individual’s relation to God). Karin may see God as an ugly and frightening spider who’s trying to penetrate her, but even this bizarre experience with faith reveals a mystical quality about Karin’s desire to know God and to unite with him.

David, Martin, and Minus are not mad in the clinical sense but each one of them has a distant and remote relationship with God. They’re desperately seeking to communicate with each other but the entirety of their being is stuck in an in-between state unable to make concrete decisions, especially the ones about the possibility of knowing God. What binds them together, paradoxically and hopelessly, is Karin’s madness.

And yet, as the three men try to relate to Karin and her chaotic consciousness, they’re moving toward God. Their only connection to God the Father is Karin, who’s the conduit or a spiritual vessel. But since Karin’s visions are unreliable, their knowledge of God will not only be limiting but also devoid of meaning. They do know, however, that part of the human condition is the journeying from one reality to the next, and at some point, we have to make a choice which reality we wish to be part of. Karin realizes this at the end, when she willingly packs her suitcase and is whisked off by a helicopter to the hospital where, we assume, she’ll stay indefinitely.

What is God? Who is God? Can we have hope in the midst of suffering? Minus desperately asks his father to show him the proof that God exists. David’s not sure but he does equate God with love. Minus is not satisfied with this response and wants to know what kind of love. “All kinds of love,” says his father.

As they stand against the window, boundlessness of the sea behind them, it seems that for the moment, the burden of being has been lifted. Surprisingly, the final words in the film come from Minus: “Papa spoke to me.”

He’s recognized. By asking questions about God’s absence and presence and the fact that David heard his interior cries, Minus feels that he exists and that perhaps hope also exists. The most obvious allusion to this moment of spiritual discernment is that Minus’ implicit and awkward prayer has been heard by God the Father Himself. Faith, which is both spiritual and incarnated, has solidified itself for Minus. The welcome reality of Papa’s love has caused him to pause the disordered existence and emerge out of darkness into the light. For a brief moment, God has spoken back.