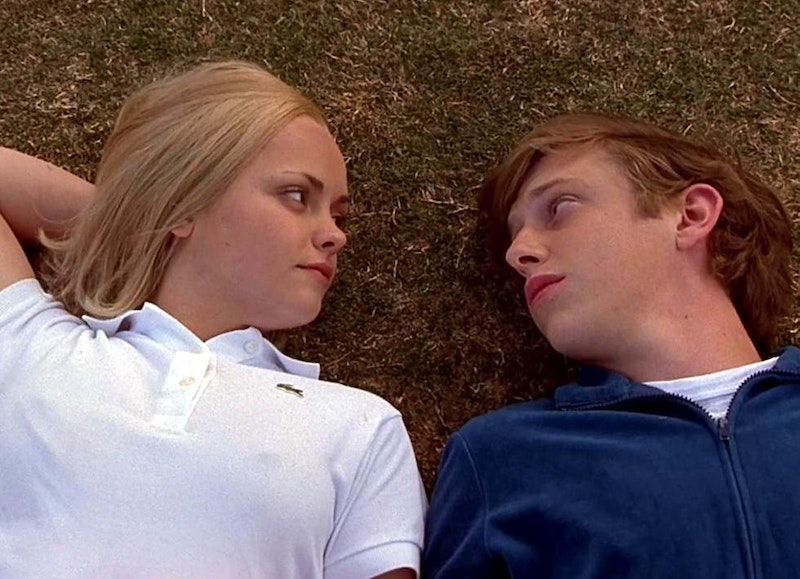 I’m writing about this movie from 2002 called Pumpkin, but you should probably just watch it blind while you still can. Go in knowing nothing and come back to join in on the bewilderment, because I wish I could’ve seen this movie without any preconceptions about what it was. My brother found it by looking through Marisa Coughlan’s filmography, an actress that had a real run at the end of the 1990s and into the aughts with Gossip, Freddy Got Fingered, Super Troopers, and Pumpkin.

Christina Ricci stars, but other incidental familiar faces show up, like Phil Reeves (the principal in Election), pre-fame Melissa McCarthy and Amy Adams (who made her film debut in the forgotten but very good and very bleak Drop Dead Gorgeous). Pumpkin is a movie that never could be made today, and probably never could’ve been made in any other time than the high-flying pre-9/11 millennium. Heathers is dark, so is Election. Drop Dead Gorgeous takes a step forward, more mean, more nihilistic. But Pumpkin is beyond categorization, beyond good or bad taste, beyond anything we’d recognize today as “dark humor.” Everyone deserves a movie-watching experience as wildly disorienting as Pumpkin.

Ricci plays Carolyn McDuffy, a sorority sister in an anonymous “everywhere” American town. Like a lot of these late-'90s, early-aughts teen movies, there’s expected decadence of binge drinking mixed with a bizarre tendency to infantilize the characters to the point of absurdity (like the clueless high school seniors in American Pie who’ve never had sex but lack a basic understanding of human—not even female—anatomy; or Chester and Jesse in Dude, Where’s My Car?, who got “so wasted” the night before, live by themselves, yet they’ve been dating the same girls for over a year without ever having sex).

In Pumpkin, the characters are in college, but they all live with their parents, who appear to live in their mansions on campus with them. There’s a competition between sororities for some honor or trophy, and Ricci and her sorority mates are dead-set on winning. So they offer to mentor a group of mentally disabled young men from a neighboring school. Marisa Coughlan’s character freaks out and can’t handle the sight of the kids when they get off the bus, handicapped but obviously hurt by her extreme revulsion. Ricci’s character is assigned a guy named Pumpkin, and although at first she’s just as apprehension as her sorority sisters, she eventually falls in love with Pumpkin, and her love somehow gradually cures his disability: he’s able to walk, talk, and throw discus with her.

Pumpkin is wildly offensive and fucking insane. If you can stomach the nonstop jokes at the expense of the disabled, it’s a fascinating movie, not only because it makes Heathers look like Dawson’s Creek, but it has an overtly Lynchian atmosphere and surrealism. Honestly, it’d make a good double feature with Twin Peaks: Fire Walk With Me, considering how much time is spent with the beautiful people in their beautiful homes wallowing in misery and trauma. Sexual pathologies play out in both, and though Pumpkin lacks any of the nuance of empathy of Lynch’s most twisted work, it’s a forgotten masterpiece of tonal masochism, a spiteful and hateful movie that has the same skeptical eye pointed at the evil lurking within the homes of suburban America. Ultimately, it’s a redemptive love story about two people who want to be together that the world around them will not allow. When Pumpkin’s mother walks in on him and Ricci in bed post-coitus, she screams “YOU JUST RAPED MY SON!” and all Ricci can say is “It was consensual.”

I don’t see any difference between this kind of love story and Douglas Sirk’s All That Heaven Allows, or Rainer Werner Fassbinder’s homage to that movie, Ali: Fear Eats the Soul. At the center of all three films are two people from opposite ends of the cultural, racial, and intellectual spectrums who fall for each other nonetheless, and the ensuing chaos it causes in their respective communities.

I’m sure everyone involved but writer/director Adam Larson Broder would like to forget that Pumpkin even exists, but here it is, an article on the Internet imploring you to watch this absolutely bonkers movie with no parallel. Nothing comes close to its mix of nihilism, mean-spirited humor, and familiar romantic pathos. I know it’s cool now to rep Fire Walk With Me as a dive into the dark heart of incest and domestic abuse, and that’s all earned. Maybe one day the Criterion Collection will reissue Pumpkin as they did with Election last year, and then you’ll be safe to watch something completely insane and absurd, a controlled demolition of a movie. Amy Adams, Melissa McCarthy, Christina Ricci… I’m sorry. But it’s out there now. Go watch Pumpkin and scream at me on Twitter. I’ll be waiting.