Woman in Gold is further evidence of the decline in American cinema. 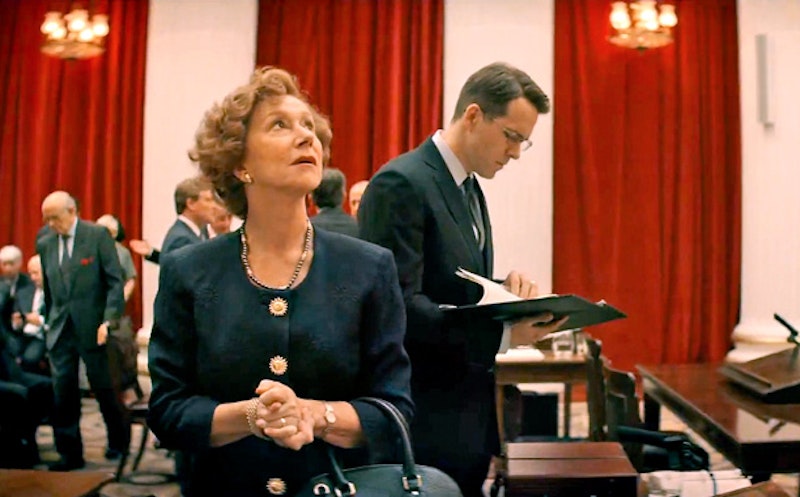 Woman in Gold is yet another example of the slow decline in the quality of American films, handicapped by hemorrhaging home video sales and the collapse of all media industries. Even staffed with A-list actors like Helen Mirren and Ryan Reynolds, you can’t do much with a crummy screenplay, especially now that responsibility is so dispersed and everything is played so close to the chest. Woman of Gold follows the true story it’s based on closely, but the garbage bin three-act structure it’s pushed into like rotten Play-Doh makes it an embarrassing exercise for all involved. Helen Mirren is up there in rarefied air with Daniel Day-Lewis, and her performance is somehow still extraordinary and pretty funny, and it’s fun to watch Reynolds play a different sort of comic character, who looks like the kind of dead-eyed geeky dweeb lawyer who would store body parts in his cellar in another movie. But the script is asylum meat.

This is the movie to watch sinking into a bed after traveling for 16 hours. Infotainment. Maria Altmann (Mirren), an Austrian ex-pat exiled during World War II, crosses paths with plucky lawyer Randol Schoenberg, grandson of composer Arnold Schoenberg. Gustav Klimt’s famous painting of Altmann’s aunt Adele, in addition to four other works, were seized by the Nazis from Altmann’s home during the war, and remained on public display in Austria ever since. Schoenberg convinces a reluctant Altmann to travel to Austria and serve the government a subpoena. He represents Altmann in a six-year legal battle against the Austrian government that ends up before the Supreme Court. They get the paintings back, encountering every clichéd and hackneyed device to tease, thwart, and eventually succeed in less than two hours. There’s the firm boss that hires a flustered Schoenberg and chastises him as the case drags on, the lumpy Austrian representative that’s trying to keep the paintings for the glory of his country, a couple of points where Altmann loses her motivation and resolve to continue, and Schoenberg’s unwavering and unexplained commitment to this unlikely case (unexplained in the movie at least—Schoenberg made $120 million in commission on the case in real life).

The raw material is better suited for a documentary. Why make a slightly better version of the Barbra Streisand and Seth Rogen movie Guilt Trip with buddy comedy tropes and robotically delivered expository dialogue instead of something to loop on HBO? But that’s not going to make as much money, even if this movie bombs critically and commercially. It’s rice pudding that’ll go over well internationally and in rotation on cable in perpetuity, and it’s nice to watch Reynolds and Mirren interact; they do the best they can with what they’re given. But now Altmann and Schoenberg’s story has been blown on a crap movie that’ll make its money back and do okay. A safe and very boring bet.