All the kings are dead. 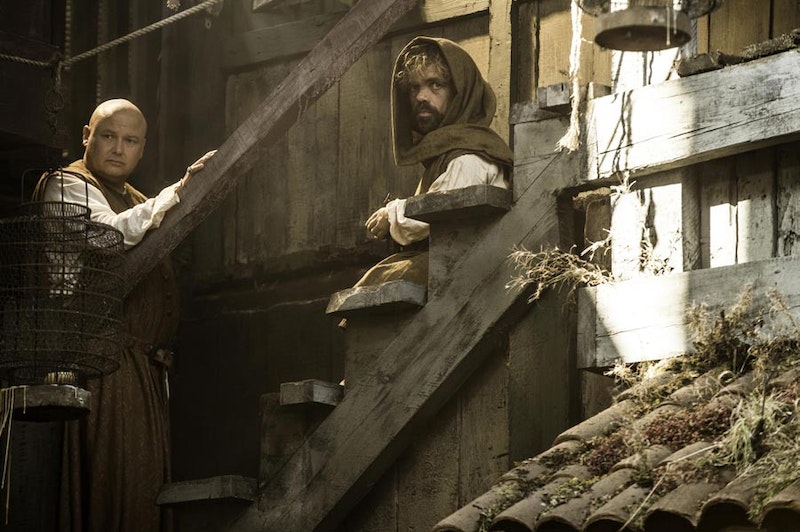 The fifth season of Game of Thrones opens with something the show has never done before, a flashback. Young Cersei is visiting a witch in the woods near Casterly Rock. She demands to know about her future, and learns early on the grim hardships to come: that she’ll be Queen for a time, but will be usurped by another, “younger, more beautiful.” “Will the king and I have children?” she asks. “No,” the witch tells her. “The king will have 20 children and you will have three… Gold will be their crowns, gold their shrouds.”

It’s an odd scene. With the exception of maybe Roose Bolton or Walder Frey, neither of whom show up in the season premiere, Cersei is surely the show’s most hated character, and this flashback doesn’t do anything to make her more likable. We’re all still waiting for her to get what’s coming.

Cut back to present day King’s Landing and lords and ladies from across the Seven Kingdoms have assembled for Tywin Lannister’s funeral. Cersei and Jaime stand over their father’s body just as they did after Geoffrey was poisoned. But the mood is different now. There will be no rapey sex scenes here. Jaime warns about their enemies, but Cersei can only think of revenge.

Meanwhile, Tyrion and Varys make it to Pentos. Varys is on his way to find Daenerys, convinced that all the political machinations since The Mad King’s death has left the Seven Kingdoms far worse off than it was before. As he tells Tyrion: “The Seven Kingdoms need someone stronger than Tommen, but gentler than Stannis. A monarch who can intimidate the high lords and inspire the people. A ruler loved by millions with a powerful army and the right family name.” A wary, wine-drunk Tyrion counters: “The future is shit, just like the past.”

If the first four seasons of GoT were about warring families (Baratheons, Lannisters, Starks) all looking to be crowned king, season five is far more vague. Yes, the Lannisters still rule, but with Geoffrey and Tywin dead, and with Margaery Tyrell plotting, and Stannis still rallying troops, and Daenerys looking to cross the Narrow Sea with her dragons and Unsullied, nothing is settled. Varys talks about “the war to come,” and effectively the wars of the first four seasons have meant nothing: The warring families have been brought down, that’s about all.

Stannis doesn’t even have enough of an army to retake Winterfell, let alone conquer the Seven Kingdoms. At Castle Black he enlists Jon Snow to try and convince Mance Rayder and his army of wildlings to join him, but Rayder refuses, and is burned alive—yet another dead king. Meanwhile, Daenerys can’t control her dragons, and learns how he easy it is to free slaves but how hard it is to rule, so she stays in Meereen because Trader’s Bay threatens all out civil war without her.

It’s a fine start for season five. GoT openers are always more about character situating than anything else. Noticeably absent, however, is Arya, who from next week’s preview we learn makes it to Braavos. Also Bran and Hodor, who won’t be in season five at all. Sansa and Littlefinger rule the Eyrie, and have left poor idiot Robin at some sort of country refuge, though it’s unclear what either one of them wants next. Brienne and Podrick are still on the lookout for Sansa, and judging by how narrowly they miss her, I can only assume a run-in won’t be long.