The Constant Action in Furious 7 Masks Its Blatant Sexism

A torturous summary of an awful film. 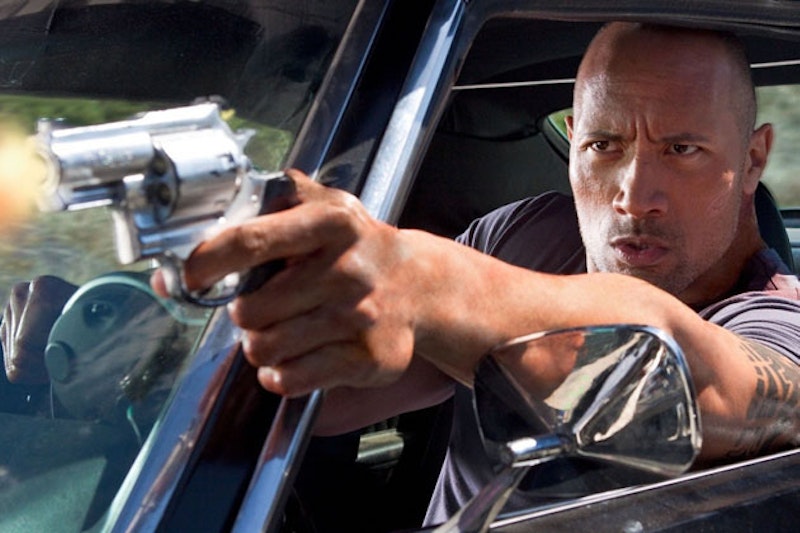 Too busy to see Furious 7, but still want to seem hip and in-the-know? Worried that Darren and Mark will make fun of you for missing out on the movie of the year? Don’t worry: instead of sending a passive aggressive complaint to HR and then destroying a couple voodoo dolls in the privacy of your one-bedroom condo, just read my summary. I promise it’s accurate.

So it all starts with Jason Statham beside a hospital bed, talking to his dying brother, saying stuff like, “Man, you were a real loser when we were kids. I always had to fix your mistakes and finish all the fights you started, and I never really liked you in the first place.” And I’m in the theater thinking, dude, give the kid a break, he’s dying, after all. You’re not being a very good brother right now, Jason Statham. Anyways, then he’s all like, “I’m gonna kill Vin Diesel for you, because I want the audience to know that I solve my problems with violence.” Right after that, this S.W.A.T. dude pops up out of nowhere, but my boy Jason shoots him in the face. Or something like that. The point is: this is a high security hospital, and visiting hours are clearly over. So, naturally, Jason Statham kills everyone and then blows up the building.

Cut to The Rock checking his email, shifting around some files, making small talk with his co-worker. Regular office stuff. His co-worker’s all like, “You need a break, you spend too much time working!” But that’s obviously not true, because it’s clear he spends all his time in the gym. Then Jason Statham pops up and is all like “Hey, The Rock, I’m a big fan. Loved you in Tooth Fairy. Psych! You suck.” Then they fight for 15 minutes. Sometime in between, Jason Statham comments on The Rock’s insane biceps, and The Rock blushes a little, and is all like, “Bro, it’s just dedication. That’s all. Willpower, my man. And quinoa. Lots of quinoa. Did you know it’s got all nine essential amino acids?” Jason Statham, mid-way through a roundhouse-kick-to-the-temple, says, “I love quinoa. Do you eat almond butter?”

My boy Jason eventually throws The Rock out of a window. Does he have superpowers? The implication is yes.

Jump to Vin Diesel and Michelle Rodriguez at a drag race, and they’re all sad because the latter has amnesia. This is where director James Wan really shines—see, he juxtaposes the moroseness of his characters with the near-bacchanalian setting of the drag race, causing the viewer to experience the same confliction that must be consuming the two of them. In fact, confliction is a pervasive theme throughout the film: how can the filmmakers justify honoring Paul Walker with a movie that romanticizes the sport that killed him? How can the audience praise this franchise for being ethnically diverse but fail to call out its blatant sexism? I couldn’t find answers to these questions in the theater, which just shows why Furious 7 merits multiple viewings.

Okay, back to the drag race. Actually… not much happens in this scene. There’s a bunch of half-naked women. That’s about it.

Jordana Brewster (who is she?) and Paul Walker help Vin Diesel move into his new house, but then this strange package from Tokyo explodes and blows up everything. Of course, no one gets hurt. Then Jason Statham drives up next to what used to be Vin Diesel’s house, flashing both of his middle fingers, and is like “Ha! Suck it, fools!” Vin Diesel (understandably) gets pissed off and drives after Jason Statham. I have to pee, so I miss the rest of this part. I consider grabbing some Swedish Fish on my way back from the bathroom, but then imagine The Rock lecturing me about only eating glucose post-workout, so I decide to pass.

Anyways, when I come back, Vin Diesel’s talking to some CIA dude about a program that can find anyone at any time. To be honest, the science sounds a little murky, but whatever. “I can’t let you use this technology until you find this hacker named Ramsey,” the CIA dude says. “She’s been kidnapped and is trapped in this expensive-looking RV, which, duh, is traveling up a remote road on this gigantic mountain.”

Vin Diesel’s like “Game on!” and then Ludacris is like “I’ve got a plan. We’ll put our cars in a plane, hop in the cars, and then drive out of the plane. With parachutes. This will definitely work.”

It does. After 30 minutes of bullets and punches, they rescue Ramsey, who, of course, is not only one of the greatest hackers in the world, but also a model. Then they go to Abu Dhabi, mainly because it’s incredibly profitable to film there.

So all our protagonists are chilling by the beach, just relaxing, you know? Then the gorgeous hacker changes into a bikini and is like, “I know I’ve just escaped kidnapping and nearly been killed four times in the last 12 hours, but I could really go for a swim right now.” Naturally, everyone says, “Do your thing, girl. This isn’t weird at all.”

Of course, Tyrese Gibson, that clown, starts mentally undressing our gorgeous hacker, making various sexist comments along the way. “Man, I love those titties!” he says, and then Ludacris chimes in, “What is it with you heteronormative cisgendered males that makes you think you can comment on another person’s body like that?”

So then they all go to this rich dude’s house, crash his party, and steal his car. They’re all celebrating, like “Woo-hoo, we did it!” and I’m not entirely sure what’s going on, and then Jason Statham shows up and starts shooting people. Vin Diesel’s like “Oh no!” and I’m like, “Yo, Elie, is there any popcorn left?” And then he hands me the popcorn bag, but it’s mostly just un-popped kernels and butter.

When I look up at the screen they’re back in L.A., and now there’s a second bad guy, this mercenary named Jakande. He has this big honkin’ helicopter with about 2000 guns attached to it. He dies pretty quickly. There’re a couple of car crashes, a few fistfights, nothing too strange. Eventually Jason Statham and Vin Diesel are on the roof of a parking lot, and Vin Diesel’s all pissed because Jason Statham killed his friend. Jason Statham sticks out his tongue and is like “Boo-hoo, what are you gonna do about it?” And then Vin Diesel goes Super Saiyan and knocks Jason Statham unconscious.

All the protagonists get together and are like “Well, I’m glad that worked out. Let’s go to the beach and make a painfully obvious metaphor about Paul Walker being in a better place now.”