Dark details from the sinister series. 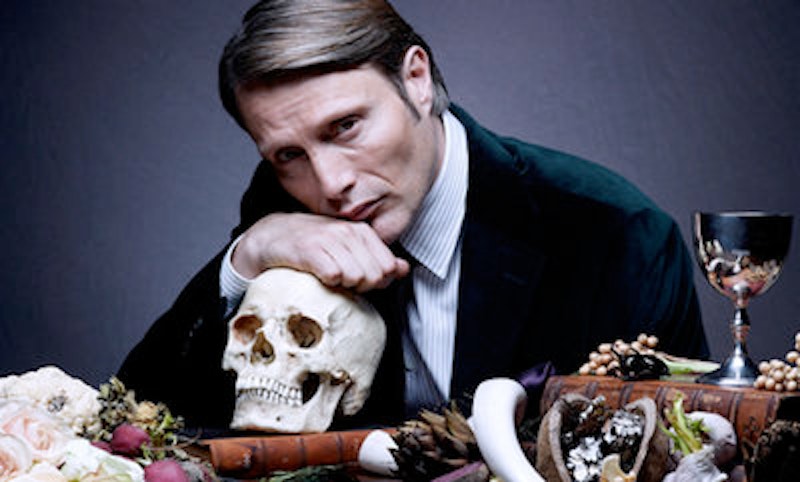 S3E01—“Anytizers”: Lecter and Will reconcile and resume therapy, this time with a twist: Will is under the influence of another, different serial killer psychiatrist, a deranged murderer known as “Captain Crunch.” Dr. Bloom and the pathologists meet at a Caribou Coffee and discover that they all go to the same dentist, who’s a serial killer. In the final scene, Lecter frowns while painting in the Japanese sumi-e style; shockingly, his brush is made from a victim’s gall bladder.

S3E02—“Hospitaliano”: The FBI finds Captain Crunch’s latest victim, a white male who died from exsanguination through the roof of the mouth. Will and Lecter slowly ask one another questions in a moodily-lit room then move to another moodily-lit room and ask the same questions in reverse order. Jack and Abigail come into conflict when they have to share a hospital bathroom. Lecter reads Infinite Jest on a city bus while eating beef jerky with a gruesome twist: he shoplifted it from Wegman’s.

S3E03—“Big Beef Mexi-Melt”: Will sees a darker side of Lecter when he (Lecter) loses his composure after being given a 3/10 on the passage portion of a dressage test. Dr. Bloom realizes that one of Will’s dogs is actually a serial killer in disguise. Will asks Lecter if he’d ever consider killing a professional golfer—after a chilling pause, Lecter responds, “Would you ever consider killing a professional golfer?” Jack and Abigail bond over the rude service they receive at the hospital Dunkin Donuts. Lecter reveals to Will and Dr. Bloom that he’s read Ford Madox Ford’s magnum opus Parade’s End but that he hasn’t seen the HBO/BBC television version starring Benedict Cumberbatch.

S3E04—“Pizza Any Time”: While investigating Captain Crunch’s latest homicide Will realizes that Crunch sees his victims as soggy, shapeless creatures. Lecter murders an impudent Juilliard student who mistakes a viola da gamba for a cello. Jack realizes that Abigail looks familiar but can’t remember exactly whom she is—maybe the girl with the horrible skin condition who exploded in a hospital? Or Molly Shannon? He isn’t sure, but he’s sure of something else: he’s close to finally getting enough evidence to put Lecter away. “If I could just personally witness one or two more stabbings I would have what I need to nail this bastard,” he tells Miranda from Sex and the City. Meanwhile, Lecter dispenses deadly advice on an Internet discussion group about Windsor chairs.

S3E05—“Bloomin’ Onion”: Lecter and Du Maurier drink Orangina after a grass-court tennis match; Lecter whispers to her, “In all honesty I prefer Canguilhem to Foucault.” In a flashback we see Lecter in the 1970s, riding a European-style road bicycle before they caught on in the United States. Will sees a speech pathologist to deal with his extreme slow-talking, then falls under the speech pathologist’s influence. Mason Verger re-emerges with a grisly new plan: to take over the bootleg trade in Atlantic City.

S3E06—“Pinxtos”: The episode follows a complete jai-alai match between Lecter, Will, evil antler Lecter, and Scott Thompson as Buddy Cole.

S3E07—“Bomb Dot Com”: Captain Crunch taunts the team by murdering the entire FBI cadet class at their graduation. Dr. Bloom has a horrifying experience at Ikea. Lecter and Will get into an increasingly petulant argument over whether lute courses should be tuned in octaves or in unison. Jack reviews a videotape of Lecter murdering an entire family using his driver’s license as a weapon, but doesn’t feel that it’s time to move yet. Will falls under the influence of the Verizon store.

S3E08—“Dunkaroo”: Lecter unveils his latest masterpiece: an egg tempera painting on a wooden panel in the style of Fabriano, but with some human heads glued to it. Will and Dr. Bloom accidentally kiss when they both try to eat the same noodle. Margot Verger enrolls in a sinister Pilates class. Captain Crunch kidnaps the Boston Celtics. Dr. Du Maurier contemplates moving to Ireland, telling Lecter, “At least there will be fewer handsome serial killers there, I assume.” In the ending montage Lecter buys a clavichord through Craigslist while Will fishes in what is later revealed to be a horse trough at Colonial Williamsburg. (Guest star: Jeremy Piven).

S3E09—“Dump Cake”: Dr. Bloom submits an article to Cracked. Lecter creates a Facebook profile only to send Farmville invitations to everyone he knows—“I wanted to see what would happen.” Will falls under the influence of one of his dogs and must ask insane serial killer The Death Whisperer (guest star Cesar Milan) for help. Jack tries to get the pathologists to go with him to a Nick Cave concert and is disappointed when they all flake out. Unknowingly, he sells his extra tickets to Captain Crunch, who has a sinister plan.

S3E10—“Cream of Some Young Guy”: Lecter backs over Captain Crunch in his driveway, killing him instantly. Dr. Bloom and Will can’t find anything they like enough to buy at Forever 21. Will almost falls under the influence of Auntie Anne’s Pretzels but Dr. Bloom saves him at the last minute by jingling her keys in his face. Lecter mentions that the French horn is “not that hard to play.”

S3E11—“Cheddar Bay”: Will has a dream that he had to go back to college and take calculus, but that he’s completely forgotten to attend classes and will likely fail. Unable to return to sleep he watches old episodes of The Following on his DVR and falls under the influence of fictional cult leader Joe Carroll (James Purefoy). Lecter reads Granta while sitting on a hand-made joggling board that probably has human bones in it. Jack watches a surveillance video of Lecter putting a whole fish in his mouth and then pulling out the skeleton, which makes a sound sort of like a xylophone—“What does it all mean?” he asks Will.

S3E12—“BONE Appetit, Pt. 1”: The net begins to tighten on Lecter, who has accidentally left a notarized document detailing all his crimes in Jack’s bathroom. Will and Lecter share their slowest conversation yet, in a 20-minute scene during which Will asks Lecter if he believes that “the face is the window of the head.” Dr. Bloom tells Jack that Will is getting “too close,” though she can’t quite put her finger on what he’s getting too close to. “Maybe you’re too close,” Jack tells her. Mason Verger attempts to order groceries using Peapod and becomes frustrated, flinging his iPad across the room. From the shadows Lecter smirks, leaving behind his grisly calling card: a fine example of whalebone scrimshaw in the New Bedford style.

S3E13—“BONE Appetit, Pt. 2”: Lecter escapes from the FBI by crouching behind his center island. Dr. Bloom and the pathologist who isn’t Scott Thompson finally kiss. Will falls under the influence of Jeff Van Vonderen. Jack finds Lecter’s final taunt: a Post-It note reading “U STUPID.”