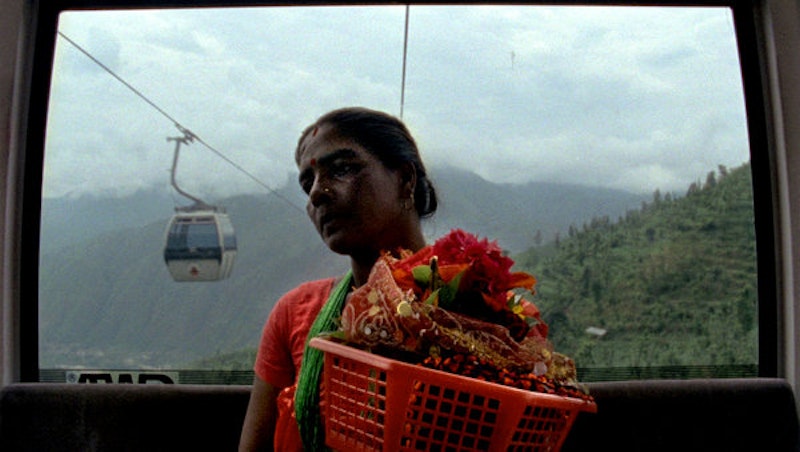 Manakamana is uneventful by most cinematic standards; the picture—whether you want to think of it as a “film” or a “documentary” is mostly a matter of semantics—consists of nearly two hours of people taking cable-car rides, across a sprawling valley in Nepal, to and from the Hindu temple of the title. The filmmakers unobtrusively shoot from one side of the cable car, while a steady stream of passengers file in and out.

It takes a while to recognize how perilously elevated these folks are, plus they’re already in the damn mountains—how the car glides them up, up, up and down, down, down, towering over foothills and towns where people yell at them, even as birds scream by. The point where the fantastical nature of this hits you is roughly when characters start complaining about how their ears are popping.

There’s a lush dreaminess to the mountains of Nepal that’s narcotic, even from the far side of the camera lens. I don’t have a “bucket list” at this point, but wasting a day riding back and forth on this particular cable car would be at or close to the top.

If any tension is present, it lies in the characters’ relation to the camera and the journey—it’s unclear how much of what we see is acting and how much is a natural reaction. In two particular instances, women travel alone, each with a basket of flowers. The first woman silently cycles through a series of expressions that convey sadness, exhaustion, excitement, ecstasy; I like to think that the flowers, from a suitor perhaps, had some bearing there. The second woman shyly addresses the camera, and is clearly uncomfortable with the shifts and bumps of the ride.

When each ride ends, the cable car glides into the gloom of a station which transforms the riders into shadows and then casts a pall of darkness so deep that it feels obliterative—and probably simplified the editing process for the directors.

Watching Manakamana, you’ll be tempted more than once to cheat a little, tune out, surf the web on your phone, play a game or make a cat’s cradle. Don’t do this. Turn off the lights and let the movie own you for a while.

On one trip, the passengers are all goats; they freak out a little, but overall, handle the experience okay.

In some ways Manakamana is a meditation on time; online responses tend to be variations on “interesting, but I’ll never willingly watch this again.” A theater viewing would be preferable to my laptop, but I’d be happy to revisit. Some months back, when Marc Maron appeared on the Bret Easton Ellis podcast, the comedian posited a reason for the unexpected success of his podcast, WTF: an animated conversation cuts through the hyper-real, information overload that is modern life. “It slows shit down,” as Maron put it. Manakamana operates on a similar principle, calming the pulse and turning down the noise. All of a sudden you’re watching total strangers, relaxed, living their lives; in some ways it’s like watching other people on a bus or a train, or considering the bored expressions everyone wears when driving. The drastic plummet in stimuli forces us to assign narratives to what we’re seeing. Who are these people? What are their lives like? The cable car rides where riders converse seem to end the fastest, and we’re left longing for greater understanding; the silent rides offer longer puzzles about these strangers, to make sense of whoever they are.