Unfortunately, Popstar plays it too safe. 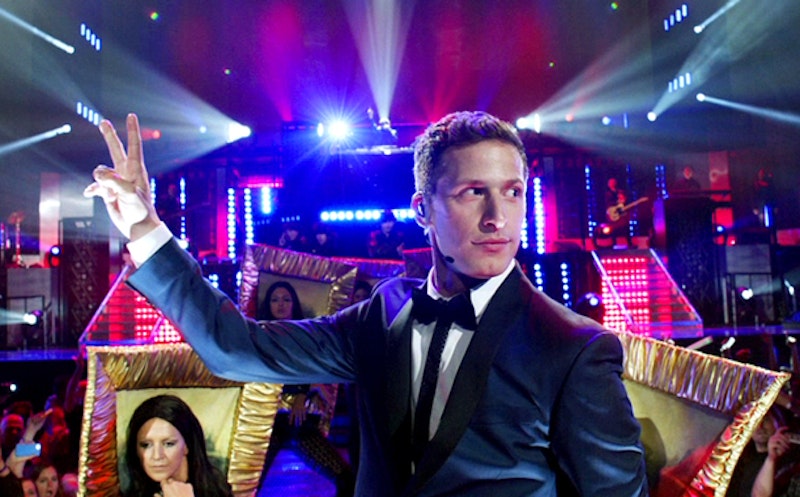 When considering Popstar, a trio of specific vignettes leap to mind. There’s the moment where Connor 4Real (Andy Samberg) proposes marriage to fiancée Ashley Wednesday (Imogen Poots); it’s a pre-packaged media spectacle, complete with leashed wolves and Seal serenading the couple. Trouble is, Seal’s singing greatly agitates the wolves. The wolf handler brusquely conveys this to Connor, insisting that his employer shut the performance down; Connor isn’t having it, because it’s Seal. Pandemonium breaks out, and Seal’s savaged by wolves.

There’s the moment where Connor purchases an extravagant, Deadmau5-esque helmet for Kid Contact (Jorma Taccone), Connor’s current DJ and former bandmate; the unwieldy helmet is intended to expand the spectacle of an already megalomaniacal stage show to boost ticket sales, and is rightly described as “Optimus Prime’s dick.” There’s the moment where news footage captures a despondent Connor nodding off on a hoverboard in the middle of Los Angeles traffic as the hoverboard bursts into flames. (At yet another choice moment, Connor makes pancakes for his friends; I won’t spoil that one.)

If the modern pop-industrial complex is Popstar’s target, the movie gets more right than wrong: social-media narcissism as brand building, corporate-synergy insanity as survival, every wannabe-hit album requiring dozens of producers. But this is filmmaking that plays it too safe, hanging these inspired bits of lunacy—sure, there are more, but there should’ve been many, many more—on a pat, redemptive story arc; either Taccone, Samberg, and Akiva Schaffer didn’t watch This Is Spinal Tap often enough, or test audiences and investors vetoed a no-hold-barred Dada approach. For 86 minutes, Popstar is at war with itself, the batshit and the formulaic tussling, with the audience occasionally winning out. Connor winds up having to autograph a fan’s dick: win. Justin Timberlake’s not-as-himself cameos just aren’t funny: loss. The great Tim Meadows and Sarah Silverman cash paychecks: win. Bussing in a shitload of celebrities for authenticity and so they can be in on the joke: loss. Elsewhere, Connor’s mom is a coke fiend who goes on tour with Fall Out Boy; shouldn’t this merit more than just a throwaway mention? (See also: Taylor Swift allegedly committing murder.) Chris Redd’s turn as a fake Tyler the Creator is inspired, yet somehow drags on a couple minutes too long, while last year’s far superior Dope skewered meme-fication more accurately than this movie. I adore Maya Rudolph almost without reservation, but tonally speaking, she felt completely out of place here.

One final note. I watched Popstar alone, at an otherwise empty Saturday night screening that was the sole screening for that particular date. If a projectionist was on duty and that projectionist was laughing, too, I couldn’t hear it. The loneliness of this feels meaningful.