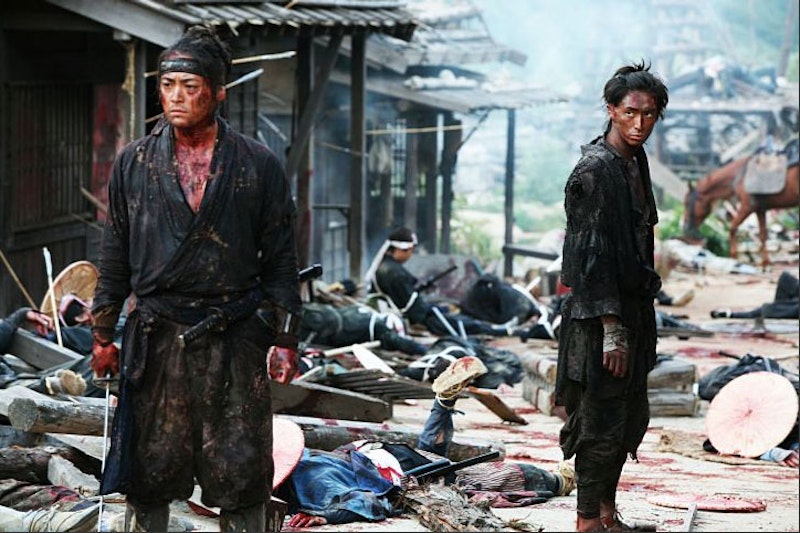 13 Assassins, directed by Takashi Miike, is a samurai movie dedicated to giving you what you expect in a samurai movie. Disturbing scenes of hari kari? Check. Old sparring partners reunited on opposite sides of an apocalyptic showdown? Check. Intense discussions of honor, honor, and also honor? Yes. Final endless battle scene between a very few and a whole bunch? Of course!

In addition, the film also has a truly dastardly villain: Lord Naritsugu Matsudaira (Gorô Inagaki). Naritsugu is brother to the shogun, and he uses his high standing to be extraordinarily unpleasant. How unpleasant you say? Well, of course, he rapes defenseless women. And then kills their husbands. While staying as a guest in the home of the guy’s father!

For most purposes, that would establish Naritsugu as a villainous villain and worth getting rid of. But! This movie is not sure that you are convinced, so it has him cut off a woman’s limbs and her tongue and then use her as a sex slave… and even that’s not enough. As a bonus, we get to watch him tie children up and make them watch their parents die before he shoots arrows into them.

The idea here, presumably, is to make Naritsugu’s crimes so heinous that eliminating him justifies virtually any amount of carnage. And diagetically, it works—cutting off an innocent girl’s legs and arms and tongue is pretty impressively vile even in the jaundiced post-Saw filmoverse. I was convinced that Naritsugu was a really bad guy, and that letting him get anywhere near the throne was a bad idea. If the shogun won’t act against his brother, somebody in authority should commission as many assassins as possible (sure, 13, if that’s all that’s available) to bring the bastard down. So good for the writers. They have achieved buy in.

Still, as the film rolled along towards its inevitable giant pile of stinking corpses, I couldn’t help but notice some… uncomfortable facts about our arch-nemesis. Specifically, Naritsugu isn’t a standard issue power-mad, scheming kind of villain. He doesn’t need to scheme for power, after all; he just needs to sit around and wait to inherit. He’s not Machiavellian. He just, as one character mentions, has a taste for “flesh.” He’s a dissipated sadist. He likes to hurt people because it gives him sensual pleasure.

As the film moves along, Naritsugu’s decadent sadist starts to drive the plot. Of course, as I’ve already noted, his evil nastiness sets the plot in motion in the first place. But at a couple of points he stops being merely the instigator of the carnage, and starts to actively push it along. His chief bodyguard, Hanbei Kitou (Masachika Ichimura), for example, urges Naritsugu to take the threat from the 13 assassins more seriously. But Naritsugu is having none of it… in part for reasons of honor, but mostly just because he thinks it would be fun to have a big battle. Do the “foolish” thing, he urges Hanbei, who looks as if he’s just been asked to swallow his elaborate hat.

Even in the final battle, Naritsugu behaves less like a man in danger and more like a man… well, like a man watching a movie. As his soldiers die around him, he declares the spectacle “magnificent”—which there’s no doubt it is, visually—and muses on how wonderful the days of war must have been before the shogun established the peace. He tells Hanbei, with an air of dreamy enthusiasm, that when he’s on the shogun’s council he’ll bring those days back. And when the fight is over and he finally realizes things may not turn out all that well, Naritsugu is still enthusiastic about the spectacle. “Of all the days of my life,” he declares to his conqueror as he bloodily expires, “this has been the most exciting.”

Perhaps most importantly, Naritsugu is like the audience in enjoying the pageantry of honor while being utterly without honor himself. He is happy to deal death, but faced with death himself he screams and whines—which I presume is what most of my fellow audience members and I would do in his place.

I doubt Takashi Miike necessarily intended Naritsugu to be a portrait of his public—or of himself for that matter. It seems like it’s just an unavoidable structural serendipity. The audience of a war film wants to see war, and is, indeed, the reason the war is being staged. That aligns the viewers with the bad guys; the ones causing the trouble. It’s for our amusement that people get their limbs hacked off and the noble die terrible (but honorable!) deaths. All in make believe, of course. We’re not really as bad as Naritsugu. If we could bring back the age of war, we wouldn’t. Which is why, naturally, we are not fighting any wars at the moment.