Everything Must Go isn't helping. 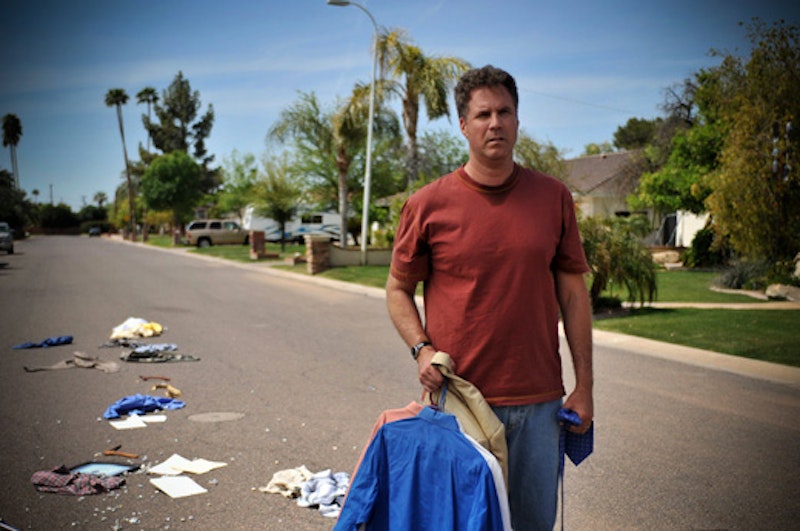 Will Ferrell’s a vastly under-utilized actor: though he usually settles with whoring himself out to insulting homoerotic bro comedies, from his time at SNL Ferrell has struck me as a potentially great black comic actor. His warm, paternal affability contrasts with a deeply bitter and venomous streak of rage bubbling just underneath the surface. With a little less comforting goofiness, he could be a powerfully affecting dramatic actor. Unfortunately, he’s yet to attempt anything as intense or dark as Adam Sandler in Punch-Drunk Love, or any of Bill Murray’s recent films. The guy’s 43, and I think we’ve all seen Ferrell scream and make penis jokes enough. Everything Must Go, where Ferrell plays a relapsing alcoholic who loses his job and his wife on the same day, shows that he’s trying, but this film is a total non-entity.

Ferrell’s estranged wife has left all her husband’s crap on their lawn, and without a working key to the house anymore, Ferrell’s Nick Halsey makes himself cozy on the grass, wanders about, and drinks himself to sleep (exclusively with PBR—what genius came up with that product placement?). This is the movie’s main problem: there’s absolutely nothing for Ferrell to do. Other than tedious and banal interactions with a few neighbors, Halsey mostly acts like someone in a diluted and de-clawed SNL sketch. Even when scrounging for beer money, or dealing with agitated cops, Ferrell can’t escape the light-hearted silliness that he’s employed his entire career. Even though he’s a longtime drunk and swilling beer for most of the movie, Halsey never appears incoherent or even intoxicated; he just seems like a guy who’s had a rough couple of days.

Nothing happens in this movie that we haven’t seen before. Ferrell’s character goes through every expected change and follows a classic movie alcoholic’s arc. The script feels like it came straight out of Screenwriting for Dummies. What I don’t understand is how someone can write such a script with such a strong set-up, and then orphan it with the blandest exchanges between characters that suck the soul out of everything.

Halsey’s pre-teen neighbor Kenny rides his bike all day and wants to learn how to play baseball, but he’s scared because other kids make fun of his weight. Samantha, a pregnant photographer from New York who’s husband is AWOL, warms to Ferrell and takes to talking with him on his lawn until he guesses that her husband is a philandering drunk off with another woman. It all feels so frustratingly boring. I’m sick of movies that stick to tropes and techniques of the past over experimentation and variation. When watching a movie, I like to feel like I have no idea where it could go next, and in Everything Must Go, every move is predictable. That’s just no fun.

Yet, it’s worth checking out just for Laura Dern’s cameo. She’s still gorgeous.